"I'll be in Starbucks in a shit hat!" was the text I received from former Town player Nick Hegarty as I made my way to meet him for the interview. His choice of venue and acknowledgment of iffy fashion wear immediately increased his likeability factor - something we spoke about during an hour-long discussion on his time at Grimsby.

"I think some fans liked me, others didn't," was his assessment. "And that's fair enough. Football is full of opinions and it's unrealistic to think everyone will like you as a player. But off the field - on nights out or just around the town - the fans were always great to me. I mean, did you see those Hegativity T-shirts? That was quality. Whatever fans thought of me as a player, I think the whole Hegativity thing showed that they knew I gave my all when I played. I was really disappointed to find out that they never made the T-shirts - I'd have been their first customer!" 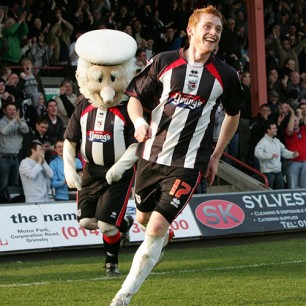 The former Town left winger flew out to Australia earlier in 2012 to continue his football career with Victorian Premier League side Hume City. A serious injury had prevented him from making an impression in the Scottish Premier League with St Mirren. "I signed the contract and went straight into the team," recalls Hegarty, "which was great because I just wanted to play. I started the first three games and it was in that third game that I broke my ankle.

"It was already feeling a bit sore so I started the game with it heavily strapped. I put in a block tackle and remember feeling a lot of pain. My foot went numb so I took a few seconds stamping down to get the blood flowing into it. Like an idiot I tried to play on - I even took a corner with it. After that I knew I had to come off, and then when the strapping was removed I saw my ankle bone sticking out. That pretty much put me out for the season.

"I'd moved up to Glasgow in the summer only to spend almost the whole year on my own. It was at Christmas when I realised there must be somewhere else I could be. It was just so lonely. After speaking to Aaron Mooy at St Mirren, who was from Australia, I got my agent to look into the possibility of me playing down under and it all went from there."

Hegarty signed a one-year deal at Hume City and says things are going well. He said: "It's been a very fast four months but I've carved out a little life for myself. I've been given the vice-captain role, which is great. It's classed as part-time out here but we train three to four times a week so it feels very close to being full-time. The standard is mixed, with good and bad teams, route one and total football teams, so there's a bit of everything. To keep myself busy during the days when I don't train, I coach at a Brazilian soccer school in Melbourne, which has just started, and I do a bit of web design too."

Buckley was relentless. He was positive with everything he did

Hegarty made his first-team debut for the Mariners as an 18-year-old in a 4-1 win at Kidderminster in 2005, when he replaced Andy Parkinson as a 7Second-minute substitute. His three appearances the following season, when Town reached the fourth division play-off final, all came from the bench. It wasn't until Alan Buckley returned to the club for his third spell that Hegarty's career really took off.

"What a man," recalls Hegarty, trying his best to disguise a surreptitious grin. "He was something else. He was the manager that really made me feel like I had made it; like I was a pro and that I was truly part of the first team. I'm smiling now, you see - I can't help it. I thought he was great.

"He was relentless. He was very positive with everything he did. He expected you to give everything you got. Some of the fans will have seen and heard the way he was from the dugout - he was always on my case, and he would always give Danny Boshell an earful too. But he'd always play us. He wanted to make us better players and get the best out of us. He demanded it. I was part of his team and his plans, and that really brought my confidence on a huge amount.

"He was brutally honest. I mean, he'd put you in your place. I saw him being honest to such a degree that he broke some of the youngsters' dreams. Having said that, you could also be very honest in return. You could trust him. I felt I could trust him with my life."

Hegarty has plenty of fond memories of the Mariners - particularly his debut goal, which came in front of the Pontoon stand in a Boxing Day fixture against Accrington Stanley. "I remember it well because it was with my right foot. I thought the moment would never come. I had been in the side a while but not scored, so when it hit the back of the net I just felt pure joy. All of my family were there to see me play that day, so to score in front of them was special. It made me feel very proud.

"I also remember a game at Brentford earlier that season when we won 1-0. There was a scramble in the very last minute of the game and I managed to clear the ball off the line. There's a picture of it somewhere on the internet - it's probably my favourite picture. There are bodies literally on the line. We'd just lost quite heavily at home to Darlington the previous game so I felt that result probably kept Buckley in his job. It was the first time I had played as a wing-back in the formation that worked well for us for the rest of the season."

As for the penalty, well, I just stood my ground and [the Franchise] player went down like a sack of shit

It was a season that ultimately led the Mariners to Wembley. Despite a 2-0 defeat to Bastard Franchise Scum, Hegarty reveals that there was a real sense among the Town players that they had worn down the opposition. "I know it might sound strange given the way they battered us for the first 70 minutes but just before they got the penalty I remember James Hunt saying, 'Come on - these lads have gone'. We all felt it.

"As for the penalty, well, I just stood my ground and their player went down like a sack of shit, but we were all convinced that they were offside in the build-up. I think that gave them the goal they probably deserved but we definitely felt that, at 0-0, we had worn them down. We had more in the locker but that penalty knocked the stuffing out of us."

After a difficult start to the following season, in which the Mariners failed to win any of their first seven games, Buckley was sacked and replaced with Mike Newell. On a night when the new boss was in the stands at Glanford Park to watch his new charges in a Football League Trophy match against Nigel Adkins' Scunthorpe, Hegarty netted in front of the travelling support. It proved no more than a consolation goal in a 2-1 defeat but the goal was coupled with a gallant second-half performance.

"That's another moment I remember very clearly," he says. "The support that night was just amazing. The ball ran loose onto my left foot and even though I was quite wide and the angle was tight I just caught it sweetly and lashed it into the net. The fans were just there, right in front of me - almost on top of me. It's hard to describe in words how it feels to score in front of your own fans in a local derby. I just remember thinking that we were back in the game and the supporters just stepped the noise level up even more. It was a great game to play in."