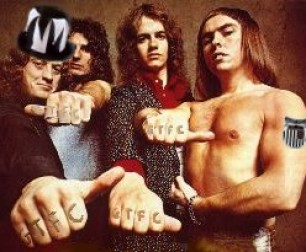 Legendary glam rockers Slade are to take the reins at managerless Grimsby Town FC, according to sources close to the club. Lead vocalist Noddy Holder is set to be named as manager, with guitarist Dave Hill joining him as assistant. Stomping rhythm section Don Powell and Jim Lea will take over as youth team coach and football in the community officer respectively.

The appointment comes after weeks of turmoil as the club endeavoured to find a new manager. The Mariners were apparently turned down by an unnamed band for the job earlier in the week. Although not confirmed, it is rumoured that the high-profile band offered the job were Slade's 70s glam counterparts Kiss - with make-up demands said to be the stumbling block in negotiations. Gene Simmons was unavailable for comment.

Town chairman Peter Furneaux, interviewed on Galaxy FM, would not name the band that cancelled negotiations at the last minute but did reveal that Slade - who clocked up three number one hits in 1973, while Lawrie McMenemy could only take GTFC to the third division - were now favourites to take over at Blundell Park.

"After our original target let us down at the last minute we've had to approach others on our list," said Mr Furneaux. "We shall be speaking to Slade tomorrow morning to see if they can take the club forward. I spoke to Gary Glitter this morning but unfortunately he couldn't take the job because of prior engagements."