This is what I did on 8 May 2004. I went to watch Town play Tranmere. And get relegated. I had a lot to drink and I went on some trains. I took my crappy little digital camera, and wrote stuff down. I don't know why, but I just wanted to record it all.

10:00: Leave house. Ill with anxiety. 10:23: Arrive New Street station. Potter around the shops in the Pallasades before they all get closed down because of the Bull Ring. Sorry - Bullring. Get 40 quid out. 10:33: Board train. Carriage is quiet, occupied mostly by senior citizens and Daily Mail readers. No loud Burberry boys, although the Mail readers would probably like to have me shot.

10:47: Train leaves, snaking out through Smethwick, back to within half a mile of my house. Think of that line by WH Auden: "Clearer than Scafell Pike, my heart has stamped on/The view from Birmingham to Wolverhampton". Read in the paper that rumours of Ruud van Nistelrooy's transfer to Real Madrid are being supported by "leaks from his circle". Ewww. Pass through Tipton, butt of much vicious West Midlands humour (eg. "What's the definition of a carrier bag? A Tipton briefcase").

11:03: Wolverhampton. Platform dead quiet. Nobody's leaving town; not even Henri Camara. 11:09: Feeling a bit tired for the first time. Give up reading the paper. 11:18: Text from Mat Hare, who is going to a wedding in Ipswich and, it turns out, staying at the same hotel as Lennie Lawrence and his Cardiff team, who are playing the so-called Tractor Boys tomorrow. "Cue abusive phone calls to LL's room!" Train stops at Penkridge. Where? It's two streets, a cemetery, a football pitch and some cows. 11:23: Stafford. Who do people support here: Stafford Rangers, Wolves or Stoke? Man United, probably.

11:43: Crewe. Could Buckley have been Town's Dario Gradi? Whatever else you can say about him, we would never have got into this mess had he still been manager, and our current sorry status underlines what a disaster for GTFC the Huxford/Everitt putsch has turned out to be. A girl walks past in T-shirt and jeans and a name badge in the shape of a large dayglo orange phallus. The humour of this makes sense only to the rest of the hen party that's starting in the next carriage, and now that she's outside of that enclosed frame of reference, in the rest of the world, she is embarrassed. It's a bit like being a Grimsby fan in Birmingham. Or in Grimsby.

11:46: Text from Mark Stilton: what time am I arriving? For some weeks now Mark has been ensuring I will go to this match by dangling Doctor Duncan's, a Liverpool pub which serves the mighty Cains Formidable on draught. 11:52: Hen party briefly drowned out by the loudest text message notification in the world, from the vicinity of the Daily Mail reader opposite. It probably carries subliminal messages that brainwash all those within earshot into supporting tax cuts for the rich and hanging for working mothers. 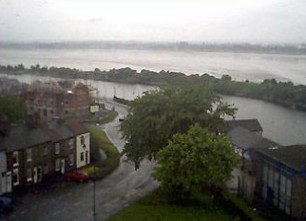 View from the Runcorn-Widnes bridge

11:54: Text from my girlfriend: "come on the town! hope you feelin better see ya later sexy cx". It is a measure of how preoccupied I am with the fate of the Mariners that, instead of every seven seconds or whatever it is, I haven't thought about sex all morning.

12:03: Runcorn; train crosses the Runcorn-Widnes bridge over the Mersey. Factories, containers, Jaguar, B&Q warehouse; Merseyrail stations; five-a-side pitches. 12:30: Liverpool Lime Street, a nice, spacious, airy station like Kings Cross, and like New Street used to be, decades ago before they built the Pallasades on top of it. Met by Mark Stilton. Led to Doctor Duncan's: a pub of quite extraordinary beauty. Drink pints of Formidable and Cains 2008, brewed to celebrate Liverpool's forthcoming stint as European City of Culture. Brief feeling of contentment. Not for the first time, I wish we didn't have to go and watch Town and could stay in the pub all day instead.

14:15: Plunge gingerly into the bowels of Lime Street station. Subterranean Merseyrail bit could, er, use a lick of a paint. 14:28: Board train. 14:42: Arrive Rock Ferry. Accompanied on walk to ground by a lad from Hull who was at college with Chris Bolder and Graham Hockless. 15:07: Arrive Prenton Park. Oops. Find three seats together but a dozen rows in front of Miles Moss and Pat Bell and nowhere near Mr Tony Butcher. 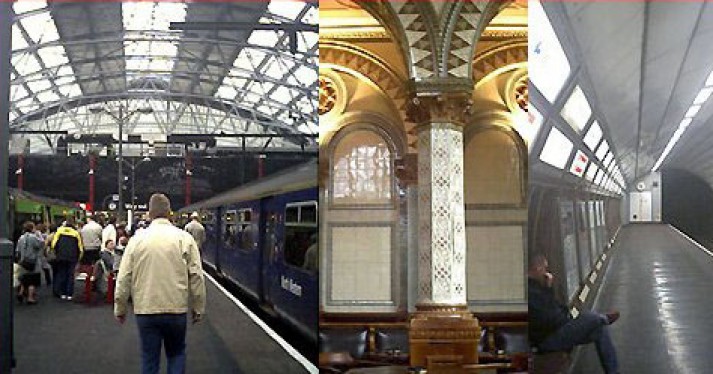 15:24: Mansaram scores after excellent work from Rankin, who is far too good for Division Three. Stilton accidentally punches me in the eye as we celebrate. At least I assume it's an accident. Either way, I mentally note never to get on the wrong side of him. The fact that I am still able to see proves a curse rather than a blessing, as Town's presence in the game as an attacking force is over. 15:48: Half time. Discover, with some amazement, that I am sitting next to former Grimsby Telegraph match reporter John Kirkby, whose accounts of Town's evening and away games sustained me handsomely through the days when I was too young to be taken to either. Discover, with still greater amazement, that John is a fan of my Grimsby Telegraph column. Or else he's very very polite. 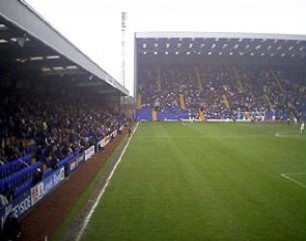 Seated close to the, er, action

16:46: Simultaneously informed by Grimsby and Tranmere fans, and by my girlfriend via text message, that Chesterfield are beating Luton: always the nailed-on cert of today's fixtures, the fact that it comes with only two minutes to play is neither here nor there. With Brentford and Port Vale winning as well, I only need Town to equalise for all four lines of my bet to come in. 16:49: Kirkby observes that the Mariners' ineptitude is all the more disappointing given the home side's reduction to ten men. So complete is this ineptitude, in fact, that I'd entirely forgotten the home side had been reduced to ten men.

16:52: That's it, then. A dozen Grimbarians relieve their frustrations by twisting their faces into funny shapes and bellowing "No surrender to the IRA" at a Tranmere fan and his two little children. Oh, I see: he's got an Ireland flag. We have such a deep first-hand understanding of the whole Irish issue from our close vantage point in Grimsby, don't we.

17:00: Switch phone off. At around this time for the last few Saturdays, it's kept coming up with that 'network busy' thing that you normally only get on New Year's Eve; and I don't want to talk to anyone anyway. 17:20: Lost on the Wirral on the way back to Rock Ferry station. Helped out by friendly locals. Find a shop that sells cheese and onion pasties. 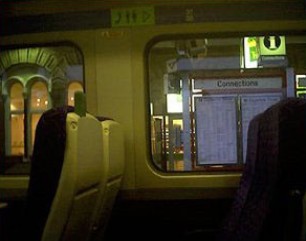 Don't all rush back to Birmingham at once

17:44: Arrive Rock Ferry station. Reach platform just as train to Liverpool departs. Sit in silence. Turn phone back on. Take sympathetic call from my girlfriend. 17:59: Next train to Liverpool. Time for a pint and a couple of whiskies at the Head of Steam, back on Lime Street station, where Reds fans are watching on big screens as their side beats Birmingham. Find a licensed retailer; obtain overpriced Stella Artois. Board train. 18:49: Train departs. 18:50: Receive another copy of my girlfriend's text message from two hours ago informing me that Chesterfield have scored and Town are relegated. Ta, Vodafone.

18:52: Text from Tim 'Black And' White, drinking buddy and fellow midland Mariner, who over recent seasons has organised spectacular minibus trips from our local to Town matches against Birmingham, in the first division, and more recently Chesterfield in the second. "Well a trip to cheltenham doesnt sound 2 bad".

19:21: Start planning Cod Almighty's rough guide to Division Three. 19:24: See a union jack flying at half mast. 19:28: Text from my mate Critch, whose band have just reformed and are playing their first gig in four or five years in Grimsby tonight, which I wouldn't have been able to get to in time after the match. "You should have come to see The Nannas. We're already Premier League." Vow never again to put football ahead of music. 19:42: Text from Sam Metcalf: "chin up comrade". 19:58: Stafford again. Am nearly asleep. Four lads get on the train with fish and chips. Train smells really bad. 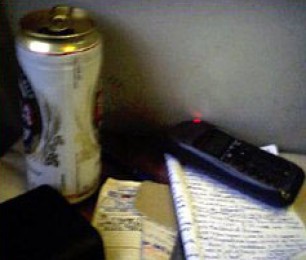 20:10: Phone GTFC to leave message not to renew Nicky Law's contract. Scandalously, the automatic answering thingy does not present such an option. The option to listen to Peter Furneaux's statement about the club's quarrel with the Grimsby Telegraph last September remains hugely prominent on the menu, however; so they're either still really pissed off about it or nobody has been arsed to change it yet. Or nobody knows how.

20:22: Wolverhampton. Drunk. Notes from this section of the journey read: "Where's the cat? Mercury Rev."

20:39: Birmingham New Street. My girlfriend is here to provide support, both emotional and - given the way my legs are not working quite as they ought - physical. Shuffle towards Flapper & Firkin to watch some bands. Enter the venue. Rob, the promoter, shakes my hand and commiserates warmly on my relegation. Listen to band. 35 Seconds have gone a bit rock. Get a pint. Seb from Distophia asks if I'm getting a new band together yet. 21:30: Outside, on a bench, alone, crying into my beer. Am going to miss Panda Love Unit. Taken home via Chinese takeaway. 23:30: Bed.

Sunday morning: Repeatedly throw up. Teatime: Go to the pub. Congratulate Chesterfield Dave. Chesterfield Dave gives me a bear hug. Tell West Brom fans I think they'll have a good chance of staying up. Think about it, and change my mind. Accept pint from plastic Man U fan and sympathetic pats on back from all and sundry. Consult with Tim on next season's trips to Cheltenham and Kidderminster. Agree to support Shrewsbury in Conference play-off final.