Things you only know if you're from Grimsby 1

1: Grimsby is not in Yorkshire

Grimbarians are, by and large, a static people; yet there have always been a few who, for reasons best known to themselves, decide that the world, rather than Pier 39, is their oyster, and hotfoot it out of their hometown the very moment the job offer or the UCAS form drops through the letterbox. These restless souls are invariably shocked to discover many beliefs in the wider world that have never gained currency back in Grimsby. Most of these are perfectly truthful - take, for instance, the idea that ethnic diversity is entirely natural and indeed really quite nice - but one or two are erroneous, and the faithful Grimbarian exile has a duty to correct them.

"So whereabouts in Yorkshire is Grimsby?"

"Grimsby is not in Yorkshire." 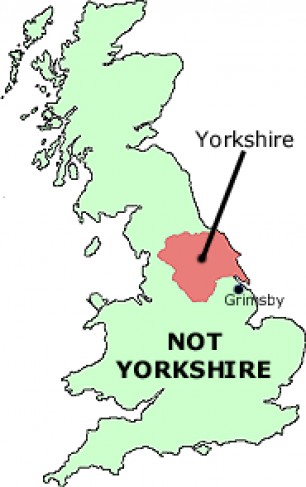 "Grimsby is not in Yorkshire" is not one of those subjective, poetically licensed claims of geography by which people express regional pride or national identity, and/or various degrees of dissatisfaction with existing administrative arrangements. It isn't like saying "I'm from Texas - which country are you from?" or "Death to the Leicestershire imperialist scum! Freedom for Rutland!" It is a straightforward statement of fact. Grimsby is not, nor has it ever been, part of Yorkshire.

So maybe it's something else that confuses people. Maybe it's because nobody actually knows where Lincolnshire is. Except weather forecasters. Weather forecasters gleefully flaunt their unique knowledge of the county's obscure location. "Except in the east," they will say smugly, with an indicative flap of the wrist that recalls Rhys Wilmot dealing with set pieces, "where the temperature stays cooler from east Yorkshire, through Lincolnshire, down to The Wash." But nobody else knows. Is it down south? Not with the likes of Grimsby and Scunny in it, and Lincoln for that matter. The north-east? No, that means Geordieland. East Anglia? Not quite. East Midlands? Er, no - not with 100-odd miles of coastline. The peculiar truth is that Lincolnshire is one of the largest English counties and absolutely no bugger knows where it is.

There are also a number of important cultural differences between Grimbarians and their Yorkshire counterparts, which can be pointed out to the innocent outsider to clarify the issue further. Grimbarians are given to boasting that they enjoy the finest fish and chips in the world; but it is Yorkshire people who actually run their chippies. Supporters of Grimsby Town FC still join together in an ancient and holy chant praising a revered figure who violently murdered over a dozen Yorkshire women in cold blood; while 'Yorkies', as the Lincolnshire contingent call them, are less inclined to celebrate the achievements of the Yorkshire Ripper. 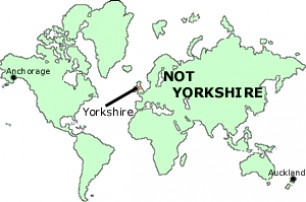 Granted, Grimsby is near Yorkshire. And in certain matters, near enough is good enough. Your dinner guests will probably not be able to tell whether the risotto was made using two heaped or two level teaspoonsful of oregano - especially if they are from Yorkshire. Or Grimsby. But physical geography is an objective science, not a subjective art; and place is a binary matter of yes or no, in or not in. Start introducing shades of grey and you run the risk of conflict, as anyone will testify who has mistaken a Canadian for an American or a Kiwi for an Aussie and lived to tell the tale. So even if Grimsby is 'near Yorkshire', it is still no more 'in Yorkshire' than Auckland or Anchorage are. It is no exaggeration to say that wars have started over less.

Is there a Thing you only know because you're from Grimsby? Use this form to tell us, and we might use it if it's any good.