Things you only know if you're from Grimsby 4

You only know stickleback are really called 'struts' if you're from Grimsby. Just as you know male struts, when their bellies turn to a deep scarlet colour in the mating season, are really called 'red doctors'. Or for all I know, you've never heard these terms in your life and Kristian was just making them up.

Kristian lived round the corner from where I grew up, by Grant Thorold Park. Like many Grimsby kids our age, we shared an interest in all things piscine, which extended from gawping through glass at guppies and gouramis to trooping around Cleethorpes on long Sunday afternoons with a couple of those flimsy nets that Yorkshire daytrippers buy from that shop on the front by the Liberal Club - just across from where Willy's is now. Struts could be trawled in their dozens with these things, in the Boating Lake (the bushy shrubby things that grow over the water's edge provided particularly fruitful fishing grounds) and in Chapman's Pond. You would put your catch in a jar from which the corner shop had recently vended coconut mushrooms or aniseed twist by the quarter-pound, take the fish home and, basically, watch them die.

(In those days, I ought to point out for younger readers, the Atari 2600 was a technological marvel priced well beyond the average family with children at Old Clee First School, and wasting entire months of one's life tapping out drivel over MSN was only the sort of foolish dream Kieran Prendiville would excitedly articulate halfway through Tomorrow's World, in between features about protein pills and cars that would drive themselves. In other words, to borrow a term from earlier generations, we had to make our own fun.)

One day, as the struts accumulated in our jars and the shadow of that cooling tower that you can still see from the Pontoon lengthened across Chapman's, Kristian turned from skimming stones, pointed back over his shoulder towards the pond, and said to me: "You don't wanna fall in here!"

He was right, you know; I didn't. But Kris's seemingly pointless statement was delivered with that intonation that says: "I'm going to tell you something a bit more interesting, but you have to prompt me to do it." So I enquired of my friend as to exactly why I didn't wanna fall in there, with full faith that the reply would amount to something infinitely more enlightening than "Because you'll get wet, stupid".

"It's bottomless!" uttered Kris, in a hushed tone, as if speaking too loudly might somehow create a movement of air that would throw us both helpless into the fathomless vortex before us, there to swirl and splutter for all eternity in a watery prison of chaos, vengeful stickleback, and abandoned supermarket trolleys.

In years to come I would discover that my partner in strutting was far from alone in his belief that Chapman's Pond continues downwards infinitely. In fact, it is an oft-repeated item of local folklore, along with the peculiar conviction that there is no such thing as a Grimsby accent, and that 'pantomime' is actually pronounced 'pantomine'. Actually, that last one might just be my mum.

But you get the idea: that, perhaps because of the area's maritime heritage, Grimbarians are more than averagely inclined towards superstition and quirky thinking. Some might describe us as gullible. This may be taking it a little far, but it would at least explain how the Grimsby Telegraph can get away with stories like 'Dock Tower to be demolished by EU bureaucrats to make space for luxury 12-bedroom apartments housing asylum seekers and paedophiles who get free champagne and Playstations'.

This tendency towards superstition does not stop at the gates of Blundell Park, where fans are adamant that goalkeepers must under no circumstances be allowed to wear green. Again, this stipulation is thought to derive directly from Grimsby's seafaring traditions: a trawlerman swept overboard while wearing green was as good as doomed, since this colour would apparently make it nigh impossible for rescuers to spot him among the waves. This is clearly going back quite a while, because these days the colour of clothing most likely to make a drowning mariner inconspicuous in the heavily polluted Humber estuary would be a sort of grubby, sewage-tinted brown. 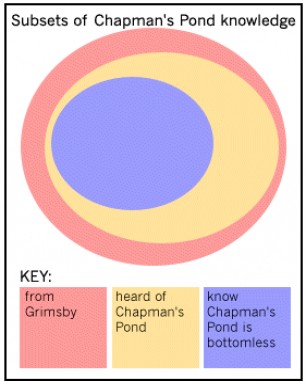 So are we to assume that by using the word 'bottomless', Kris meant that the pond extends through the Earth and way beyond, forever, into the boundlessness of space? An infinitely narrow cosmic channel of water a couple of hundred yards across and countless trillions of light years in length? I'm not buying it, and on 20p a week pocket money I don't expect Kris was either. Everyone knows water can't exist in liquid form in the coldness of space, and there'd have been a load of letters to the Telegraph saying it was all very well the council doing something nice to attract tourists but it would only get vandalised by those terrible kids from the Betelgeuse estates.

If we instead interpret 'bottomless' as implying that Chapman's Pond simply reaches down through the bowels of the planet and pops out at the other side, then our next concern must be whether the point on the surface at which it would re-emerge is, in fact, covered with water and not land. The Cleethorpes side of the pond lies at 53 degrees, 33 minutes and 58 seconds north of the Equator and zero degrees, two minutes and 19 seconds west of the Greenwich Meridian. Assuming that our bottomless pond runs straight down through the centre of the Earth (perpendicular to an imaginary horizontal running across its surface), it would emerge at the same latitude south and 179°57'41" east.

Happily for Grimbarians, this is in the Pacific Ocean, 400 miles from the closest land (Campbell Island, which is invisible under most climatic conditions) and 600 miles south-east of Dunedin, New Zealand. Less happily, any geophysicist will tell you that both the pressure and the temperature at the core of the planet would vaporise any nearby water within milliseconds, and if Chapman's Pond were to suddenly become bottomless then a huge plume of steam would tower several hundred feet above Cleethorpes, followed by a treacherous eruption of magma from the Earth's mantle, burying northern Lincolnshire under hundreds of millions of tons of ash. A humanitarian, environmental and economic catastrophe, sure, but if it kicks off next time Michael Reddy 'goes down' in the other team's 18-yard box then then it'll be the best excuse ever for missing a penalty. 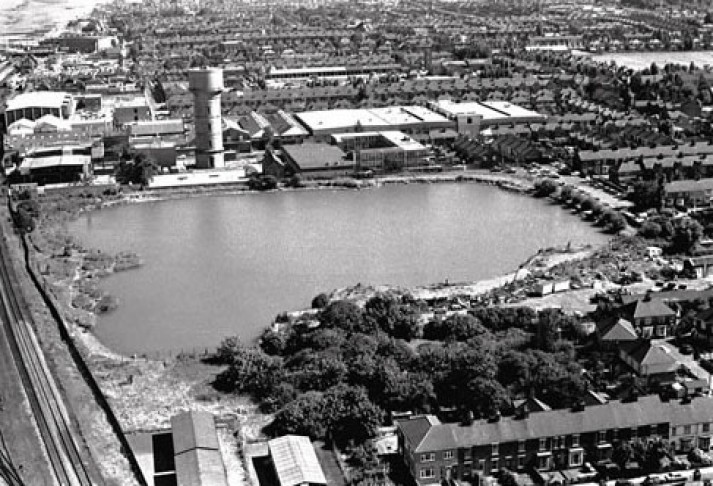 We will have to content ourselves with the knowledge, then, that Chapman's Pond, although clearly possessed of a lower limit, is very unusual in that it is a substantial natural body of fresh water within a very short distance of the sea. This is not something geographers see every day. Not very snappy, admittedly. Perhaps we need to start a rumour that the Dock Tower is made of chocolate.

Me, I never believed it in the first place. Well, I might have given Kris the benefit of the doubt for a few minutes, but only until he pointed out a rock I could place a foot on, in order to reach further out into the pond and catch more struts. It turned out not to be a rock but a piece of foam rubber. Chapman's Pond was not bottomless at all, it turned out, and with hindsight, being drenched up to the waist in mucky water was a small price to pay for the successful pursuit of scientific truth.

If you would like to comment on this article or series then please use the Cod Almighty feedback form. Ta.