Things you only know if you're from Grimsby 5

5: You're not from Grimsby

There I am: one of about 15 first-year English students squeezed into a seminar room about a fifth the size of the blokes' toilets under the Pontoon. It's already an unpleasantly muggy afternoon, and the heating's turned up full for the southerners. The campus is located in an edgy inner-city area on a six-lane dual carriageway, and despite the host institution having changed from a polytechnic to a university about three minutes earlier, my anticipation of tranquil, leafy academia is trickling away as readily as the perspiration rolling down everyone's faces.

Before we can get stuck in to some modern literary criticism and expose the phallocentric patriarchal subtext of the bus timetable, it is necessary to introduce ourselves to the group. First it's Adam from Watford; then it's Emma from Hatfield (it was a mysterious theme of my undergraduate days that approximately 98 per cent of all the other students I met were from Hertfordshire). Then it's my turn. 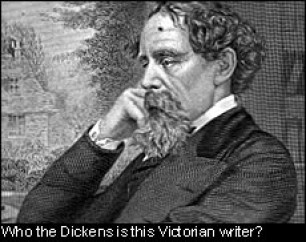 This was the first time I had ever said I was from Cleethorpes rather than Grimsby. I don't really know why. In those days I was yet to shake off the old working-class inferiority complex - an insecurity that comes very much to the fore in such situations as this - and perhaps thought Cleethorpes sounded slightly more like the sort of place where you might chat about Victorian novelists over a dainty cup of Earl Grey.

Either way, the blank looks I received in response determined that this would also be the last time I said I was from Cleethorpes rather than Grimsby. Grimsby may not be pretty, and most people may not have a clue where it is, but at least it gives you a distinct identity. (A couple of sociolinguistics lectures later, I even gave up trying to lose my accent.)

The only thing is: I am from Cleethorpes. Last time I looked, the boundary came in from the sea by Ronnie Ramsden's, ran down Park Street through Fiveways, and then bisected Carr Lane and, I dunno, Dugard Road? Or a bit further down. Until I was fourteen, we only just lived in Grimsby. Then we moved to a house round the corner, and we'd crossed the border into another town. And it doesn't matter that I'd always done my drinking, dancing, shopping and other important things in Grimsby's town centre, not Cleethorpes'. It doesn't matter because I was born in Croft Baker.

I've been on the phone to the NHS two or three times, trying to find out when Croft Baker first opened and closed down, how many people were born there and all that sort of thing, and they've been no use at all. Maybe it's because of the quirky way the NHS seems to be structured - half my calls were to an office in York, for some reason - or maybe it's just that the lazy bureaucrats who sponge off our public services would prefer to spend their time and money on the trivial matter of relieving pain and saving lives than return crank calls from some mumbling nutcase about a maternity home in Cleethorpes that closed down years ago, but my endeavours here proved sadly fruitless.

Rather than reliable historic data obtained from a first-hand source, then, we will have to rely for the purposes of the current inquiry upon subjective memories, untested speculation, and whatever my mum says. But hey - it's worked for the rest of this series, so why change now? 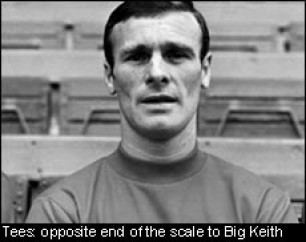 Croft Baker was the birthplace of a sizeable proportion of Grimbarians around my age and quite a few years either way. In the absence of authentic, verifiable facts with which to support my thesis, I'm going to take a wild guess that if your first visit to Blundell Park involved watching any player between, say, Matt Tees and Keith Alexander then there is at least a 50 per cent chance that you were born in Croft Baker.

When we're not jeopardising our relationships and marriages, our livelihoods, and our coronary health by working on this website, at no financial gain, for hours that would make the European Social Chapter's hair stand on end, just out of sheer love for you the reader, the Cod Almighty team sometimes enjoys a lively email discussion around a subject of mutual interest. On one such occasion a tongue-in-cheek debate centred around which of us could justly call ourselves 'proper' Town fans by dint of our birthplaces. The Grimsby-born contingent vehemently asserted this honour to be theirs, since the town of their origin coincides with the name of the club, but I maintain to this day that a certain desperation in their tone acknowledged that Croft Baker, since its location was only 15 or 20 minutes' walk from Blundell Park and, crucially, in the same town as the Mariners' historic home, is the birthplace of the truest GTFC stock.

So where was Croft Baker? For years all I could remember was that you turned off Clee Road into Wollaston Road, and it was up there somewhere. This is the sort of thing you always forget to ask your mum when you see her, and googling it is a complete waste of time (it sometimes seems as if the internet is like cultural diversity, in that North East Lincolnshire has definitely heard of the concept now, but still not quite got round to trying it yet).

The good news for our mission is that, although there's no longer a Croft Baker building where ladies make scary noises while they push babies out of their tummies, there remains a Croft Baker electoral ward on NEL council. Thanks to the British Survey website, we know that in the 2001 census its population was 11,677 (of whom just 1.4 per cent are of non-white ethnicity, as against 8.7 per cent for England and Wales as a whole), and that most of them work in shops and mend cars. The ward covers a geographical area of 214 hectares (I've no idea how big a hectare is, though; have you?), and thanks to the Communities Count website, we know that it "lies along the central part of the Cleethorpes coast, including the Central Promenade area, and inland across (south-westerly) to Matthew Humberstone School". There's something about the rate of teenage pregnancy being completely off the scale, but car ownership in Croft Baker is below the national average and is at the fourth lowest level of all wards in North East Lincolnshire, which makes it even harder to understand why all those Jeremy Clarkson wannabes stream out of Blundell Park "to beat the traffic" when there are still ten minutes left to play.

And then there was the time I popped round to see my brother in his new flat just before Town played Notts County in December 2004, and his new flat turned out to be part of what used to be the Croft Baker maternity home. He was now living where I'd entered the world. The place was at the end of Mill Road somewhere: the opposite end from St Peter's Avenue, where it comes out near that cemetery, or Trinity Road. Death, birth, GTFC, my little brother moving out from home at last... suddenly I realised that everything is circular - not just Andy Parkinson's running. 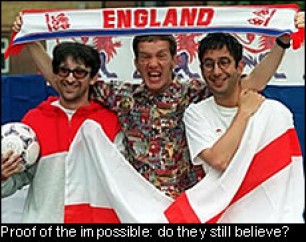 Though I'd decided, after those blank looks back on that overheated university induction day, that I was from Grimsby after all, and not Cleethorpes, there was a time a year or two later when it proved handy to evoke the hallowed name of the maternity home. It was in another sweaty room, but that was as far as the similarities went: this time it was Euro 96 and England were playing Spain on the telly in our madly overcrowded local. Fans had converged here from the breadth of the continent; we'd just wrapped up that amazing win over Holland; and if Baddiel, Skinner and The Lightning Seeds were top of the charts then anything was possible.

We crammed around tables as the goalless tension swelled. It was feverish, it was anxious, it was sweltering, and it was very loud. Beer was spilt, songs were sung. Football was coming home, maybe. As the English unison of the songs broke into separate voices, one bloke's in particular stood out. His accent rang oddly familiar on my ears... and what was that he was singing? Was it really "three fish on me shirt"?

Eventually I singled him out, and the curiosity was overwhelming. "Are you from Grimsby?" I asked him. 'Course he was, and a big Town fan as well - 140 miles from home. The unexpected problem was in making him believe that I was from Grimsby. Maybe I hadn't given up soon enough on trying to lose my accent; maybe all Grimbarians are born with a stubborn genetic defensiveness which makes us assume everyone is taking the piss until they can prove otherwise.

I scrabbled round comically for the password to prove my credentials. "Alan Buckley... Ivano Bonetti... " He wasn't having any of it. "The Dock Tower! Gulliver's!" Still no use. In growing desperation I eventually hit upon the only item of personal history that would prove to this cynical bugger that I wasn't just reeling him in as a prelude to some kind of third-rate fish joke - that I really was from the same place as him. If it wasn't good enough to insist that I was from Grimsby then, well, actually, I wasn't.

"I was born in Croft Baker!"

A decade later, Tim is still one of my best mates.

Share your 'born in Croft Baker' experiences - or suggest another Thing you only know if you're from Grimsby - by using the Cod Almighty feedback form. Ta.