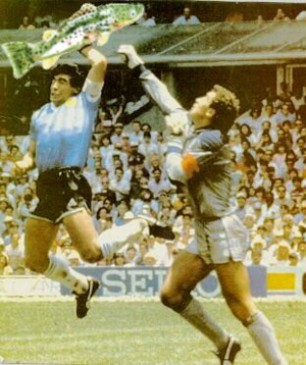 It seems a long time ago now, and a lot of the younger fans won't remember it, but there was a time when world-class footballer and sometime dope fiend Diego Maradona sang of his support for the super black and whites of Grimsby Town.

This first came to the public's attention in 1986 during the FIFA World Cup Finals in Mexico. A tense quarter-final match between England and Argentina ended in controversy – a match that has since fuelled much hatred between the two sides. In fact, Maggie Thatcher is thought to have started the Falklands War in 1982 because she knew Argentina would cheat against England in years to come.

The match had remained at stalemate until half time. Not long into the second half, the moment of controversy came. Steve Hodge went to clear the ball to safety, but being the middle-of-the-road, out-of-his-depth player he was, he managed to spanner the ball in the air in a Mark Lever stylee. Shilton raced out for what should have been a simple catch, with Maradona racing towards him.

However, at that very moment, Maradona produced his lucky memento – Grimsby's very own Harry Haddock – and used it to nudge the ball past Shilton and into the net. In possibly the worst ever decision in a World Cup, if you forget all the other bad decisions, Tunisian referee Ali Bennaceur let the goal stand. Maradona would later state that the goal was scored by "the hand of Cod" (he was never very good with the proper names for fish).

Bennaceur never refereed at a World Cup match again – some say because he paid no notice to rule 317b(ii) in the referee handbook: "All goals scored by rainbow trout masquerading as haddock should be disallowed."

Anyway, that was that, and a few minutes later Maradona ran around 32 England defenders before making the score 2-0. Lineker got a late consolation goal for England – probably a toe-poke or something, as is his wont.

Later, it was reported that Maradona was out on the razz, Town shirt on, Harry Haddock in hand, talking about the great players who inspired him like Matt Tees and Ron Rafferty. Town fans have been in two minds ever since – gutted that England lost, but happy that Harry got some worldwide fame.

It's rumoured that when he held the World Cup aloft, Maradona shouted: "Up the bleedin' Mariners". But someone may have made that up.