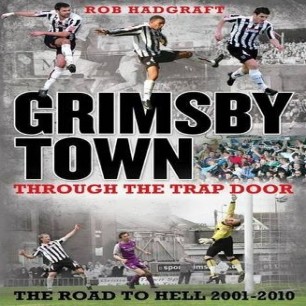 "Chances are you'll remember exactly where you were and how you felt on the night in 2001 when... England larruped Germany 5-1 in their own backyard. And if you are a Grimsby supporter, it's even more likely."

Still more likely than 1 September 2001, when Grimsby briefly led the Football League, Mariners will remember 8 May 2010, when we left it, although the fans of other clubs scarcely will. Three relegations in a decade are not enough to instil footballing solidarity, but that Desert Island Books has added Grimsby to Wrexham and Luton in its 'Through the Trap Door' series is at least a measure of national attention. Subtitling his book 'The road to hell 2001-2010', author Rob Hadgraft uses those two dates to frame his account of how we come to be playing in the Conference.

After a whistle-stop tour of the club's earlier history, the book offers a chapter for each season, recording the patterns of results, the comings and goings of players and managers, now and again pausing to dwell on the more significant matches and off-field developments. There is no new information here. Rob acknowledges his debt to the Grimsby Telegraph, to David Wherry's books and to Cod Almighty (he describes Pete Green as his fellow writer) and the Fishy, and presents no material that anyone who has been following the club for the last decade will be unaware of (although there are no doubt details you are glad to have forgotten).

Nor does Rob feel qualified to offer any analysis. He reports ("Many fans think [Lennie Lawrence] did a good job in tricky circumstances", "It was widely felt the Grimsby board had gone for the cheap option by appointing two men already on the payroll") but seldom evaluates opinions. An exception - "The appointment [of Mike Newell] won the approval of those canny fellows at the Cod Almighty website, a group whose opinions could normally be relied upon" - is perhaps best regarded as a dig (our 'Newell revolution' T-shirts are still available).

The book touches on the collapse of ITV Digital and the Mariners' outstanding tax bill, but it is left to Austin Mitchell's foreword, which admirably makes no attempt to dress up his interest in the game, to describe how "Grimsby Town is important to Grimsby" and to call, three times in scarcely more than a page, for a redistribution of football finances.

Within these limits, Rob now and again exactly captures the mood of a moment. Describing Town trying to hold a 2-1 lead against Luton in the midst of one of our long winless runs, he writes: "the nervousness... seemed to spread from crowd to players and back again, the seconds ticking slowly by". The rather cramped statistical summary of the 2009-10 season with which the book ends also includes surprisingly effective short summaries of every game, conveying more in two lines than the average Ceefax report manages in two pages.

However, there are also times when the narrative, bogged down in the recitation of facts, lapses into journalese ("Hartlepool's Anthony Williams breezed into town to fill the boots of genial Geordie custodian Aidan Davison who headed south to Colchester") and clichÃ©. Adding the word 'proverbial' succeeds only in drawing attention to a phrase ("somebody not to be touched with the proverbial barge-pole") worn out through overuse.

It is not only some of the writing that betrays evidence of haste. The first chapter, on the 2001-02 season, is among the most detailed, suggesting that later chapters were written more hurriedly, and almost the fullest account of any single player in the book is afforded to Portsmouth's Robert Prosinecki, for his part in Grimsby's first loss of that season. John McDermott's entire career is summarised in only a line or two more. Forty pages are devoted to photographs, and the captions to these are used to fill in some details of Grimsby players. But the selection is haphazard: McDermott doesn't feature, although some players get three pictures, and there is even space for players signed since we joined the Conference, including loanees Andrew Wright and Danny Carlton. One is left with the irresistible impression that the Telegraph photo editor handed Hadgraft the first handful of pictures he could find.

Nor is the book entirely free of factual errors. Rob Atkinson is re-christened Mark, and the 90th place we achieved in 2009, described as "Grimsby's worst finish position of all time" to that date, was one better than the 9First we finished in 1969.

Each chapter ends with a report on the "match of the season". It is a format that just about works for the League Cup win at Anfield, but is at its most effective when the match is the last of the season and Hadgraft is able to integrate the account of the game with its consequences. This captures some of the numbness that followed the relegation-settling defeat at Tranmere as well as our last League game at Burton, including the disorder that, in the eyes of many media commentators, forfeited our claim to sympathy.

However, it does scant justice to the season-transforming nature of the 6-0 win at Boston and, for the 2005-06 season, Hadgraft's usually sure sense of the major incidents, on and off the field, deserts him. Stripped of its context - the shambles in the week before the play-off final, when the announcement that Russell Slade would be signing a new contract was hastily withdrawn - the match report on the Millennium Stadium defeat to Cheltenham is rendered bland. That was also the season when Town beat Spurs, of course; one can't help wondering if some crude cut-and-pasting accompanied a last-minute decision to designate the play-off game as the match of the season.

However, Rob, nice as he is about the "passion, stoicism and humour of Town's die-hard fans", is not one of us. It is perhaps natural that he fails to convey the sense of collapse of the 2003-04 season, when so many of the sources of our self-respect were overturned - the loyalty between club and player, the aspirations towards constructive football - in the sad, final days of Paul Groves and the awful tenure of Nicky Law, or the sadness in seeing the promise of a succession of youth team graduates - Rowan, Soames, Mansaram, Taylor, North - buckle under their forced development.

It is also natural that the most evocative moments come when he quotes from his sources. The Poojah rant following the FA Cup defeat to Bath is reproduced in full, and Rob quotes Tony Butcher's match reports to good effect in the final minutes of the 6-5 victory over Burnley ("just noise, no discernible words, just a primeval scream") and the aftermath of the defeat at Tranmere ("Strung out behind us were the banners and flags proclaiming defiance, but the Town team, like the season, lies in tatters and rags").

Ultimately, the current generation of Mariners may not be the best audience for this book. Perhaps one day, when Grimsby Town have regained their place in the upper echelons of the Football League, and are once more making a habit of pricking the pretensions of city clubs with delusions of grandeur, we'll be glad to be reminded of how far we sunk, and of the place from which we rose. Until then, this book is a little act of footballing solidarity, a marker that our troubles deserve a wider audience. The 'Through the Trap Door' series is a tribute to the "passion, stoicism and humour" that unite every fan of a small-town club, and somehow make that club unique.