"Darius Vassell? Don't even get me started on Darius Vassell. Another one we should get rid of."
"You really think the Villa should sell Vassell?"
"No, I think we should release him on a free."

Much as I love Sunday afternoons down my local, I can't help thinking sometimes that they'd be even nicer without conversations like this. It's been said many times that Grimsby fans are a miserable lot - mostly by me, actually - but in the 4:45 Desolation Stakes they come in several furlongs behind their West Midlands counterparts. Between the eternal malcontents of the Villa and the Albion fans who want Gary Megson sacked (no, really), I can only clutch my Guinness tight, think of Lyons, Lawrence, Laws and Law, and mouth the words 'count your blessings' over and over again. 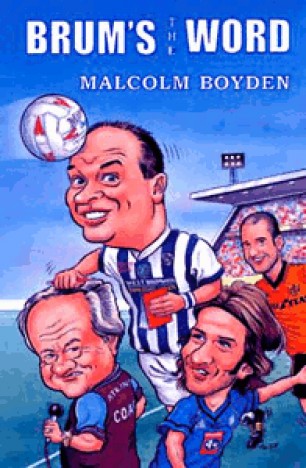 But with six league clubs on our doorsteps (Kidderminster is a 20-minute drive from this side of the city), misery fetishism is just one aspect of a rich miasma of local footballing life, and as a WBA supporter and radio and newspaper journalist Malcolm Boyden is well positioned to chronicle the minutiae of Birmingham fan culture. Damn it, even his name makes him sound like a roofer fixing up the Crossroads motel.

Nor is the author incapable of a nifty turn of phrase. Boyden is known to some Grimsby fans as the man who, during Town's 2004 relegation decider at Tranmere, described Nicky Law on Radio Five Live as "sweating like a glass-blower's backside": an image that is likely to remain in the memory at least as long as Law's inglorious reign at Blundell Park.

The breadth of Boyden's scope satisfies every expectation: from the Villa fan in charge of the Birmingham Royal Ballet to Steve Bull's dad running 'Variety Thursday' at the Tipton Sports and Social Club, the multiplicity and eccentricity of Midlands football tradition are done ample justice. There is Nigel Kennedy; there is bingo; there is a West Bromwich sweet factory making humbugs in Baggies colours. There is - almost inevitably, one feels - a taxi driver who writes a lot of bloody terrible poetry about Birmingham City.

For all the chucklesome character portraits, though, the more sombre moments are those that stand out. An interview with the widow of Jeff Astle - who died in 2002 from brain damage caused by heading footballs - is unbearably poignant. Aliou Cisse tells of losing 11 members of his family in a ferry disaster and still playing in Blues' next game - after asking Steve Bruce not to mention the tragedy to his teammates. When the player returned to St Andrews after the funerals, Birmingham fans, magnificently, used thousands of coloured cards to turn the Tilton Road End into a giant Senegal flag in tribute.

This material just about survives Boyden's inconsistent style, which at times becomes as disappointingly clunky and banal as the book's title. An aged policeman at Villa Park "belongs to the good old days when an officer could afford a smile while still keeping law and order." When Albion fans at Old Trafford sing: "My brother's shed is bigger than this," the author deems it necessary to point out: "Of course, it's rubbish - nobody has a shed bigger than Old Trafford." Thanks for clearing that one up, Malc.

Matters might have been helped had the editing been nearer half-decent than non-existent, but the standard set by the back cover ("Mowtown legend Edwin Starr") is maintained throughout, and you don't need to be Lynne Truss to be irritated by the misspellings and random capital letters that pop up every three or four pages. The front cover, moreover, is a thing of quite extraordinary ugliness: the book lies here on my desk and I have had to bury it beneath bills and bank statements to stop it putting me off my sarnies. Reasonable editing and design may be luxuries to a Â£1 fanzine, but when you pay ten quid for a paperback they are basic requirements.

Finally, Boyden is very keen on the idea that the 2002-03 season represents what he calls a "tipping point" in the local game, whereby Birmingham overhaul Aston Villa as the region's pre-eminent footballing power: a thesis that, just a year down the line, looks as flimsy as Darius Vassell's hamstrings. Brum's The Word, ultimately, is enjoyable but significantly flawed, and compares poorly with Mark Hodkinson's Life Sentence (the collected weekly Times columns about Rochdale's 2000-01 season, also from Parrs Wood Press).

Oh, and guess how Boyden, on the last page, describes a corpulent Albion fan watching his relegated team on the final day of the season? "Sweating like a glass-blower's backside".