Book review: Drinks All Round 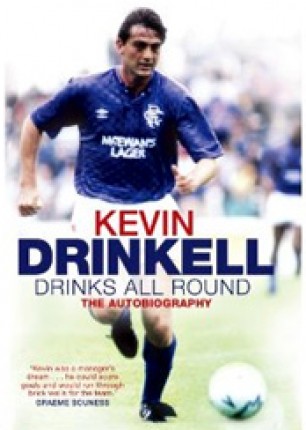 It would not be fair to describe Kevin Drinkell as a typical footballer of the 70s and 80s. Rather, he was the apotheosis of the quite successful professional who was kept from the limelight of international fame and glory, but who nonetheless managed a decent career. Kevin did what lots of other players did in those days. But he did it a bit better than most of them. He can now add to his better-than-modest achievements what should serve as a masterclass in the writing of a footballer's story for those of his contemporaries who are thinking of supplementing their pensions.

Here, then, are the rules of football autobiography according to Kevin Drinkell.

1. Make up a punny title

Anyone who has seen recent pictures of Drinkell will have been able to see for themselves that the title of his autobiography, Drinks All Round, is by no means simply a reference to the number of clubs and divisions in England and Scotland in which Kev plied his trade. The years have not been kind - though they might have been kinder had he ditched the smoking and drinking beloved of your average 70s footballer. Instead, Drinkell eschewed warm-ups in favour of a last fag in the toilets before the big games and in this volume his default location when not heading the ball goalwards from the six-yard box seems to be the pub. As his former Rangers boss Graeme Souness says warmly: "I just wonder what he would have achieved if it hadn't been for those 150 cigarettes a day."

2. Give a journalist the ghost of a chance

What Drinkell's publishers were paying for when they enlisted Scott Burns of the Scottish Daily Express to co-write the book is far from clear. It may well be the skill of a ghost writer to let the player speak for himself, but there must have been times here when Burns should have said to Drinkell: "Hang on, Kev. That bit makes you sound a bit conceited/bitter/naive/all three" - but he never seems to intervene. That Drinkell speaks honestly and plainly for himself is one of the strengths of the book. He's occasionally angry, funny, vainglorious and philosophical - but it's no thanks to Burns or his editor, who often can't even be bothered to point out the repetitions that appear on the same page.

3. Get Rothmans to help you relive the glory days

It's not only before the big games that Drinkell has sometimes need to lean on tobacco. Like lots of his fellow writers, Kev can always rely on the Rothmans football annual to remind him and you of the that all-important midweek clash against Carlisle when he was at Norwich. You don't remember? Well, it was the one where he scored the fourth goal, of course.

After all, as he reminds us more than once during his melancholy reflections on his barren spell at Coventry: "I'd been top scorer at Grimsby, Norwich and Rangers." That Drinkell took his chances in the box is undoubted, and the umpteen goals he put away for Town helped propel them to the kinds of giddy heights which these days seem like fairytales to our own children. But he was the centre-forward. "On a personal level," Drinkell will say at the end of his chapters, "I was quite pleased with my own performance," before adding: "but it didn't stop us being relegated/missing out on promotion again/bouncing along the bottom of the division."

When Father Ted receives the Golden Cleric award one year on Craggy Island, one of the priests assembled for the occasion is heard to whisper: "I hope he isn't going to use the occasion to settle old scores." And hours later, Ted is still taking vengeance on the enemies who have slighted him from the copious notes that fall, page by page, to his feet as dawn breaks. Drinkell has more than a few in his sights here - from the slights he received from people he had previously admired, like Emlyn Hughes and Jack Charlton, to the managers who belittled his talent (Sillett, the "fat, useless clown") and betrayed him at Coventry (Butcher "left me rotting in the reserves long after he was gone").

6. But remember, we're celebrating, so keep it light, eh?

Andrea makes regular, perfunctory appearances in this book, often tagging along towards the end of a chapter, just as she tagged along from club to club during Kev's playing days. That they remain happily married and that she makes it into the pictures in the middle with Drinkell's daughters is a testament to the affection he clearly has for her. But it's her absence that speaks loudest for her and that army of thousands of wives of professionals who played second fiddle to football through the course of their husbands' careers.

The football biography for a player of this stature is no place to say "Je ne regrette rien". "The one shortfall in my career," says Drinks, "was that I should have left Grimsby far earlier than I did." Quite reasonably, he thinks that this would have given him chance to get to a big club while he was still young enough to shine and "force open the England door".

But then there are plenty of other crossroads that might have led Drinkell to greater success: he rues the failure of Venables to take him to Spurs. He puts a brave face on the thwarting of Fergie's attempt to snap him up for Old Trafford. He wishes he'd stayed at Rangers when Mo Johnstone arrived - even though elsewhere he admits they would probably have offloaded him anyway. He even, briefly, laments the fact that he never got the chance to put himself forward for the Town job when Lennie Lawrence came in instead. Here can be found a litany of misplaced hopes and 'could have been a contender' moments. You might say that, as in politics, all footballing careers end in failure. But he's much more grounded than that. His own description of this biography - "local lad done alright" - sums it up nicely.

Finally, lest you've seemed big-headed, get some old pals to big you up at the end. There are sweet recollections here from people who genuinely consider Kevin to be one of football's good guys. It's the unintentional self-serving, though, that lights up what might otherwise have been a dull round of back-slapping. Witness, for example, Paul Wilkinson's killer ending which thanks Kev for everything before reminding the rest of us that "I went on to play for Everton, Nottingham Forest, Middlesbrough and Watford".