As a teenager there was always a market for blue movies, a dirty video that got passed round your mates. When I was 15, though, the only VHS worth pausing, rewinding 30 seconds and playing again and again was The Only Way is Up - the annual 'best of GTFC' compilation tape.

There were many reasons to love these tapes - the poor quality and slipshod editing being one - but for me it was always about the commentary. So bad it was good. They spoke from the heart, mixed their metaphors and made up new clichés, but they were pure Town. 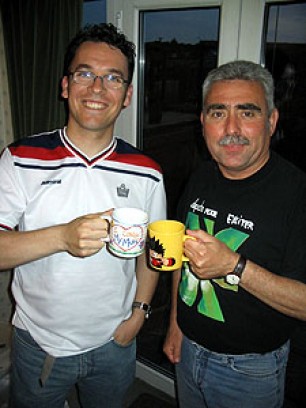 The main commentator was John Moore, and it was with some excitement that I entered the secret location (John's house) for the third Tea With Thundercliffe. Dressed in Depeche Mode T-shirt ("I'm not a fan as such"), John is on top form as he answers the first question - how long a Town fan? - with his first word.

"Crikey! About 40 years. My first game was Workington at home - Dave Worthington was an orthodox right winger and I was stood in the Osmond. Over the years I have been a bit of a nomad: season ticket holder in the Main Stand, had a pop about in the Pontoon before ending up on the gantry. I don't think there's anywhere else to go now."

Ah yes, the gantry. John's been up there 20 years, but he doesn't take the credit for starting the adventure. "Roly Godfrey and a buddy of his got the ball rolling. We used to haunt the middle bar of the Hainton Inn. Roly was landlord, loud, brash and small, great character. We were invited to go along. First game was Wolves at home, 5-1.

"Roly was instrumental in setting it up. It's a shame to lose him; Roly's work commits him to other things. We have had our verbals with him, but if it wasn't for Roly we wouldn't be doing what we are doing now. He was a big influence around the club, got to know the players, helped us to get interviews. He'll never be far away."

Back in the mid-eighties the technology wasn't brilliant - "Batteries were the size of a small house!" - and the amateurish videos that videos resulted were shared among a select few. Now, though, everyone wants a piece of the (match) action; it's a Football League requirement. "The club gets a tape, the opposition gets a tape, the referee gets a tape and the league gets a tape. It's an obligation for each club to provide a tape of each game."

But what about the people who actually buy the things? "We are very grateful to the people that buy the videos - we might earn a bit when we have a good season. We know they are Town fans. And they might lend them to somebody to copy - crikey, we have all done that! - but there are people out there who want their own copy. There's a guy in Derby who has a copy of all the videos."

Derby guy must be pretty versed in all things John Moore. If you've ever watched a vid you must have heard his catchphrases: "Chance on!" Is John aware of these sayings? "Someone told me that was overused, and I quite wholeheartedly agree. It was never planned. Sometimes you twig halfway through a game - 'He's put too much pace on the ball' - I've said it already. 'Chance on!' is not a catchphrase as such, just poor presentation and preparation on my part. I can ramble, do what I do, enjoy it regardless. Can I make it sound any different? Being a natural fan, my emotion will come out. I am never deadpan, and nor should it be."

This is true and has made for some classic moments on these videos. In the early ones, John and Roly used to dissect the season month by month using just their memories and a Sports Telegraph as an introduction to the action.

"The month-by-month stuff was done in the very early hours at Roly's pub. We did that a few times and we thought it was a good idea. This season's tape is three hours - we include everything, warts and all - and we came to a point when one season's tape was over four hours, when editing equipment was not what it is now. The question we asked ourselves was, do people want it? People just want the goals.

"It was great with Roly. We are just ordinary people, ordinary fans. Roly dropped aitches at the drop of a hat - people didn't mind the diction; it added to the videos. Now we are very grateful to have Dave Boylen. There aren't many who can tell him about football. He's very astute. He usually helps at one in three games. He sees it from a pro's point of view."

Any big mistakes 'on air'? "I've never been bleeped, but I'm sure I've called people a silly bugger or a soft sod. I was always worried about commentating on Kenny Lunt."

The boys have been to many away games, citing Liverpool as one of the best - "they fed and watered us" - and Oxford as one of the worst. John and the team - Martin Wilson ("Cameraman - he's Town crackers!"), Pete Wilson and Graham Shearsmith - don't get paid as such, but do get a 'cut' of the profits at the end of the season. Not expecting much this year then?

"It's obviously fresh in the mind, but I don't think I've seen such poor football as what's been dished out this season. It was disappointing. Where we are, it's a great view; we can see when we are making teams chase a game, and I said, for example, that it's only a matter of time before Wrexham score.

"I committed myself to work so didn't make the Tranmere game. It's a long way to come back if you have lost, even longer way to come back if you have lost and been relegated. I listened on the radio. The fans all said: 'It wasn't this game that did it.' Four seasons ago we got out of jail, players like Allen and Boulding saved ourselves, then we suffered relegations. The writing had been on the wall for a long, long time. That's not trying to be clever. Anybody can see, and this is why I am so disappointed with the board. You can see it coming. It is happening in front of you.

"I was angry because you could see what was happening and I was upset because nobody tried to stop it. This last season hurt as much as anything. Why don't we stop this, why don't we stop these ridiculous loan players? No heart on their sleeve. I understand that we are keeping our head above water, but the price is two relegations. Surely we have got to balance the act better than that."

John is very passionate about this and when I ask for his thoughts on Russell Slade he lets out a noise that if you tries to spell it would look a bit like this: "Eurruggghhh."

"I have to say that I am against the appointment. I don't know the man, but his track record is not good and that's not meant to sound disrespectful. If ever there was an occasion to bring in an established old head of a manager then this was it. After being relegated twice - and let's get this absolutely right; we are one step away from going out of the League, let alone out of business - we needed someone like Jim Smith: 'I'm the boss, this is how we do things.' I don't get it.

"I hope in a year's time I am absolutely wrong and he has got us promotion. It's almost like he was appointed on the back of a cup game against Chelsea last season. The situation we are in needs more than that. Somebody needs to get the club by the scruff of the neck and sort us out. It makes you wonder who the other 47 candidates were."

But 16 years ago, with a similar scenario of successive relegations, no players under contract, couldn't the same have been said about Alan Buckley?

"I thought it was the right decision. I used to study me football a lot more than I do now; I'm more of a casual observer these days. He worked at Walsall, and that team was a tremendously good one. I remember him as a player, shock of blond hair. Rather have him playing for you than against you. Rather have him managing us then managing the opposition. He had a good track record, and at Kettering had a really good track record. Knew he could do a good job, but didn't think he could do as good a job as he did. We were difficult to get the ball off. It's like chalk and cheese now."

John has been on the video for almost 20 years, but are there any earlier games he wishes he had commentated on? "Crikey! We're going back a bit to the days of Brace and Tees. A game against Southampton at home, drew 0-0. It was a real good scrap of football. A good tough game. I think I remember it because I drank a bottle of whisky. Then there were the Wolves games, replays in the cup. A cracking game of football. I would have liked to work on the cup games, the one-off games. We always gave a good account of ourselves."

John is such a likeable man that our interview breezes by. To try and understand what makes him tick, I ask about his hobbies.

"I like me cricket. Twenty years a member. I just like the occasion. I've seen players like Viv Richards; it's a privilege. And I've got 40 pints in the other room - I make my own beer."

To relax? "I enjoy films - Doctor Zhivago, Night of the Hunter. Silence of the Lambs - plus I am an avid music fan. Bands such as The Who, Springsteen, Beatles. Oasis are never less than interesting. Ash are good, although I've not got any of their music."

John's got a story about most things, and even the stock CA question about the order of ceremonies when making a cup of tea meets with a tale. "The girls at work are always complaining when I make a cuppa. 'It's got scum on it,' they moan. To which I reply, stir it up, stir the scum in, get a tissue on it, scoop it out. But it's tea bag in first, water then milk. Evidently this is a big mistake."

John cites his claim to fame as once making somebody drop a cup of tea by sneezing. "I've always had quite a good sneeze."

And that's it. John Moore the video genius. Whether or not he's more polished these days, the videos are still worth watching. Why did he ever think he could be a commentator in the first place?

"I have never been a big fan of Motson or Moore. Watching football on TV, I turn the commentary down and listen to music. It's got to be pretty simple if I can do it. I enjoy it and I'm a supporter of GTFC anyway.

"It's a home-grown concept. People never say: 'You clever sod, you should do better.' People always have something nice to say, which is touching."