I pity those diehard fans that did the 600-mile round trip in one day. To get up, drive all of that way, see the utter dross and then drive straight back takes stamina, bravery and a little madness. Much better to use the game as an excuse to meet up with some old friends and former colleagues and get pissed. Which we did.

Following a Friday completing the Mumbles Mile (ten pubs, ten pints; or in our case, ten pubs, ten pints, four shorts and some unique concoctions involving Tom the landlord) in the rain, we woke to brilliant Welsh sunshine. Brighton fan Rowly prepared one of his famous breakfasts and we were ready for the off.

Away games always have that certain feeling: strange place, new surroundings, new pubs to visit. Sampling the brews in the Potters Wheel before the match, we discussed the chances for the Mariners. Dave (born in Wales, West Brom fan), Clarky (Scottish, no fixed club), Alan (Fulham), Jensen (Australian) and Rowly listened intently to me and fellow Mariner Christian as we tried to instil some excitement. Three pints later and they were fully conversant with Russell Slade's 'tactics' and our profligacy in front of goal.

Walking to the ground, the absence of fellow Mariners was all too evident. Everywhere outside the tight ground was Welsh, the air thick with high inflection at the end of sentences. Eleven quid gained entrance for the standing area behind the goal and a quick toilet break was had. Well, I say 'toilet'; it had three walls and a plughole. No basin or anywhere to have a dump. You could quite literally piss anywhere and it wouldn't matter.

Vetch Field is a quirky ground. To our immediate left were standing Swansea fans and then a whole stand running the length of the pitch, a bit like the old Barrett Stand. Opposite: half a stand. It was almost like the builders had given up halfway through.

About 140 Mariners watched as the game kicked off, including a bloke in full climbing gear. Well, Wales is a bit hilly, I suppose. The early exchanges were brisk on the pitch but brisker in the stand as a group of Townites spotted a Swan with a handlebar 'tache. "Gay in the village! The only gay in the village!", sung to the tune of 'Sing When We're Fishing'. No retort from Dafydd as Crowe had a shot tipped over. 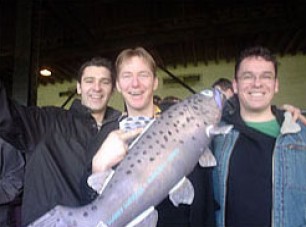 Town were playing a 5-3-2 formation, seemingly intent on hitting the channel and hoping something would happen. Hockless sort of floated around Fleming and Stacey, while Bull seemed intent on taking out whoever got in his way. As our attention shifted on the terrace, Aussie Jense asked without irony: "Why has that man got an inflatable fish?" It was a fair question.

Towards the end of the half, Town had three chances to take the lead within 30 seconds, Gritton, Reddy and Somebody Else all having very good chances saved and blocked. Story of the season.

The half ended goalless, with Town much the better side. Swansea were physical but failed to really penetrate. Trundle showed good touches but was unable to con the referee into awarding a penalty.

Half time involved queuing at a metal hole for food, almost like some kind of druggie waiting for their fix. Unfortunately, the only thing forthcoming was a £2.80 hotdog, so any highs were going to be found on the pitch.

The second half was a bigger non-event than the first. As my mates tried to comprehend how I had talked them into parting with £11 and two hours of their life, 'Daffyd' took centre stage. Our 'boys' came up with "Third in the league? You're having a laugh!", which I had to agree with, as they had yet to muster a real effort on goal.

The Only Gay, who had a voice somewhere between Harry Secombe and Barry White (Barry Secombe?), retorted: "Bottom half? It's where you belong." To the same tune. You couldn't argue with him as first Reddy and then Gritton failed to take more one-on-one chances.

The Swansea fans were becoming increasingly frustrated at their team being second best to 'lowly' Grimsby - I say second best, but that's not to say Town were 'best' as such. [Well, no; there were only two teams, so we need not the superlative form of the adjective but the comparative, which is 'better' - smug Ed.] Even Lee Thorpe couldn't score against his former club. 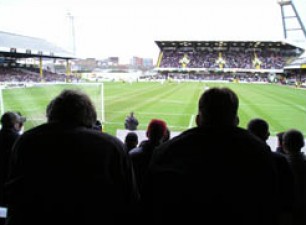 As the game petered out into nothing and we became colder than an eskimo's fridge in winter, I was thankful that my weekend had been built around something more substantial than this goalless draw. As the whistle finally went and the players hugged each other in celebration, or maybe just to keep warm, the remains of a season were there before us.

As the ground emptied onto streets with blue, turquoise and green houses ready for a night out in Swansea (buy one get one free on any drink all night), we contemplated the previous two hours of our lives.

This was a game that Town should have won, against 'high-flying' opposition who were made to look ordinary. If only we could play with purpose and some discernible tactics, as well as take our chances, this division would be ours. That we don't and can't means we are in the bottom half. Where we belong.