In a nutshell
Ebbsfleet are the club that went from 50,000 to 9,000 followers in the space of a season. A little harsh perhaps, but allow me to explain...

History
Way back in the dusts of time there existed two clubs: Gravesend United and Northfleet United. Both had been around for a good half-century before, just after the Second World War, they merged into a single entity: Gravesend & Northfleet. They jollied about the Southern League for some time. They briefly spent some time in the top tier of non-League, becoming founder members of what is now the Conference Premier. They hung around a bit more, lower down, until promotion back to the top level in 2001-02. Here is where things get a bit complicated.

Life in the top tier of non-League was fine. Unspectacular. But fine. Then in early 2007 they were approached for sponsorship by Eurostar, which was on the verge of opening Ebbsfleet International station as part of the high-speed rail link with Europe. With a desire to get the name 'Ebbsfleet' used a bit more by the general public, the sponsorship deal came with the proviso that the club rename itself. Thus, Ebbsfleet United was born. But that was only the beginning.

Early 2007 and a 'revolutionary' idea for football club ownership was offered with the launching of the My Football Club (MyFC) website. The idea was that fans from around the world would contribute financially to a club through a yearly subscription. In return they'd get a say, or vote, on signings, team line-ups, ground improvements and many other things connected with the club. Over 50,000 subscriptions would be needed to buy a club.

In the votes on which club to take over, Leeds, Cambridge United and Forest came out top. But at the point when the magic 50,000 was reached, and the capital became available, the project identified a more realistic target. In November 2007 MyFC made an official approach to Ebbsfleet United, who had been one of nine clubs to show an interest in being part of its 'revolution'. Following due diligence, MyFC members voted overwhelmingly in favour of the takeover. But with only 18,000 of the membership even bothering to vote, perhaps some alarm bells were already starting to ring.

Early on things didn't quite go to plan. The idea that the subscribers would decide on the team line-up immediately caused problems. Most hadn't been within 100 miles of the club and wouldn't recognise a single Ebbsfleet player. How could someone who'd paid such little attention to the club decide who should play? The idea was soon dropped when people realised that the manager, Liam Daish, was in a better position to judge players' performances (after all, he saw the players in both training and games). As such, although subscribers did get a vote on the sale of some players, most of their interaction with the club was more concerned with catering and other general day-to-day administration than the playing side. In reality the dream was less Football Manager and more like crap 90s PC game Ultimate Soccer Manager where you spend more time setting the price of pies and burgers than actually picking the team. 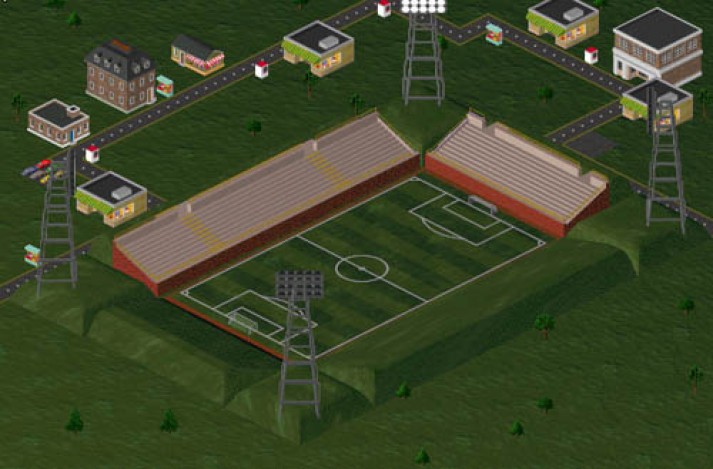 Now – where shall I put that new hotdog stand?

Interest quickly waned among the majority of subscribers, with most issues put to the membership during the initial season struggling to attract more than 7,000 votes. At the time of renewal, only 9,000 bothered to continue their involvement with the club. In subsequent years this dropped to 3,500 and later to just over 1,300 subscribers.

During that time there had been a measure of success. The club had finished in a healthy position in the Conference for 2007-08 and 2008-09 and they won the FA Trophy, defeating Torquay 1-0 in the 2008 final. However, with the continued drop in membership came a drop in funding. In 2010, with one of the smallest budgets in the Conference Premier, they were relegated. Even then, there were only a few points between staying up and going down.

While it's easy to mock the armchair fans who bought into the whole MyFC concept and gave up at the first sign of trouble, there are still a good number (around 1,300) who continue to renew their subscription. You get the feeling that these are people who have since developed an affinity with the club – the disenfranchised Premier fans who've found a new club to cherish – and it's hard to find fault with that as long as they continue to support the club. And with subscription now at £60 a year – or rather, the cost of buying a home and away shirt at most League clubs – you'd need a strong bond with the club to continue to subscribe. That said, the last major vote – to decide on whether to give the final decision on player signings back to the manager – attracted only 130-odd votes. A majority voted against the proposal.

For more detail on the issues facing the club, you should read this piece by the excellent Two Footed Tackle blog.

Last season
One of the good things that the MyFC subscribers have done differently to a lot of chairmen (yeah, I'm looking at you, Fenty) is to stick by the manager. Liam Daish has been at the club since 2005 and it's this stability that helped United survive.

After relegation the club had only a few players under contract. With funds quickly disappearing, fans feared they would spiral to a further relegation or slip out of existence. Reverting to part-time status to helped cut costs quickly, and luckily they weren't over-burdened with players on long, expensive contracts to pay up (yeah, I'm still looking at you, Fenty).

With nothing really expected of them, Daish quickly put together a decent squad which then lost only one match between the end of August and the beginning of January – and that being to Wimbledon in the FA Cup (even then, Wimbledon needed a replay).

In Liam Daish, Ebbsfleet have a manager familiar with the club and the Conference. Photo by Steve Fair (cc by 2.0)

They finished the campaign with decent home form, but outstanding away form – losing only three matches on their travels all season. Alas, it wasn't quite enough for automatic promotion with Baintree storming the league, but they made short work of Chelmsford in the play-off semi-final. Things looked even easier in the final: 3-0 up against Farnborough with four minutes to go and they were coasting. However, Farnborough nicked a couple back and almost scored a third before Ebbsfleet got another of their own to finally kill the match off.

Nobody expected them to bounce straight back and it's a credit to the management skills of Liam Daish that they did. It also helped to alleviate some of the ongoing financial difficulties that continued as a result of a loss in subscribers.

Next season
The club has already made one decision in its favour for next season: they will live within their means and remain part-time. This does give them a slight advantage: they can't compete for players with the larger teams in the Conference, but by staying part-time they are pulling players from a different pool to most in this league. And with their proximity to London they're an attractive option for decent non-League players who want to remain part-time.

It's always going to be a struggle for the small part-time teams in the increasingly professional Conference Premier, but in Daish they have quite a canny manager. Don't expect them to be troubling the play-offs, but at the same time don't be surprised if they turn over a few of the ex-League teams.

Statistics
Betting: At 80-1 they're not expected to do much, but interestingly they are on shorter odds than Braintree, who stormed the Conference South.

Apart from the football
Well, you can always catch a high-speed train to France and then from there... who knows?