Well hello there, Wimbledon. Let's talk about you.
Loved by all right-thinking Football League supporters, inevitably resented a bit in the leagues they've stomped through to reach the Conference, AFC Wimbledon are a glorious lesson in the art of the possible. A new supporter-owned club to replace the one stolen by Milton Keynes was "not in the wider interests of football," said an FA committee back in 2002. "Sod that," said the fans. English football as a whole would surely be in far ruder health if the blazers at Lancaster Gate had a fraction of the self-belief and sheer gumption that have since driven on this club to four promotions in seven seasons. 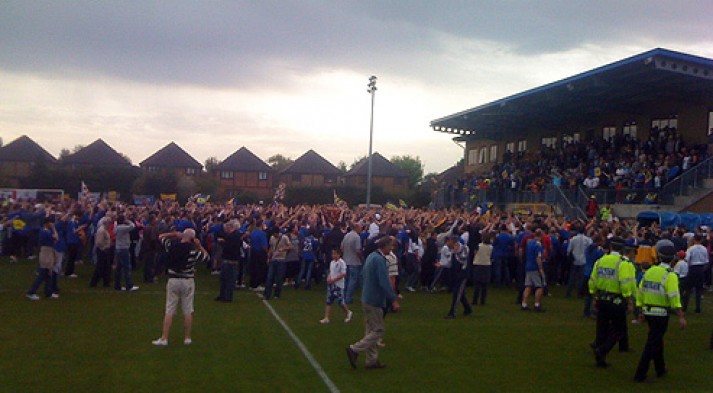 Here at Cod Almighty we have some positive personal experience to report. The day before Town played Bastard Franchise Scum in the 2008 Dulux Cup final, three of the CA team (plus my missus) went along to Kingsmeadow. We paraded a Harry the Haddock around the club bar, nattered to some lovely, friendly Womble types, and basically got tret like royalty all day. I guess we were bound to go down well, y'know, taking a stand against franchise football and everything, but still. It was bloody great.

Sure, it might be worth debating the purchase of the stadium from Kingstonian. And there's bound to be some contingent in the fanbase whose feet have outgrown their footwear. But as well as providing a model for supporter ownership that's already inspired several other phoenix clubs, Wimbledon run an exemplary community set-up, with an extensive youth system giving opportunities to kids right down to under-9 level. You'd need to track down the members of that FA committee to find out exactly which part of this is "not in the wider interests of football". Because from where we're standing this looks like a club that embodies everything good about the game.

Do you come here often?
2010-11 will be the Dons' second season in this division after back-to-back promotions from the Isthmian Premier and Conference South. Looking back a little further, Wimbledon FC's last spell at this level began with promotion to the Southern League premier division in 1965 and ended triumphantly in the heyday of punk. After winning the league three times on the trot, the club was elected to the Football League in 1977, replacing a pretty vacant Workington.

Most fans will see a return to the League as cosmically inevitable at some point, but it's all still wide eyes and am-I-dreaming giddiness around here, so nobody's going to get all arsey if it doesn't happen next season.

Haven't I seen you somewhere before?
One or two big scores here. Town's 6-3 win at Wimbledon in our 1979-80 third division championship campaign will still elicit a fond sniffle from Mariners of a certain vintage (ahem). Fresher in the memory of younger Grimbarians will be the 6-2 romp at Blundell Park during the storming run to second division safety under Paul Groves in 2002. Hat-trick from Alan Pouton, hat-trick from Michael Boulding, mm, remarkable, wasn't it. Bradley Allen for goalposts.

Most famously of all, of course, Plough Lane was the setting for a seminal moment early in the Buckley years – during Wimbledon's own spell in the top-flight limelight. It was 1989 and the fifth round of the FA Cup, attended by 5,000 Dons fans, 7,000 Town fans and at least as many Harry the Haddocks (NB: these figures may be invented). Wimbledon – who, fabulously, had won the trophy the year before, beating Liverpool in the final – had to come back from behind for their 3-1 win after Keith Alexander's early header had given Town the lead. Good times for both clubs, even three divisions apart.

What can we do when the sun goes down?
Well, there's a migraine-inducing 'family' break just a little further out into Surrey, at Chessington World of Adventures – which, in fairness, now includes a great petting zoo and a sealife centre, apparently. See the deer in Richmond Park, lose yourself at Hampton Court or, keeping with the love thing, take in the Lawn Tennis Association Museum. Personally I'd sample some east Asian cuisine at one of the many cafés and restaurants in New Malden, home to Europe's largest community of expat South Koreans. And then work off the calories with a brisk stroll around Wimbledon Common. Making good use of the things that we find, as the motto of AFC Wimbledon might have had it, but doesn't.

Do say
"Would you like to see my inflatable fish?"

Don't say
"Get up to Milton Keynes much?"

Do you know the Wimbledon area? We want your recommendations for local pubs, cafés or B&Bs, to feature in our pre-match factfiles during next season. Use the Cod Almighty feedback form to send them in – or to share any other thoughts you might have about our Rough Guide to the Conference.