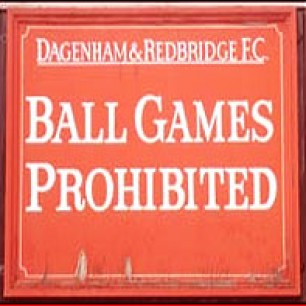 In a nutshell
Ah, a new season, a new rough guide. Is this the Daggers I see before me? Indeed it is. The Daggers: in some people's minds a false creation, having been formed only in 1992 – but more of that later. They are the victims of murder most foul and their name will forever be associated with Boston United, that busted flush of lower-league football. Who says crime doesn't pay? It cost the Daggers a further five years in non-League.

Born in 1881 as Ilford FC, when Dagenham was just a tiny little village famed for its morris dancing, a century later the hand of history was round their throat and we had the merger years of 1979, 1988 and 1992. Ye olde Dagenham FC, Redbridge Forest, Walthamstow Avenue, Ilford and Leytonstone are now a blancmange calledDagenham & Redbridge. They're due another rebranding any day soon. Stand by for East End United with their club crest featuring pie over mash. And they have a new club song. Remember we made it up here, folks.

With jellied eel wingers and salt-of-the-Earth defenders with hearts of gold who love their mums, the Dags are finally where they should be. No stereotypes here, oh no.

Goodwill hunting
They hate Boston more than you could know, o-ho-o, know-oh-ho. They may be Cockernees but they're the innocent victims of the most heinous of English soccer crimes, cheated of promotion to the Football League by those fenland fraudsters in 2003. It wasn't as though Bust'un's loose approach to ethics and legality were not known – it was all common knowledge in the Conference that year: the boot money, the enormous inducements and the threats. They hated Evans way before the revelations, for they'd met Mascara Man. To know-oh-oh him is to loath, loath, loath him. And they do. Yes they do.

And don't mention Jim Rodwell. Chairman of Bust'un now, but in 2002 a player at Rushden & Diamonds. Loaned to the Dags, a fee was agreed and his transfer set; all that was needed was a signature at the end of his loan. Then the Irthlings recalled him for an injury crisis and sold him the next day. On a free transfer to Boston. Boston went up on goal difference, remember.

Now tell me you have any feelings of ill-will towards them. They enter the league with universal undislike and a smattering of immense goodwill from the sentient.

Oh, and they dislike Hornchurch too, another of these non-League clubs that are playthings for the suspiciously wealthy. The Dags really haven't been lucky, have they.

Previously on Twin Peaks
Of course everyone was happy about last season, as it went rather well, generally. The present manager, John Still, was their first manager, which at least adds some symmetry and romance to their rise. His return bucked them up after a few years of mumbling and bumbling, and we'd better watch out as they scored gazillions of goals on their way to 95 points. They won the division by 14 points, and that after selling their top two players toPeterborough in January. They received £250,000 for Mackail-Smith and Blackett. Let's put that in perspective: the highest transfer fee they've paid is £15,000, in 1998.

They aren't a moneybags team: they're a proper fans' club, for they were legally a members' club run by a committee until 5 April 2007. Football League rules state that to join the 'big boys' a club must be incorporated. So they've had to become just like everyone else. Beware, chirpy cheepy cockernees, men who promise you the Earth and/or wear make-up.

Ins and outs
In, out, in, out, who was shaken all about by their shuffle up the pyramid? Well, they let Paul Bruce and Tim Cole go and have brought in a Canadian called Ross Smith (from Ebbsfleet), Richard Graham (Barnet), the gloriously named Shane Huke (Peterborough), the fabulously tongue-twisting Magnus Okuonghae (from a pre-Evans Crawley) and, in case of injury, they've just signed a Nurse from Stevenage. Let's hope he's not a night nurse on a cold January evening in Grimsby. Gertcha!

Ah, those we have loved and lost. James Lawson – remember his 22 minutes of infamy last autumn? The boy who missed the seaside and had to go back to his mum in Sarfend. Yes, that's him. He rumbled into Dagenham months later on loan. He was sent back of course. Failed for both of us, we have so much in common. Err, Jimmy Jimmy shouldn't have been signed.

They aren't devoid of recognisable players and unpronounceable names. We'll have to wait to see if they have unbelievable hair lurking in the avenues and alleyways. There's Tony Roberts – no, not Woody Allen's mate from Annie Hall – the former QPR and Millwall (and Wales once) keeper. He retired from the professional game because a surgeon told him he'd lose a finger if he kept playing. He still has his fingers and he's still playing, or at least until his testimonial v West Ham, whose official website states: "West Ham United supporters will be segregated for this match". Oh no, not thatkind of segregation – they're sound, nothing to do with Ford airbrushing the unwhite employees from advertisements. Do you remember that? Do they remember Ford. The town exists because of the Ford Cortina. And now it's a bunch of shoe shops.

Oh yes, their players. I can't wait for the tannoy announcer to have a dash at Bai Mas Lettejallow. Would that be with or without parmesan? And don't forget to donate 25p to the Venice sinking fund every time Paul Bolland tackles Paolo Vernazza.

Good vibrations
They're still bouncing and are just happy to be around. This happy June day they are still getting their tan from standing in the English rain, without a care in the world, except for the dearth of season ticket details. It's all about being, no time for worry about the future. Let them be, let them have their moment. The winter is a time for caution and caustic comment. Catchin' a pike and ridin' a bike on wooden wheels and a bowl of eels. Yes... that's what they like.

Spotters' guide
Dagenham, I see thee yet, in form as palpable as this which now I draw. You know nothing about Dagenham? Let's start at the very beginning; it's a very good place to start. Sing after me...

Dagenham was first mentioned in a charter of Barking Abbey dating from AD 687. The first Dagenham was almost certainly just a small farmstead, the ham or farm of a man called Daecca. For over 500 years after this the settlement was evidently too small to be mentioned in records (on the Daecca label, no doubt). But then, in 1931, little old Dagenham village became Ford Town.

So when grown men speak of Dagenham they think of the beautiful curves of the Ford Cortina. Is that all? Is it the Belgium of London? Can we name ten famous Dagenhamians? The first five rows of the Dagenham Girl Pipers don't count. Shoeless Sandie Shaw; Sir Alf Sir Ramsey; sixties prettyboy popster Heinz; one of the biggest winkers in English football Mr Terry Venables; snooka loopy Barry Hearn; cuddly Dudley Moore; Daniel Corbett the Twinkle Dust weatherman; Alf Wakeling, one of the founder members of the Gild of Brightlingsea Freemen; Tim Cahill's dad; Dagenham Dave, immortalised by the Stranglers. There you are, ten famous Dagenhamians! Strike a light, cor blimey guv, leave it out! Dagenham Dave was from Manchester. That's nine then.

Ah, how could I forget Councillor Fred Tibble, my tenth man, who recalled: "Many people in Dagenham played quoits." Yes Fred, fascinating, but what's that go to do with footy-wooty? Ah, this is better: "Children would climb up the slaughter-house wall to take a look at cattle being pole-axed. They also hoped to acquire a pig's bladder to play football with." The good old days.

The fictional borough of Walford would be nearby, if it existed. And the Dags once lost 9-0 at home, live and exclusive on Sky. Even we've never done that. Yet. Bored of football, then wander into their version of McMenemy's. Dagenham's facilities are regularly used by such diverse groups as the Normandy Veterans Association, a dance school and bereavement seminars run by the club's main sponsor, which is a local funeral director. They'll feel at home wandering around the cemetery end at Bury then.

But this has all been about Dagenham. What about Redbridge? It's just a vague area of London, a bureaucrat's fancy one spring afternoon, with pen poised arbitrarily over a map, much like Upper Volta in the days of slaughterhouse quoits down old Dagenham way. They are the poor, downtrodden, huddled masses of London. They are the Grimsby of Cockerneeland – out on a limb, forgotten, hidden away, overlooked and unwanted.