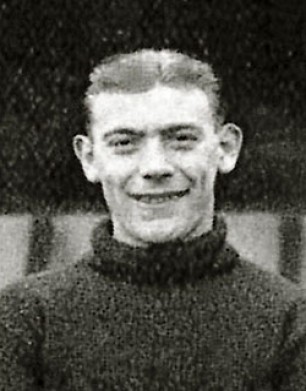 From George Tweedy to James McKeown, Grimsby Town have nourished the fans with goalkeepers who have delighted us, frustrated us and at times left us in despair. Over 65 seasons we have had a mélange of the good, the bad and the mediocre.

I have enjoyed following the progress of the many keepers who have played for the Mariners since World War Two, travelling through the wilderness of the sixties and seventies when we had a spell of 17 seasons outside the then second division, right up to the dog days of the past 10 seasons. These are my recollections.

The first keeper I saw donning either the red or the blue jersey of GTFC was the balding Tweedy (pictured), a pre-war England international, who was a talented keeper, commanding at crosses and a super shot stopper with a prodigious kick. He finished playing in the 1952-53 season after making more comebacks than Alan Buckley.

The short, unhappy career of George Moulson
Tweedy unwittingly played a part in Town folklore in the first season after the war. He was injured in a match we won at Brentford 1-0 and replaced for the following game by George Moulson. This was the oft-recalled Good Friday game against the Stoke City side that, minus Stanley Matthews, attracted 26,537 spectators – then a record crowd for a league game.

Moulson had a shocker as we lost 5-2 in his only league game with the Mariners. His unhappy career with Grimsby Town ended that day, his only previous outing being the FA Cup semi-final against Wolves in 1939, when an injury forced him off early in the game. Again, this had been in front of a record crowd, but this time at Old Trafford.

While the Stoke game has a place in the annals of Grimsby footy, the subsequent Easter Saturday game with Blackburn Rovers is rarely mentioned. That was the day the diminutive Wilf Chisholm made his Town debut. Thus we played three different keepers in three successive matches over eight days.

Wilf Chisholm – a red jersey and yellow gloves
The five-foot-eight Wilf was yet another player off the north-east conveyor belt, born in Hebburn. The boyish debutant was given every encouragement by the Town spectators as, modelling a then traditional Grimsby Town keeper's red jersey and his stylish yellow gloves, he took his place for the pre-match shoot-in at the Osmond end to a warm reception.

One of his saves during the warm-up, a tip over the bar from a hard shot that would have dipped into the net, was rapturously applauded by the Blundell Park faithful. The tribulations of the previous day began to disappear and Chisholm did well as we won 2-1. Wilf also played in the reverse fixture at Stoke. Town lost 3-0 and with Tweedy back in the fold Chisholm's chances were limited to a handful of games.

Town were super confident they could make a quick return to the top flight in 1948-49. This did not happen

Tweedy played for most of Town's last ever season in Division One, including our final home game against Charlton. Their goalie, the auburn-haired Sam Bartram – a pre-war rival of Tweedy's, labelled the greatest keeper never to play for England – gave a memorable display.

The following game at Arsenal may well have been written off as one best forgotten. Not the case, however, even with George ignominiously having to pick the ball out of the Town net on eight occasions. Our headteacher had travelled to London to watch Town bow out of the top flight. After I received a call to her office and a reprimand for trying to take over cricket coaching, she then spoke of her trip to Highbury and the brilliance of the title-winning Arsenal side. Although leading scorer Ronnie Rooke notched four goals, it was her admiration of the deft skills of cricketing legend and Brylcream boy Denis Compton that made the lasting impression.

Before a shot was taken in anger, Town were super confident they could make a quick return to the top flight in 1948-49. This did not happen. George Tweedy was struggling with minor injuries and a consequent loss of form and it was perhaps a happy release when, after a 6-3 loss at Leeds United, he made way for Chisholm. Chisholm went on to have his best season for the Mariners, enjoying an unbroken spell of 27 matches with Tom Galley, Ernie Forrest and Duncan McMillan giving experienced protection.

The '49-50 campaign was the Tommy Briggs season of 36 league goals and an England B cap. Town were second highest scorers in Division Two, but that probably hid the fact that our goals against were the second highest too. The Bobby Robson adage to "never fall in love with a small keeper" was post-dated by some 35 seasons from the time when Wilf was in the Town net. While brave, quick off his line and capable of spectacular saves, he was, despite his athleticism, inevitably vulnerable to high crosses.

Barney Bircham – dropped after a clean sheet
Chisholm did give way that season, to Barney Bircham, who had a spell of eight games without making the position of keeper his own. He made one brilliant save, moving to his left, tipping the ball over the bar while parallel with the ground – I think against Southampton and most certainly at the Pontoon end. His final game for Town was a 2-0 home win against West Ham. Bowing out after a clean sheet is unusual and surely even more so in those days of a colander-like defence, particularly after having kept his place after conceding seven at Barnsley and five in the cup at first division Portsmouth.

It was the last game bar one for Chisholm, his confidence shattered in front of an appalling defence

Chisholm was reinstated, save for one match when George Tweedy returned to make what many thought would be his farewell appearance. It was against Brentford and on FA Cup final day. By now the final was televised, and even then gates suffered when games were on telly. This decision to play Tweedy was indeed a thankyou but, some felt, was taken more cynically as a way to maintain the attendance. The scheme worked well as the gate reached over 12,000 when fewer than five figures would have been expected under normal circumstances.

Chisholm's last chance
Back came Chisholm but a year later he lost his place again. A game against Leicester City on an infamous Christmas Day turned out to be the last Town game for eight seasons for Coventry-bound Tommy Briggs. It was also the last game bar one for Chisholm, his confidence shattered in front of an appalling defence.

For two matches, Town played George Turnbull in goal, an average keeper in every sense. Quite capable at Midland League level, this ex-guardsman was pictured in the Daily Mail as he dropped a cross in a 4-2 cup replay defeat at third-flight Exeter City. Just not good enough, but Chisholm fluffed his last chance as we lost 2-3 at Notts County. It was downhill all the way after that for Chisholm. Sadly, my last memory of him was of the ball squirming under his body on a gooey Blundell Park in a 5-4 home defeat inflicted on the reserves by non-League Peterborough United.

Town had no alternative but to sign a keeper of some quality, and interim manager Tweedy plumped for Stan Hayhurst from Barrow. He bravely stepped in to try and staunch the flow of goals but, after losing 4-0 to Everton at Blundell Park on his Town debut, he must have wondered if the cross-country journey was worthwhile. Two goalkeepers would not have staved off relegation that season. Town started their first season back in Division Three (North) since 1926 with Stan Hayhurst, the tried and tested George Tweedy and a then very young Tom Daley all on the payroll, but only Hayhurst confident of a regular first team slot.

Suffice to add that without a good keeper a side has to be very lucky to survive. Grimsby have been guiltier than most of neglecting to pay a fair price for the practitioners of the noble art of goalkeeping – and haven't we paid dearly for that omission.