Book review: It's Not All Black and White 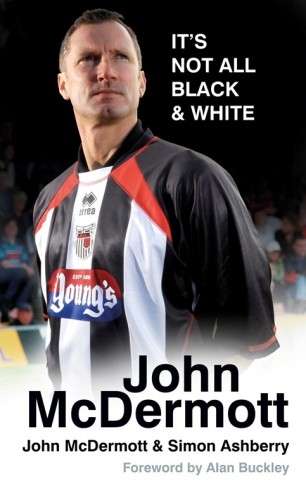 In contrast to other autobiographies by former Grimsby players, John McDermott's recent release is 90 per cent based upon his time at the club. No searching for the brief Grimsby bits here. It's Not All Black and White is actually nearly all black and white, with Macca's school days and management career the two thin slices of bread of a mighty Mariner-filled sandwich.

I was lucky enough to see both John's debut at Bradford in 1987 and his final emotional farewell at Gay Meadow in 2007. Many Town fans will also have many personal memories of John and the games in those 20 years, the incidents and personalities described in the book will resonate throughout the read.

The book follows a pretty traditional route in telling the McDermott story, with each chapter taking us the next step on the chronology of John's career. It starts in a poor part of Middlesbrough with a small lad with something to prove and shirts far too big for him. His mate Steve Livingstone had impressed the scouts and secured a move to Coventry, but Macca had impressed a club he'd never heard of, let alone knew where it was. He hadn't realised that he'd have to stay over on his trial period: he just thought he'd be able to get the bus home every night.

The trial went well and Macca was invited back as a youth trainee. Town scout Jimmy Mann is the man credited with spotting the player and launching the illustrious playing career of a Town legend.

Macca played right midfield in those days and was only later converted to full-back under Alan Buckley. He impressed as a trainee and went quickly into the reserves, achieving his dream of playing in a proper football stadium, even if it was a deserted Blundell Park. Although excelling on the field, off it this was a tough time. Living in freezing cold lodgings in Cleethorpes, 16-year-old Macca was homesick and was also being bullied by fellow YT lads. The nature of the bullying is not dealt with in detail and no names are mentioned, the only clues being references to later encounters as professionals.

It's Not All Black and White moves along with Macca's speedy break into the first team under Mike Lyons. Macca's relationship with each manager during his two-decade career, and his adjustment to their style, is a recurring theme. Mostly the story accords with Town fans' perceptions of each regime. Lyons is the taskmaster with discipline as a priority; Slade the arm-round-the-shoulder people manager; and Law the hapless outsider.

The contract offered to him was worth less than the one he'd rejected a few days earlier. His relationship with the club – and, in particular, John Fenty – never recovered

The two most influential managers on McDermott were not surprisingly Alan Buckley and, maybe a little surprisingly, Lennie Lawrence. Two managers with highly contrasting styles. Buckley is portrayed as the old-fashioned master, joining in with training games. Lawrence had and still has Macca's respect for being ten years ahead of his time for introducing fitness monitoring, diet control, sports science and research on the opposition. Macca credits the ideas brought in by Lawrence crucial to the longevity of his playing career.

John's proposed move to Hull City in 2003 is explained in some detail. The deal fell through right at the last minute. He was waiting in a Hull hotel just to sign the contract when he got a phone call saying they'd gone for a just-released Tottenham player instead. Having to return across the Humber with his tail between his legs, the contract then offered to him by Grimsby was worth less than the one he'd rejected a few days earlier in favour of Hull. His relationship with the club – and, in particular, John Fenty – never recovered.

There's a fair bit of stereotypical footballer stuff. Drunken antics on pre-season trips, mostly involving Tony Gallimore, are described in detail. The prevalent drinking culture comes over constantly. There's very little about life outside of football and hardly anything about family. Pivotal moments in club history? The two 1998 Wembley games are well documented. There are interesting perspectives on events in the dressing rooms at Kenilworth Road in 1996 (it was a sandwich, not a chicken leg) and Prenton Park in 2004 (Nicky Law’s tactical misjudgment). Anybody hoping for an insight into what went on before the Millennium Stadium game, though, will be left wanting.

One of the most poignant references in the whole book is actually in the foreword by Alan Buckley. He relates Macca's long stay at Grimsby to the changing fortunes of the club. As the young player progressed, so did the team. Macca didn't have to move clubs: the club just progressed to the next level. That, says Buckley, is why the club managed to hang on to so talented a player for so long.

Sad that we may never ever again see such a loyal club servant as John McDermott. But also sad that Town's rise to the second tier of English football, which enabled us to keep him, is also unlikely to be repeated.