The making of Pass and Move: part 1 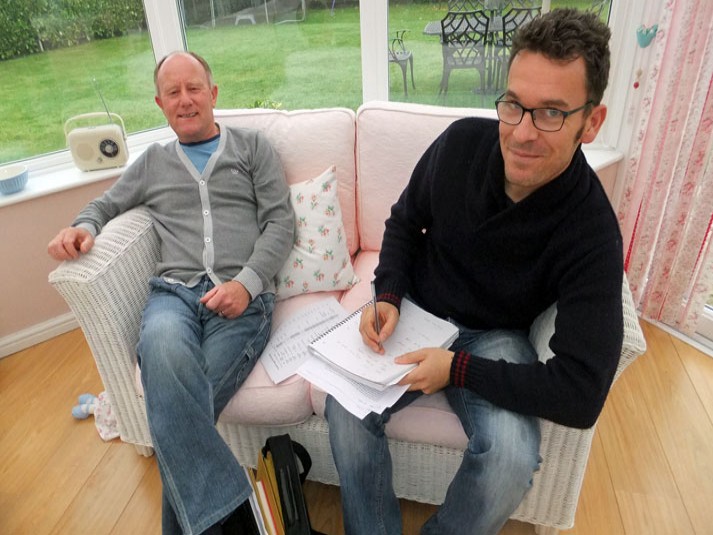 This is a story which started over 20 years ago, December 1993. I was 18, back from Cardiff for my first Christmas as a proper student. In truth I had found it hard, away from friends, family and my beloved Grimsby Town. In a world before instant access to the smallest piece of Town news, mentions on teletext and the odd goal on HTV when playing a Swindon or a Bristol was as good as it got.

I still followed every game and goal and had a voracious appetite for the written word, using my exile to write letters to the Grimsby Telegraph and articles for Sing When We're Fishing. I suppose it was cathartic but that's where my writing about GTFC was: epistles about playing Neil Woods in midfield and a crude top 10 in the fondly remembered fanzine.

So back in town, a little aggressive about the whole thing with growing hair and empty pockets, I was in the Sheaf with Christian, a school friend, telling him how shit Grimsby was, and of the need to "see the world".

As I continued to pontificate, a familiar voice filled the air, a voice I had not heard for three months. Standing near the fruit machine was a moustached man who I recognised from a 1986 Town programme. And the voice. The voice that was instantly recognisable and is now the Voice of the Mariners. I sauntered across in my baggy Top Man jumper and hijacked the conversation. "Are you John Tondeur?"

Iit was a little too stern, but that was me back then. Thinking he would confirm and then carry on with his life, I heard him reply: "Are you Paul Thundercliffe?"

I was lost for words (he had seen me in a Franklin College play and recognised my name from hundreds of inane letters published in the Sports Telegraph). A friendship was born.

Fast forward to January 2012. The student now has a teaching career, a wife, two kids and a still-passionate attachment to the men in black and white. JT is still on the airwaves, and sometimes inviting me to accompany him in the commentary box.

Alongside John for the home game against Bath was a true legend in every sense of the word: Grimsby's greatest ever manager, Alan Buckley. This was momentous for a couple of reasons. One: he had not been heard of since his third spell in charge was cut short in 2008. Two: any Town fan of the 90s would be hard pushed to envisage a warm radio voice from somebody who, despite the success, was never perceived to have consummate 'PR skills'.

My head was swimming. The sum of massive Town fan plus a few Cod Almighty articles didn't really seem to add up to Alan Buckley's autobiography

I don't know what I was expecting but it certainly wasn't the engaging character who came across instantly. Buckley sounded fresh and happy and was eager to answer all sorts of questions. This made for fascinating radio because these were all the snippets that we Town fans had never heard. Who knew that he thought Tony Caldwell was his worst signing and that he called Lee Ashcroft "the Loon"?

The anecdotes were engrossing and I wanted to hear more. I texted John before kick off. "Alan needs to write a book. And I'll write it for him!" Little did I know that that flippant SMS would lead to an incredible two years.

Alan's exposure on the radio had led to something of a renaissance and the Mariners Trust was quick to secure his services for an 'Evening With' event at Blundell Park in April 2012. Christian and I immediately got tickets but there was an added edge to the evening. John had asked Alan if he was interested in writing a book, mentioning me, and Alan was interested. He'd always felt a book was somehow in him – but he didn't feel he could write it.

We were to be introduced at the Mariners Trust event. It is fair to say I was nervous. The book was one thing – and at this stage merely a really vague idea – but meeting Alan was quite another. In my mind it would be a drunken handshake after the event, but there was no time for Dutch courage as Alan appeared as we got to Blundell Park and John introduced us. I was happy with that, but then John mentioned the book and a date was set to visit Alan's house and discuss the project further.

In truth, my head was swimming. The sum of massive Town fan plus a few Cod Almighty articles didn't really seem to add up to Alan Buckley's autobiography. I was out of my depth before a biro had been chewed.

As I sat, trainer-free, in McMenemy's that evening I watched and listened as Alan held the room for almost three hours with a superb array of stories about not only Grimsby but Forest and Walsall. There cannot have been anyone present who was expecting to still be agog approaching midnight, but that was what happened, and I knew that getting the stories out of Alan wouldn't be a problem. Writing them as if I was him? Well, that screamed problem in big fancy letters.

With JT there to metaphorically hold my sweaty hand, we went to Alan's house for our first meeting. I was over-equipped with three notepads, four Grimsby Town books (there are only five available, I think), a massive dictaphone and eleven pens. I was also shitting myself.

That first meeting in May 2012 was horrible. John did a lot of my talking; Alan was super and I sat, thinking hard about what questions to ask and how on Earth that 15-year-old Pontoon lad had got himself to this point.

We agreed to take it a week at a time, with the only aim a chapter or two. I think I pretended that I had all of the necessary skills, contacts and equipment to make writing Alan's book a very easy process. The truth? I didn't know where to start.

I bought an old copy of a Walsall season-by-season book and started to make notes on Alan's career using Wikipedia as my guide. It at least gave me a structure. At this very early stage the plan was to take it a season at a time and hopefully this would form the backbone of the book.

The first session without JT was a whirlwind. Alan did very well to make me feel at home but we were still getting to know each other. At least there were 1,700 games in professional football and a head full of memories to go on. There isn't a Paul Thundercliffe Wikipedia page.

I had bought a new digital voice recorder, laid it down on the table and then knocked my tea over. The withering look I got at that point was the only one in 18 months but it filled me with fear. God knows how Kevin Jobling coped.

Essentially that first two hours was Alan talking and me nodding with the odd question thrown in. Even at this embryonic stage it was clear that Alan's mind was sharp and his memory excellent. It was also clear that I didn't have a clue what I was doing.

I had bought a new digital voice recorder, laid it down on the table and then knocked my tea over. The withering look I got filled me with fear

I went home, ignored my tea and transcribed the last two hours of my life. At this point it didn't really hit home that I was taking longer to write down what happened but I was excited. After a couple more of these sessions I had written up 5,000 words. It was a chapter. The first chapter.

I sent it to JT for him to have a look. It came back with some ideas about structure but in truth it was little more than a transcript of Alan speaking. It wasn't interesting. I had sort of found Alan's speaking voice but what I really needed to do was to find his written voice.

I thought it might be my lack of Forest and Walsall knowledge, so we fast-forwarded to that Wembley season. I thought that if I wrote about something I knew this would be easier and I would find that written style. The session was certainly more enjoyable; I was more confident and chipped in more regularly but again, the resulting chapter was disappointing. It didn't quite read like Alan had written it. It was too fancy, too 'written', if that makes sense.

Then it changed. Two things were happening. The sessions at Alan's house were getting more productive and little more relaxing. Alan was always engaging but was beginning to trust me and the stories were flowing well. The best bit at this point, about two months in, was that Alan was happy to answer anything and was honest about it all. He made it quite clear he wasn't going to slag anyone off but if there had been an issue with someone he talked about it.

The Alan Buckley I was talking to had mellowed, taken stock. Whatever the outcome of these sessions, he was enjoying the experience of talking about what amounted to a very good career in the game. He was very different to what I expected, and I knew even then that if I could find that voice then we could have a really good book.

The strategy of transcribing sessions was beginning to take its toll. We were doing a two-hour session every week, taking a season at a time, but I was struggling to get everything written up before the next session. I had seen one of these voice recognition programs and thought that would do the trick. I eagerly bought one plus a digital recorder and taped Alan talking about his 30-goal season at Walsall.

This sped up the process, but it didn't always work well. One passage about AB's debut for Walsall read:

Luckily I could change it afterwards for it to look more like it should. By now each session was amassing about 3,500 words, so after about ten weeks we had about six or seven chapters.

Two of these led us into the next stage: trying to get a publisher. Alan's stories were proving fruitful and there was no doubt that we had a book that Walsall and Grimsby fans would enjoy. We agreed to take it to the next stage and see if there was any interest in the literary world...

Coming soon: part 2 of 'The making of Pass and Move', in which (as you've probably just realised) Paul and John try and find a publisher.

Pass and Move is available as an ebook at Amazon, iTunes and other online retailers. Please choose your supplier ethically.