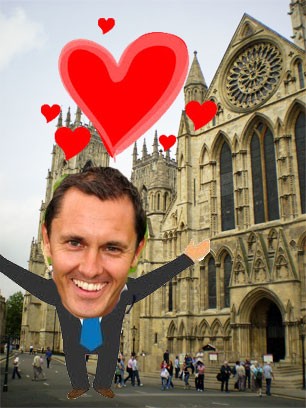 GRIMSBY Town manager Paul Hurst has confirmed that another York City player is joining the Mariners – and admits his Minstermen fixation won't end there.

The arrival of Jamal Fyfield from Bootham Crescent this week will take the Mariners' ex-York contingent to five alongside Scott Kerr, Patrick McLoughlin, Chris Doig and Alex Rodman.

"I haven't actually seen Jamal play," said Hurst earlier today. "But he's been on the books at York City, so that's good enough for me.

"Jason Walker's approaching the A180 as we speak, and then we'll be taking a look at Matty Blair and Danny Parslow. We're also expecting York City's kit man and coach driver on trial next week, followed by the tea lady at the end of the month."

Having signed basically the entire promotion-winning Minstermen team of 2012, Hurst intends to go a step further and transform his team into an out-and-out York City tribute band.

"If you look at outfits like the Bootleg Beatles and Australian Pink Floyd, they've made a great success," the Town manager said. "And by reassembling York's promotion-winning Conference team, there's no reason why we can't do the same.

"We've got the personnel. Now we intend to perform cover versions of all their biggest hits from that season.

"There's the 7-0 romp against Kettering. The 6-2 away at Salisbury. And we'll finish the set with the FA Trophy and play-off final double. We're looking at the O2 Arena for that.

"Hey, and you know them tribute bands that have really clever names like Oasish and the Counterfeit Stones? Well, we're planning to rename the club New York City FC! Do you get it? We'll be like a new York City!" concluded Hurst, before tailing off and mumbling a bit.

Meanwhile civic and Anglican leaders in Grimsby have denied that the recent renaming of St James' Church as Grimsby Minster forms part of a concerted effort with the football club to imitate the city of York.

"What?" said North East Lincolnshire Council leader Chris Shaw, hastily closing the lid of his laptop. "No, ha ha, of course these aren't plans for a railway museum and chocolate factory."