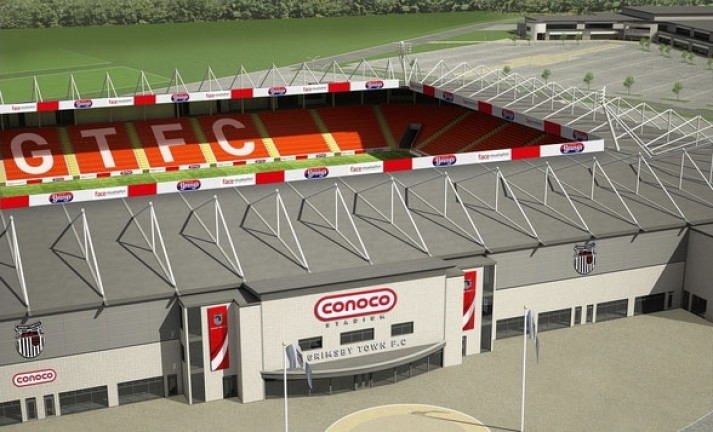 The last time Grimsby Town decided to relocate, it was a simple question of looking at what land was available, doing a deal with the landowner and literally picking up a couple of the stands and moving them. Mind you, this was 1899, after Town had been pressurised to leave Abbey Park as a result of the locals' unhappiness with the rowdy behaviour of some of the players and supporters. The latest search for a new ground has now being going on for 20 years – and one of the concerns of residents about the current proposal is, again, the behaviour of football supporters en route to the stadium.

What was so simple back in the Victorian age is now a costly, complex and frustrating exercise. For Grimsby, however, it seems more complicated than most. Countless clubs have relocated and settled in to new grounds while the Mariners have been talking about it. Times have changed. Twenty years ago, Town feared that, without a 20,000 all-seater stadium, they'd be excluded from the breakaway 'Premier League 2' being discussed by second-tier clubs. Now, with the team stuck in the fifth division, that size of ground is no longer necessary.

The shortcomings of Blundell Park have long been recognised, since well before the decision in the early 1990s to look for a new home. In the 1980s there was an idea to build a bridge from Harrington Street over the railway line to provide matchday car parking space. But the cost of acquiring sufficient land to build a new Main Stand has always been a problem, as the Harrington Street houses sit so close behind it.

A supporter's idea about five years ago involved turning the pitch through 90 degrees, requiring only around 12 houses to be bought, to build a new stand beside the sea. The then chairman and now major shareholder John Fenty wasn't having it. Good money after bad, he said, no car parking, and still costly in terms of securing the necessary land.

Great Coates and the Fentydome

Having decided that Blundell Park couldn't be upgraded, the club focused on a site next to the A180 at Great Coates and got embroiled in a long and costly exercise. It went through all sorts of planning hurdles and eventually came out the other side with a planning consent. However, the conditions placed on the consent seriously restricted the club's ability to implement it.

Town lost £350,000 on Great Coates. Maybe the shortcomings should have been spotted earlier, but the club seemed reluctant to back down

The cost of building the new stadium would have to be significantly subsidised by what Fenty consistently refers to as 'enabling development'. This means a development that can be attracted to the site to cross-subsidise the stadium, thus 'enabling' it to happen.

But by the time North East Lincolnshire Council (NELC) had granted the planning consent for Great Coates, the enabling retail development was no longer attractive to the market. A number of food and non-food retailers were courted but a deal couldn't be done.

The council, too, lost interest, and the dream of an iconic (steady on) development on the gateway into the town was abandoned. Last year the club admitted that it had lost £350,000 on the project. Maybe the shortcomings of Great Coates should have been spotted earlier, but the club seemed reluctant to back down on a proposal it had invested so much time and money in trying to bring to fruition.

By now the council had come to prefer the idea of a new retail park closer to the town centre. Several alternative sites were explored, none of them realistic. The club then focused on a piece of grazing land just off the Peaks Parkway, another edge-of-town location. A video was produced starring Fenty and five uninterested horses. Although more knitted in to the fabric of the town than the Great Coates site, Peaks Parkway is still on open land and some distance from any local centre or public transport facilities.

The current proposal is for a 14,000-seater stadium with a host of community, sporting and commercial developments alongside. The cost of building the stadium is to be met through an enabling development, again, which has not been quantified. By rooting the stadium within a wider proposal for community facilities, the project may benefit from grant funding and be more palatable to the council than a purely commercial scheme.

There are a number of difficulties with the Peaks Parkway scheme, some of which blighted the Great Coates project. As John Fenty has recently admitted, finding the commercial 'enabling' development is not going to be easy. The recent press conference and publicity material do not indicate that any of this has been secured. Instead, Fenty argues that planning consent probably needs to be in place before commercial parties will come on board.

The difficulty is in trying to work out what forms of commercial development are likely to be supported by planners, will be attracted to the site, and can provide surplus income to cross-subsidise the building of the new ground. Even in the boom times of ten years ago, huge furniture stores, DIY stores and high street stores weren't exactly knocking on the Great Coates door. Now, big store retailing has had its day. Most of the profits in food retailing are being generated by discount food retailers Lidl and Aldi and the smaller formats of the national players.

Ironically, Blundell Park, set in the heart of a neighbourhood badly in need of regeneration, is an ideal location for a community facility

These firms like being closer to residential areas than Peaks Parkway – and will not bring in much additional finance in any case. Internet shopping has dented the demand for new floorspace, and out-of-town is no longer in vogue. Cinemas, hotels, restaurants and leisure schemes are now often looking for town centre sites rather than being out on the edge of things.

A further problem with any relocation is that – unlike grounds such as Shrewsbury's Gay Meadow, where housing developers were falling over themselves to build riverside apartments – Blundell Park doesn't have much development value. Not every house buyer would pay over their budget to have the site of the Pontoon end penalty spot in their back garden. Ironically, Blundell Park, set in the heart of a neighbourhood badly in need of regeneration, is an ideal location for a community facility.

Lessons from others' success

Rotherham United's New York Stadium seats 12,000. With some excellent design features including an impressive roof, it is not a bad model for Town to aim for. (The ground was built on the site of a company that exported fire hydrants to New York; hence its name.) That stadium cost £20m to build, was part-financed by chairman Tony Stewart, and required the council to buy the site. Peaks Parkway also relies upon a land deal with the council.

Chesterfield's new stadium cost £11m and has 10,500 seats. That ground, again on a former factory site, was cross-subsidised by a huge Tesco store development next door as well as commercial developments such as hotels and car showrooms. However, commercial times have changed since the original deal was done in 2008 and the Spirerites got everything lined up at the height of the property boom.

For any new ground to succeed, its community role must be maximised – as both Chesterfield and Rotherham have proven with reasonable non-matchday income streams and use. Both of those grounds, though, are much closer to the heart of their communities than Peaks Parkway is to Grimsby's. NELC would need to be satisfied that from a community perspective this was the right location, and that the town centres would not be harmed by any commercial development on the edge of town.

Peaks Parkway is not going to stand or fall on the number of signatures on a petition, many of which will be made up anyway

The club needs to learn the lessons of the drawn-out and costly Great Coates experience, when thousands of pounds were spent to put a dot and some nice colour on a planning map for a scheme that couldn't be completed.

At the moment there are many unanswered questions about the viability of the Peaks Parkway scheme. It is not going to stand or fall on the number of signatures on a petition, many of which will be made up anyway. The issues raised by objectors are unlikely to be show-stoppers. What is important is whether the council considers this the right site – and most of all whether, commercially and financially, it stacks up.

The challenge of relocating a football ground is far more difficult now than it was 10 or 15 years ago. Development realities bite harder and many commercial schemes, particularly in northern towns, struggle to stand up on their own, let alone cross-subsidise another project. There's a long way to go yet and still time for those watching a dull game at Blundell Park to imagine how the old ground could be expanded and rebuilt into a modern stadium. Finding the money for it is a different matter.

What are your thoughts on Peaks Parkway, Great Coates, and Town's tortuous quest to relocate? Let us know using the Cod Almighty feedback form.