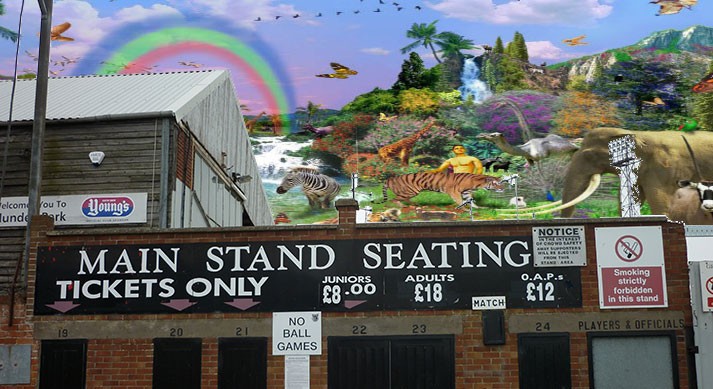 GRIMSBY TOWN manager Paul Hurst is refusing to get carried away with this week's surprise realisation of paradise on Earth.

Speaking after humanity celebrated the end of poverty, hunger, disease, climate change and inequality in every corner of the planet, the Mariners boss pledged to keep his feet firmly on the ground.

"In the dressing room we're taking it one day at a time," said Hurst. "The reality is there's still a long way to go.

"The first priority is to avoid relegation. Then we can look at stopping the collapse of civilisation and the extinction of the human species. Once that's out of the way we can start to think about the play-offs."

Hurst was quick to refute the suggestion on internet messageboards that his cautious response to the salvation of the world will result in an overly defensive approach from his players during matches at Blundell Park.

"Certain people out there will say we should be making more of the fact that humanity and the Earth are saved forever.

"But if you look at the teams who've gone up through the play-offs in the last few years, none of them have done it in a season that's also seen the end of universal human suffering."

People will look at the four-match winning run and the miraculous solution of all our planet's ills, and they'll think the lads should be on a bit of a roll

Looking ahead to the weekend's clash with Chester, the Town manager showed similar restraint.

Asked whether this side would be favourites to take all three points at the Deva, Hurst said: "People will look at recent results, like the four-match winning run, Barnet and Bristol Rovers slipping up, and the miraculous solution of all our planet's ills, and they'll think the lads should be on a bit of a roll.

"We have to remember that utopian conditions are the same for both teams. And in many ways Grimsby experienced the end of the world when the then EEC introduced fishing quotas in the mid 1970s."

And Hurst declined to be drawn on whether he believed his side would achieve the dream of return to the Football League at the end of this season.

"I know some people are looking to the end of the season as the chance for us to seal an unprecedented double of paradise on Earth and promotion from the Conference," he said.

"I'm sure the fans would like that. Will it happen? We'll see. The most important thing is we just need to keep us shape.

"Obviously it's nice to get the perfect world, but in some ways the deeply flawed old system of competitive nationalism, war, mass consumption and commodification, the destructive exploitation of working people, and potentially catastrophic shifts in global weather patterns was more satisfying."