Grimsby Town's greatest ever right back

You have watched Town since the mid-80s, you are compiling your Great GY XI and you are stuck for a right back. Maybe John McDermott squashed your hamster. Let Rob help you out of your dilemma.

Yes, I have him above Brian Laws, but then I have myself above Brian Laws. I have him above Dave Moore. Ditto. But in my 50 years of watching Town, McDermott falls just behind the no-nonsense number two shirt-wearing John Stone, star of Town's 1979-80 championship-winning team. He is light years behind Grimsby Town's greatest ever right back, Lord Dave Worthington. 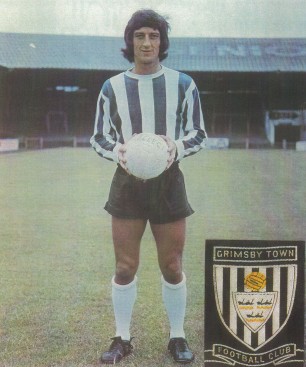 Statistically speaking, of course, no other player in Town's history can hold a candle to McDermott. Likewise, statistically speaking, Bob Marley's Legend is the album that has spent the longest time ever on the charts. But that doesn't make it the best ever album, does it? It's certainly not in my collection, for the same reason McDermott's not in my team.

In my view, it's also about character. Now, that's not to say that McDermott does not have character. I'm sure he does. But Dave Worthington had real character. Having a perma-tan doesn't make you a great footballer, I agree, but when Worthington stepped onto Blundell Park looking like he'd just spent a week in Majorca, you could tell that he was the business. And when he flicked the ball up, trapped it between his shoulder blades, and then rolled it down his right arm, you could tell that this guy wasn't going to let some nippy little left-winger get the better of him. And he never did.

Worthington was one of three footballing brothers, one of whom (Frank) scored the greatest goal ever in the history of football. In his first season with Town, Worthington showed a versatility McDermott can only have dreamt of. In the days when shirt numbers meant something, Worthington spent 1966-67 wearing the number seven, eight and nine shirts, and scored seven goals, before finishing the season wearing the number two shirt.

McDermott was a very good full back, but Worthington could also play centre forward equally wellThe following year, he played 50 games, mostly wearing the number two shirt, but occasionally in the number four, seven, eight and nine. In a season that saw Town relegated to the old fourth division, Worthington was the best player we had.

In the re-election season of 1968-69, he added the number ten shirt to his repertoire. Again, he was the best player we had. What I see in McDermott is a very good full back, but not a player who could have filled the centre-forward position and played equally well.

Worthington took over the Town captaincy for the start of the 1970-71 season. An inspirational leader, he played in every game, despite occasions when he was clearly carrying an injury. His finest season came in 1971-72, when he captained Town to the old fourth division championship, again playing in every game. Dave continued the captaincy for the 1972-73 season when Town were serious promotion contenders.

He left in 1973, having played a total of 327 games in seven seasons. He also scored 19 goals in that time, more goals than McDermott managed in twice the number of games. As a Blundell Park regular during Dave Worthington's time at Grimsby, I never saw him have a bad game, but I did see him have a hell of a lot of good games.

So there you have it, an argument of sorts against John McDermott's inclusion in Town's greatest ever side. If we could somehow actually watch our best eleven play and Dave Worthington got injured, I'd certainly bring John McDermott on as a substitute. But only if John Stone wasn't fit…

To leap to the defence of John McDermott (or Dave Moore, or even Brian Laws), send us feedback. To vote in the Great GY XI poll, email anthology@marinerstrust.co.uk naming your team and a manager (all of whom must have been involved with Town between 1971 and 2002), no later than 1 April 2015.