Why have Grimsby Town inspired so many writers? Pat Bell asked some of the contributors to We are Town for their views. 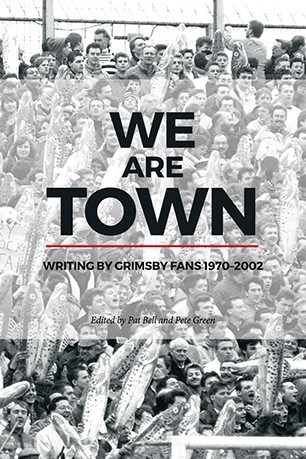 There was one thing we didn't have to worry about when we compiled We are Town: Writing by Grimsby Fans 1970-2002 – a dearth of material.

Rob McIlveen, We are Town will reveal, was the fan whose experience following Grimsby through the medium of a United States phone-in show was one of the highlights of the fanzine Sing When We're Fishing's output. He suggests that the Mariners' turbulent history is one of the draws for budding writers: "There is a deep affection for the club born out of adversity. When promotion comes along it functions as a reward for all the crap that was endured previously."

It isn't just that 32-year period of success. It was also the dark times before, during and since. Fans in the late 60s, the mid 70s and the late 80s all had very good reasons for thinking the club might never prosper again, against the decline of the fishing industry and the increasing polarisation of wealth in football, starting with the abolition of the footballers' maximum wage and continuing through to the formation of the Premier League. Every moment of Town success was lent extra romance because it was so unexpected.

The Mariners' successes, against the odds, reflect the nature of the town. Sarah Barber, whose witty put-down of those men who think one sex has a monopoly on the game you'll be able to enjoy in We are Town, suggests Grimsby's isolation forces us to be creative. "It's a place that is the immediate butt of jokes, about fish or grime or both. We are a bit like Liverpudlians in that many of us have to leave to follow our dreams, and, if we are honest, wouldn't want to go back permanently. We are fiercely protective of it, yet secretly accept it's not pretty or affluent. You need a keen sense of humour if you are from Grimsby, but woe betide anyone from outside who seeks to criticise it."

The shortage of local education and employment opportunities has driven many a Grimbarian into exile. That so many Town fans live away from the area is the most frequent explanation for the richness of our fanzine culture. The local fan might vent that deadpan Grimsby humour over a pint or two after the game or in work on Monday morning. The exiles must take up their pens. After all, you rarely write love letters to people you see every day. Phil Ball, who now lives in Spain, is well qualified to comment. "The 'escapees' have a more detached but equally sympathetic view of the club. Distance creates something slightly different, perhaps."

The 'escapees' have a more detached but equally sympathetic view of the club. Distance creates something slightly different, perhaps

Once a few writers get going, it opens up the way for others to follow. Bill Brewster, the first editor of SWWF remembers: "When I started at When Saturday Comes in 1987, I wrote a piece about Matt Tees and because of that Phil Ball got in touch. Through Phil I met Rob McIlveen. Without When Saturday Comes, I doubt very much whether SWWF would have started, but once it got going, it flushed out other writers like Steve Plowes."

In the last few seasons, the club has made a conscious effort to harness this tradition, inviting fanzine writers to write for the matchday programme, The Mariner. Helen Tabois, a regular contributor to The Mariner, has provided one of the previously unpublished chapters written specially for We are Town. She also cites the effect of exile ("When you can't go to as many matches, you need to do something else, so you write"). But, she admits, this doesn't explain why we have so many good writers. "I'm stumped. Genetic mutation due to too much haddock? After all, fish is supposed to be brain food."

Tony Butcher's match reports have been chronicling the decline of the Mariners since 2001. In We are Town, you'll be able to read his memories of the players we voted the Great Grimsby XI. After suggesting that the club provides "a medium for nostalgia and localised pride", he adds: "Or we are all a bit odd." However, he goes on: "Of course there might be good writers about other clubs. We just have not noticed because we are not looking."

That is a fair point. The internet has transformed the ways we can express our support for any club. But amid all the millions of words, it is hard to make any single body of writing stand out. That is where We are Town comes in. It captures forever some remarkable times in the history of Grimsby Town, through the eyes of some funny, thoughtful, irreverent and evocative writers.

We are Town: Writing by Grimsby Fans 1970-2002 is published on 13 November 2015. You can pre-order copies for £10 (plus £3 postage) from the Mariners Trust. Tickets for the book launch at McMenemy's on 13 November are also available for £25. The ticket includes a copy of We are Town, a three-course meal and the chance to meet some of the players and the manager from the the Great Grimsby XI.