Rich has been trawling through the records again, this time in search of players who have appeared for Town once and once only.

Joe Dolce, Steve Brookstein and the St Winifred’s School Choir - all household (ish) names who scored just one hit single before failing to trouble the UK charts ever again. But do we have an equivalent in the world of football? More specifically do we have anything of the kind in the world of black and white, North East Lincolnshire football?

After a night or two poring over volumes of Mariners' reference books and the internet I think we do. Please allow me to present to you The Grimsby Town One-Game Wonder XI: players who have for one reason or another only managed to pull on the shirt and take to the field once during their Grimsby careers. It includes both those who started their match and those coming on as substitute; players on loan and full member of the squad. Due to a surfeit of midfielders and wingers I’m going to be playing a 3-5-2 formation.

Strap yourselves in and prepare to be slightly underwhelmed.

Between the sticks we actually have two contenders. Lee Pratt (Stoke City 5-1 Town, 9 May 1987) conceded five goals but it didn’t matter as we’d already been relegated under Mick Lyons. I’ve chosen Richard Dawson (Leeds 0-0 Town, 9 February 1985) though, who had a promising debut/final game for us as he kept a clean sheet. He was shown the door by new manager Lyons. 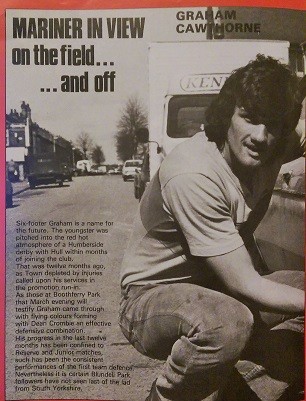 Centre half Graham Cawthorne (Hull 2-2 Town, 25 March 1980) - apparently had the nickname "Hulk" at BP, although how he got that without being seen on the pitch there isn't obvious.

Robert Busscher (West Brom 0-1 Town, 18 August 2001) managed just 15 minutes as he came off the bench to replace fellow Dutchman Menno Willems. Strictly speaking Busscher isn’t a defender but I’m struggling to find another player for the back three so he plays where I need him to. It’s not like he staked a claim to the midfield is it?

It seems like Town sign wingers and don’t play them so expect this team to be good up and down the flanks.

American Jake Sagare (Reading 2-1 Town, 26 April 2003) made his sole appearance with Town already relegated, as a lone striker. He won’t be too upset to find himself in the midfield of this XI as he saw himself as a winger and so does his Wikipedia entry. After a season of failing to break into a side also boasting Darren Mansaram, Jake headed back to Major League Soccer and his former club Portland Timbers.

James Lawson (Town 0-1 Stockport, 23 September 2006) spent a month with us on loan from Southend. Wikipedia says he was recalled but The Fishy says he was homesick and allowed to return to Southend by Town manager Graham Rodger.

Australian Nick Rizzo (Town 0-2 Chester, 9 January 2007) started at Liverpool and has had a reasonable career, including being capped for the national side. His time with us, on loan from (spit) MK Dons, then was something of a blip.

Paul Ashton (Town 1-1 Morecambe, League Trophy, Morecambe won on penalties, 18 October 2005) was on our books for almost two years. But in his one appearance he scored! Played one, scored one. That’s 100%. Best to quit while you’re ahead son; it’s only going to be downhill from there.

For my last winger I’m choosing Nicky Walker (Town 2-0 Nuneaton, FA Trophy, 13 December 2014) who joined us on loan from Rotherham - he declared Paul Hurst a legend - and pulled on the shirt for a few minutes. The Millers let him go in the New Year. He went on to sign for Boston.

Last but not least is Jermaine Palmer (Town 1-1 Morecambe, League Trophy, Morecambe won on penalties, 18 October 2005). Palmer was signed by Russell Slade after impressing in a reserve team fixture while on loan from Stoke but struggled to break into a side which included Michael Reddy and Gary Jones.

You will have spotted that three of my eleven one-shot deals made their appearance in the same game, although they weren't all on the field at the same time; Slade was subbed for Ashton. Three one-hit wonders in one game probably says a lot about the nature of both Russell Slade’s tenure and the life of the modern professional footballer. But let’s not dwell on that. For me, after trawling through the records to compile this team, finding three in one game was manna from heaven, especially as 18 October - the same date John Fenty called on Mike Newell to say adieu - is my birthday.

Have a think, trawl the internet and leaf through your pile of match programmes, fanzines and Town-related books and let us know if Rich picked the right XI? If not, who should he have included?