And to think we could have been having a wet weekend in Wales.

Oh well, back to the bread and butter pudding of a wet weekend in Welling, where the electricity is on request, and eight hundred Mariners marched on the metropolis. It's so romantic and some are gettin' frantic wonderin' what Town are gonna do. Please, please don't sit on the plants, especially outside the local trattatoria, as you'll get wet pants.

Town lined up in a 4-4-2 as follows: McKeown, Tait, Gowling, Nsiala, Robertson, Arnold, Clay, Disley, Monkhouse, Amond and Bogle. The substitutes were East, Pearson, Henderson, Marshall and Pittman. With the only change being the reintroduction of the statutory Conor, the slow de-scousing of the building continues. Brown and Mackreth were reduced to desultory mud-running duties with Dave Moore. Brown was very desultory, looking like he'd gone off Town and would happily get on the 3:21 back to his mum.

What a terrible example for the youth of today. 'Water Pumpin', the latest release by that notorious Californian rapper, LA Squirrel, was a prominently placed advertising board. Shocking, positively shocking. Ah, froth yourself down, the Daily Mail can turn off its auto-rage engine: he's a plumber from Plumstead.

As three o'clock approached the three steps of the Tree End filled from left and right. The two tribes met in no man's land with just a bloke in a fluorescent jacket mooching around between them. I don't think the Welling supporters' trust has tested a hydrogen bomb recently, so the world is safe for another week. But when you hear the hair attack warning, you and your family must take cover.

The pitch was muddying up well, with many a sloppy brown patch amid the tufts of greenery. Fasten your seat belts – we're in for a lumpy ride. 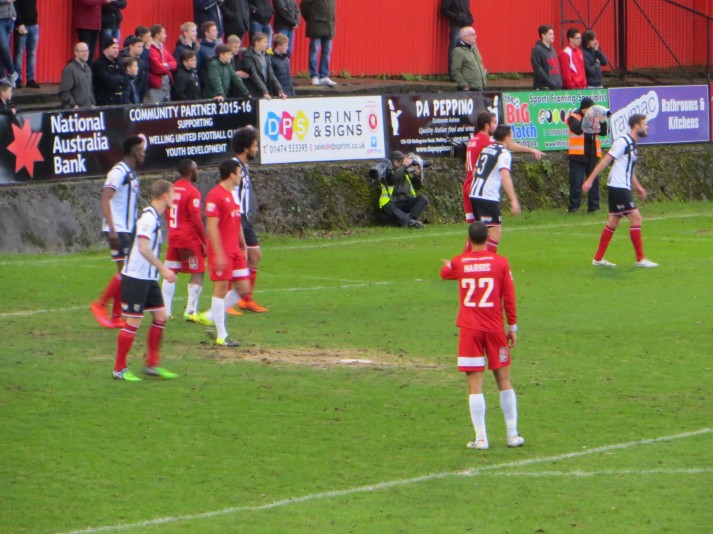 Town kicked off towards the bus stops and boarded up shops as the players slopped around. A throw-in, a goal kick, a throw-in, all wrongly awarded by the unseeing eyes of the officials. We could hear the edge on that Welling wallop – there's no need for hotspot or snicko. An honourable man would have walked, sir. It's just not cricket.

Triangles and rhomboids with an ellipse thrown in for good measure. Arnold crossed beyond the furthermost outpost of civilisation, Monkhouse swickled and Bogle blocked. The ball returned and Robertson somersaulted over a straining stray swipe. A goal kick.

Welling wellied, Town ticked over. Small men will not defeat tall men in the air. Bring your slings next time.

Bogle boggled by the corner flag, Monkhouse delicately dinked and Arnold sneaked behind to avoid shooting inside the six-yard box. Monkhouse flat-clipped, Amond cushion-headed perfectly into Omar's path. He who is Bogle waited, steadied himself, picked precisely into which part of the net the ball would go and passed against a sliding redman.

Bogle turned about 30 yards out. As he was about to shoot the linesman flagged and the referee gave the offside. To Town. Those are the facts; the relationship to logic and proportion is entirely in the mind of the beholder. Ooh look, a perfect hat-trick of buses. One going left, one right and one stationary. It's like the transept of Venus for transit fans. Gricers can't grumble at that.

Moments occasionally happened. Town had the ball, Wellermen approached but bounced off the Town toothpaste. Wellard? Well soft. Get up and stop whinging. Kabba almost got inside the penalty area and Corne bounced off Toto's invisible hand. Gowling headed away a cross and there was mucking about with little squeaks and squawks. That's them out of the way, if they were ever in our way.

Up flew McEntegart's arm to splendidly parry. Well done young man, just don't do it again today. Save them saves for Cheltenham and Fruits of the Forest Green

A shot! A save! And only after half an hour. Monkyhouseman drifted infield and rolled Amondward, who flickered a flick to the demon barber. A short back and sides for the Dizzer, who curled gently into the arms of McEntegart.

Another shot, another save. A real proper one with diving and clapping and stuff. Clay excavated and ploughed down the middle, ticking left to Omar, an Omar shuffle and thwack. McEntegart flew low and left as the ball swished high and right. Up flew an arm to splendidly parry. Well done young man, just don't do it again today. Save them saves for Cheltenham and Fruits of the Forest Green.

And the striped horde poured forward, sort of. Amond chased a chip, scrunched wide and scribbled lowly across the face of goal. We say ooh, you say aah, let's call this a shot that was slightly off target.

Look, we were being polite. We asked you not to do it again. Amond chased a punt 'n' flick and was free down the centre in the 'D'. He waited for the ball to drop and volleyed across the keeper, who guessed right and dived right, spectacularly pushing aside to his right. Right, don't do it again. We mean it. There are more of us than you.

And still Town avoided direct eye contact with the goal. A punt, a Bogle flick and Amond was almost free. A tackle and block and well… nothing happened. A flick and trick and Arnold flamblasted wildly through the keyhole and out towards the Giggling Sausage. Add Monkhouse to the list of almost somethings and some things that almost didn't.

And in the last kick of the half Monkhouse crinkled straight at the keeper from ages out.

Neither team made any changes at half time, but the mud patches were growing.

And we carry on carrying on as we carried on before. Town with the ball, little red men scurrying around, trying to keep their hair dry. Hey look – tactical things. Monkhouse drifted infield, Amond drifted to the wing and the Wingmen were wonderfully confused. Amond sauntered leftwards, crossed delightfully, but Arnold ducked out and softly slopped a header wimpily.

A-ha – sans Townsend we're back to your basic Bogle free kick. Felled 20 yards out, Omar arose to do his square on squiggle slap. The ball flittered lowly and left. McEggtart scooped without fuss. How nice, the game was played permanently in front of the bulk of the crowd. Good for the hard of hearing.

Monkhouse was a-tumbled to little grumbles and the free kick was lofted deeply to the far post. A bit of your old in-out/in-out head tennis mumbled the ball steadily further in and out. Finally Tait, inside the Town half, walloped a garryowen down the centre. Subtle it wasn't, but what followed was both subtle and superb. The ball descended just inside their penalty area, where Amond nudged his marker to gain an edge, and calmly, craftily loopy-head high, high, high. The keeper got in a McEntangle and a little corner of Welling that is forever Grimsby erupted in mass joy as the ball dropped into the net, right down the middle.

Pandemonium from a punt as Bogle toggled Amond free on the left. He looked up, saw attack ships lining up and crossed directly onto Disley's head. The sagely nod struck a red thigh and rolled, rolled, rolled into the centre of the area. Omar saw the realities of modern life and allowed Amond to calmly sweep the ball around fingers and toes and into the bottom left corner

East replaced Arnold, to really nullify the non-threat from their left. A subtle return for the Parslow Point?

Yes, he is Pádraig Amond and, yes, he does score when he wants. How long is that contract?

Up to this point McKeown had caught two crosses and fly-kicked a couple of times. And waved to the passengers on the top deck of the buses passing by. Shall we forgive him? They crossed from their right to the near post and the ball embarrassed itself through McKeown's gloves and dropped behind the pink plunger, four yards out. Tiny Kabba, with an open goal before him, slipped and flipped onto the crossbar. Tait scrumbled away from lurking red toes but straight to Corne, who stamped a flick way, way over into the streets of London. In his eyes you see draining London pride, hands held loosely at his side.

And we're back to your daydream believing, for there is something hiding in the wings. McKeown drop-kicked into the heart of their half. Amond sidled in front of the defender and calmly steered a header out to the unmarked Monkhouse. The old beard looked up and saw Omar sprint into the centre, dragging two defenders across. Look beyond, see the future. Monkhouse flat-clipped into the future, where Amond had sneaked and brilliantly looped a header over McEntangle into the bottom right corner. 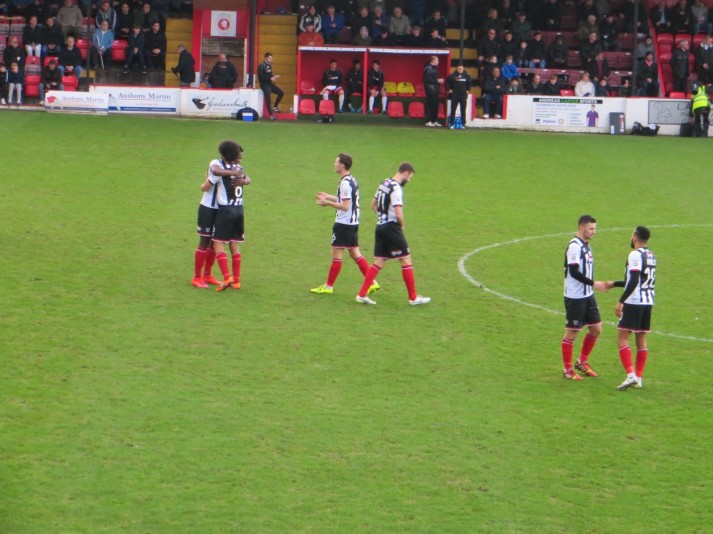 After another shot blocked following slippery dippery doings, Our Man Amond was replaced by Pittman. Yes, he is Pádraig Amond and, yes, he does score when he wants. How long is that contract?

Shall we have pity on the poor?

Omar chased a deflating Wellyman into the corner, picking a pocket or two and setting up a catalogue of catastrophic slip-shod slappings inside the heart of their penalty area. An East shot was blocked by himself and, after a symposium on who did what, where and why, Disley calmly stepped up to curl lowly around a menagerie of flapping flightless birds and into the bottom left corner.

What else? Why don't you just join the party inside the bouncy castle, just let it all flow over you, just feel the feeling, feel the force. Bogle had a wiggle-wallop blocked away, Henderson replaced Clay, Pittman slapsticked a slice out for a throw-in and, in the 90th minute, Welling United had a shot.

On the final whistle the players came over to commune with the masses, with Harris first to applaud us. Harris? Err, yeah, Welling's winger weirdly walked the length of the Town support applauding us.

This was how things should be.

Without promotion all these moments will be lost in time... like Welling's tears in rain... time to make Cheltenham's lead die.