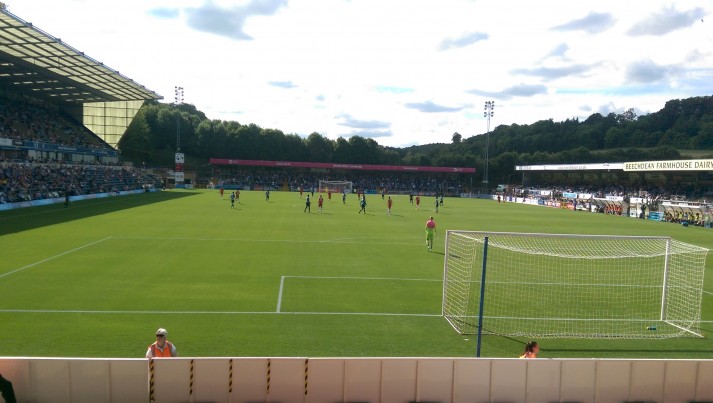 Adams Park is a nice ground with our classic one big stand, three little stands configuration. The location at the back of an industrial estate isn't the best however. It's basically fallen off the edge of the edge of town. This makes for fine rolling countryside vistas beyond the stands but is a bugger if you want to get there by train or have a pint and a sandwich in the town before the game. Anyone who thinks Town should move to Peaks Parkway needs to go to Adams Park and Colchester's out of towner on Tuesday and see if they still feel the same way. It's not just about the two hours spent in the ground. Matchdays should be just that.

Also, there's only one road in, which is plain daft. The place holds 10,000 people. My house has a capacity of 7 when we put the camp beds out but it still has a back door. At least the club addressed the lack of a local bar by putting up a beer tent. This provided much needed refreshment for the thirsty Mariners on what was a sweltering afternoon. Town fans had fine views from the all-seater away stand but we cast an envious glance at the home fans basking on the opposite terrace. The law says we can't have standing at Blundell Park or the Fentydome. The law is an ass when other clubs can have it through timing and happenstance.

The envy didn't stop with the facilities. Our late decision to make a family day of it resulted in an admission price of £83 for the five of us. Already feeling light-headed from the heat, this came as quite a shock. After a bit of 'debate', the guy on the turnstile agreed to let our seven year old in for free. I checked the family prices for home fans when we got in. The £70 we paid was still well in excess of the £48 that a similar sunburnt Wycombe family would have paid. Poor form. On the plus side, all the Wycombe staff were very friendly and helpful. Even the turnstile guy seemed embarrassed at the exchange. I certainly was.

To the football. Town lined up with same eleven that started against Morecambe. McKeown, Davies, Gowling, Boyce, Andrew, Berrett, Summerfield, McAllister, Bolarinwa, Vernon and Jackson. The substitutes were also unchanged: Warrington, Jones, Pearson, Vose, Chambers, Bogle, and Browne. The formation was either 4-3-3 (man with hat in row in front) or 4-4-2 (the placement of the semi colons on the GTFC line-ups tweet).

Wycombe had so many injuries that they didn't name a full subs bench and had lost their last two games 1-0. This is nothing new for a side that has done their best to increase Saturday afternoon trade at the local DIY stores; 15 out of their 18 games in February, March and April finished 0-0, 1-0 or 1-1. In this sense the game represented a great opportunity for Town to build on last week’s win.

I am still getting used to our new lads so don't expect many details about the Wycombe side. I only recognised Dayle Southwell in their eleven. I think Dayle is a good player and a nice lad. Good son-in-law material. I've never met him in traffic but I bet he's the type of lad who lets two cars pull out and gives them a friendly wave into the bargain. Then gives them a flash of the headlights when they give him the double hazard flash as thanks. This sensitivity and niceness makes him vulnerable. You could see he was trying hard against his old club. A bit too hard. After completely fluffing a couple of early touches, the Town chorus of That's why we let you go meant he disappeared into his shell until replaced in the second half. I hope he also heard our applause and chant of He's one of our own when he went off. All's fair in love and war, and ex-players that deep down we still like.

After a bit of early pressure from Town, the early exchanges settled and allowed time to dwell on the assortment of kit crimes on show. Town were wearing red for no reason and McKeown's socks were again the wrong shade of nuclear puke green. The Wycombe keeper took the honours though with a disco biscuits day-glo dye-run straight from a 90s rave, presumably held in one of the local fields.

Whatever we thought of the kits, the keepers weren't having much call to dirty them. Jamie Mack made the only save of note in the first half, palming away a decent free kick. The Wycombe keeper only had to deal with a couple of loopy headers. There was also a run from Jackson that got us out of our seats that was excellently defended by the centre halves in the quartered shirts. That was it for the first half. This was disappointing. We had sat back but Wycombe had nothing to offer except their long injury list. We're not allowed to feel sorry for them either - Jordan Ibe's recent transfer nets them £2.25M from a sell-on clause. Please please please can we start playing Venney, Clifton or Wright? They might not be worth £15million but if we don't play them, how will we find out?

The second half started in the same vein. Whatever the formation, Vernon was only doing the latter half of his 'holds up the ball but doesn't score' role. To be fair, Wycombe's centre halves were their best players and many of our punts were aimed at Jackson. In fact, I can't remember us getting many decent balls into Vernon, certainly not on the ground.

Wycombe took the lead in the 55th minute with a free kick that defied physics. Jombati's curler went over the wall yet seemed to be still rising as it clipped the inside of the post at shoulder height and nestled in the net. Bother.

We have a new side and they haven't settled into an effective pattern of play yet. It was still irritating to see us give possession away so often. I think we were better than Wycombe player for player. You can't drive this advantage home if you don't have the ball. It was really only when we went behind that we saw glimpses of what might be an exciting future. Berrett started to feature and there was movement and flicks and almosts. Bolarinwa hit the side netting, a Gowling header caused a scramble in the six yard box and best of the lot, Berrett's stinging drive was saved low by his post by Day-glo Dawson. Hursty made his 70th minute substitution right on time with Bogle replacing Vernon. A mate of mine down the pub who gives everybody bad horse racing tips once told me that some clubs have appearance clauses in their player contracts. The clause says appearance bonuses are not paid to players who come on as sub after the 70th minute mark. This couldn't be true could it?

Regardless of conspiracy theories, we got level in the 79th minute. Wycombe didn't clear a corner and Andrew slipped the ball to Boyce about 12 yards out with his back to goal. A neat drag back and a couple of ricochets off a defender's shin later, he slung a bobbling left footer into the bottom left corner. Jubilation.

Town should have gone on to win the game but they didn't punish a reeling Wycombe. Instead McKeown was forced into a great save to deny Thompson. Wycombe's plan had become even more obvious when Akinfenwa came on. One route into the ground and one route to goal. He certainly is a big unit and must be a nightmare for defenders. The clock had ticked over to 90 minutes when he used his shoulders to clear Boyce and Summerfield from his airspace and get his head to a long throw. The ball hit both posts before bouncing back out. As our defence literally stood and admired this rarity, Stewart nipped past the statues to smash in the winner. FFS lads.

There were four minutes of added time. Chambers had a chance to save the day when he wriggled free in the area but one of those pesky centre halves got a toe in. The linesman had given several decisions against Town and was summed up by a call at the death. This time Jackson was the wriggler. He got around the left back and into the area near the byeline. He had beaten the man when both fell to the ground. The linesman flagged. Not for a penalty but for a Wycombe free kick. A strange and infuriating decision. "Why would Jackson be pulling his man to the ground after he got past him?" as our freeloading, yet insightful, seven-year-old asked, almost earning herself a match report writing job in the process.

And that was that. Wounded Wycombe presented a real opportunity but we let them away. We were like a faster version of the second half of last season. We didn't string many passes together, relying on slinging balls over the defence for Jackson. I'm no expert on systems but it would appear the blueprint for the rebuild is Slade 05 and not Buckley 89. Too early to panic but it's never too early to be really miffed. Not as bad as drawing or losing in non-league but bloody annoying all the same.