How do you feel about being back in the Football League? It is a strange experience. Despite having supported the Mariners for 70 seasons, when my work in local football is done, I still tend to look for the Conference results and tables first on a Saturday afternoon. It is still Southport rather than Exeter that catches my eye, but it is getting much better. Helping me on the road to recuperation is that we do not have to go to some outlandish parish in the midlands for an FA Cup fourth qualifying round or FA Trophy clash. Seeing a signpost for Chasetown recently left me seriously scarred.

What also helps is a draw in the first round of the FA Cup against one of the bigger names in English football. Bolton Wanderers were one of the founder members of the Football League, although of that dozen, only Accrington Stanley and Notts County currently have a lower-league standing. Between 1911 and 1964, the only interruptions to Bolton's membership of the top flight were two world wars and a two-season stint in the old second division.

Bolton and the FA Cup

Bolton have won the FA Cup on four occasions. Perhaps the most famous was the first, a 2-0 defeat of West Ham in the first final to be played at Wembley. The ground was supposed to hold 100,000; the official gate was 120,000; the actual gate was probably nearer 150,000, almost exclusively male, all wearing a hat or a cap and kept off the pitch by a single white horse. That marvellous Bolton side went on to win the cup again in 1926 and 1929. Five players played in all three finals.

Their last victory was, at least to some in Manchester, the most infamous. This was the 1958 final played against Manchester United in the May following the Munich air disaster that February. The name of Nat Lofthouse crops up time and again in the annals of Bolton. He opened the scoring after three minutes. Then, early in the second half, he went for a ball which was about to be lovingly caressed by the United keeper Harry Gregg. Lofthouse threw himself at Gregg, who dropped the ball after the collision and both the keeper and the ball found themselves in the back of the net.

Perhaps the most famous Bolton final of all is one they lost, the so-called 'Matthews final' of 1953. Wanderers suffered early on with an injury to their midfielder Bell. With no substitutes, they played on with 10 fit men and a passenger. Despite holding a 3-1 lead at one point, Bolton eventually lost 4-3 with Stan Mortensen (later to become a Conservative councillor) completing his hat-trick and Blackpool's comeback in injury time.

The Mariners' first competitive match against Bolton was in the FA Cup, in 1897. Bolton needed a second replay to finally beat Town 3-2. That set something of a pattern, Bolton winning both subsequent FA Cup ties, in 1933 and 2000.

The sides have met twice in the League Cup. In 1960, two goals by Ron Rafferty couldn't stop Bolton winning 6-2. Five years later, Grimsby's run to the quarter-finals included a 4-2 win against Wanderers, the goals from Bobby Ross and Ron Foster with a brace for Rod Green.

In the league, Town have won 16, drawn 17 and lost 21 of the games played between the clubs. Grimsby have not beaten Bolton since 1983: 16 games without success. That is no one-off: our recent record against clubs north of Manchester – like Accrington for instance – is appalling.

With that record, Town's best chance on Saturday might be to recall Harry Clifton from his loan at Grantham. His 1940s namesake took a definite liking to the Trotters.

The Mariners played Bolton Wanderers in the old first division in the first two seasons after World War Two. We won 2-1 at Bolton in late September 1946 – in weather more suited to cricket – with two goals from Harry Clifton, a Hamlett penalty the riposte from Wanderers. Town then drew 2-2 in the reverse fixture in February 1947, in a game played on a snow-bound Blundell Park. Clifton, of course, scored both our goals while Lofthouse bagged one for Bolton. Hamlett was the second scorer for Bolton, again from the penalty spot.

The piles of snow around the ground added to the attraction for the boys in the crowd. In those days bed sheets would be taken round the perimeter of the ground by four people - each holding one corner - that people might throw coins into the sheet for the designated charity of the day. The last collection sheet I saw was in Bradford when Newport County had severe financial problems and roughly £50 was raised for County. On that snowy day in 1947, the people carrying the collection sheets were the target of many a snowball.

Town survived the first post-war season, but there were players in both sides no longer fit for top-flight football. Grimsby did not have the resources to replace ours, and a series of irrelevant purchases only added unnecessarily to the wage bill. 1947-48 would be Town's last in the first division. 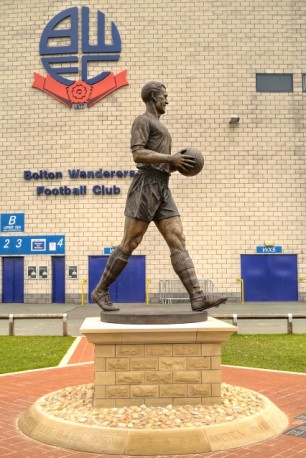 I watched the home game that season on a cold, dank Saturday afternoon, part of a small crowd. We lost 2-0, Billy Burnett making his debut for Town in place of an injured Harry Clifton. We also lost 2-0 at Burnden Park. Lofthouse made the first goal and bagged the second. He won the race for the ball with our pre-war international keeper George Tweedy as they collided and both were knocked out. The incident captures the commitment to the cause of both players, although Lofthouse decided not to return to the fray.

I visited Burnden Park for the last Town match to be played there in September 1996. The ground was tired, the numbers at the game alarmingly small at just over 12,000, and the atmosphere was non-existent. We lost 6-1, with the useful Paul Trollope notching our only goal. On a night of many disappointments, a big letdown was the display of our sub, one-time international Neil Webb. He played in midfield but was certainly not box-to-box and was never seen in Town's colours again.

Bolton moved to a new stadium in Horwich in 1997. I made my only visit there on 20 February 2001. Parking seemed a long way from the ground and the talk at that time was that the pitch did not receive sufficient sunlight to let the grass grow. The game finished 2-2. We twice gained the lead, with goals from Paul Groves in the 35th minute and Zhang Enhua in the 64th, but Bolton netted through Gudni Bergsson after 61 minutes and Bo Hansen on the 74th. There were moments of high tension and Nicky Summerbee, a target of Town fans, was replaced at the interval.

Our manager then was Lennie Lawrence, and we had one foreign import, Menno Willems, in a defensive role which suited him better than the midfield positions Lawrence usually gave him. Centre-back Zhang deigned to play for his pocket money; he was one of our better players but helped the Town overdraft increase. That was the season Paul Groves scorched the earth against Fulham to keep us in the second flight – but good players had left the club. Lawrence accepted an appointment as joint assistant manager to Dougie Freedman at Wanderers in 2012, but when Dougie was sacked in 2014 Lennie fell with him.

They featured for both clubs

Ernie Forrest
Having played for Bolton against Town in 1947-48, Ernie Forrest joined Grimsby for £5,000 in the summer of 1948. His career had been ruined by the war but at Bolton he was a hard-working, tenacious wing-half. He played the same role at Blundell Park but was also used as a centre-half, where the spring in his leap to head the ball away compensated for his lack of height at 5 foot 8 inches.

Teetotal and supremely fit, Ernie was a showman. Nat Lofthouse described him as "the life and soul of the team. I've never seen a happier guy". A dressing-room tale is that he was once so incensed about the way Town were playing that he allegedly threw his half-time tea in the direction of the manager. He was loved by the crowd. Why did he leave after less than 12 months at our club?

Jimmy Hernon
Jimmy Hernon was persuaded by Bill Shankly to join Grimsby Town from Bolton for £10,000 in September 1951. Physically fragile, Jimmy was a magnificent reader of a game, had a keen positional sense, was an artist with the ball at his feet and worked wonders in the Shankly team that was so close to promotion in 1951-52.

Enzo Gambaro
In 1996, Enzo Gambaro had trials at both Bolton and Grimsby. After three reserve team appearances for Bolton, the Ivano Bonetti-connected veteran made a substitute appearance for the Mariners with 23 minutes remaining at Leicester. He returned to Italy without a contract.

George Higgins
George Higgins played for Bolton in the mid-fifties but left them to play at full-back for the Mariners. He featured in the oft-recalled FA Cup tie with Wolves on 8 January 1955. Town were two goals up when Higgins disputed the decision to award Wolves a corner. Wolves scored from it and went on to win 5-2. After one full season George left to serve his managerial apprenticeship at Scarborough, but he did return to Blundell Park as assistant trainer, then trainer and as a temporary manager.

Dean Crombie, David Felgate and Gary Henshaw
Town defender Dean Crombie played 316 matches for Grimsby. Goalkeeper Dave Felgate was in direct competition with Nigel Batch for the number 1 jersey at Blundell Park. He lost that battle – to the delight of Bolton, where he made 238 appearances. Gary Henshaw made 46 appearances for Town and left after the 1987 relegation debacle, playing 70 times for Bolton before settling at Hyde United. Crombie, Felgate and Henshaw all played in the same Bolton side under manager Phil Neal.

Nicky Southall
The most recent Town old boy to succeed at Bolton, after being with Town and then Gillingham, was Nicky Southall. He played for Bolton in the top flight. His speed and crossing ability had made him a favourite at Blundell Park.

Charlie Wright
After 129 appearances for Town in the mid-sixties, and a five-year spell at Charlton, the superb goalkeeper Charlie Wright ended his career with Bolton, helping them to the third division title in 1972-73. After that he became a respected coach. He managed York City and then Bolton. Although his stay at Burnden Park was short-lived, he brought Sam Allardyce back to the club together with Sam's Terrier colleague Dave Sutton, David Cross from West Brom and Asa Hartford.

Send us your feedback