Omar Bogle is still banging in goals, scaring defences witless and attracting derisory offers from Barnet, so let's do the club a favour and stick a zero on his price tag by illustrating his prowess with some graphs.

At the end of September I had a look at Omar Bogle's start to the season and compared his goals per game with some of Town's all-time top strikers, as well as with more recent hotshots, including himself in 2015-16.

If you didn't see it, take a look at who I picked and how they compared. That was after 10 league games. Now, after 22 matches, it's time to crank up the spreadsheet and see how he has progressed.

A lot has happened in the last three months. We've seen Paul Hurst depart and Marcus Bignot arrive; Town have played the top teams in the league and Omar has picked up a thigh injury, missing a chance to score.

But, as per the previous instalment, we are dealing in cold, hard stats because that's all that we'll remember and it's all that really counts. Nobody will look back and say: "If only he'd not had a gammy leg for the trip to Donny…"

Just like the Omar of 2015-16, this year's model started off at a fair lick before getting stuck after 10 games. But then came Bignot, the Barnet game and a return to goalscoring form.

Omar's strike partner last year, Monkey Hanger Pádraig Amond, was behind Bogle's current total at this point last year but really stepped on the gas in the new year. 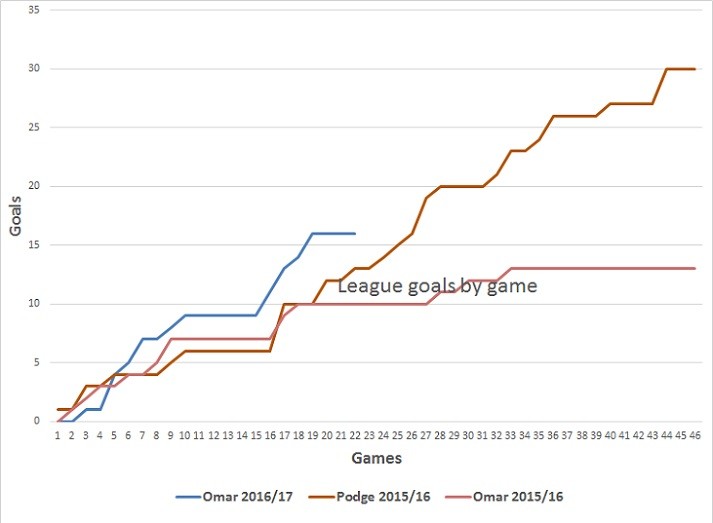 Of our recent top scorers, only Alan Connell in 2010-11 had hit as many as Bogle before Christmas, going on to record 25 for the season. 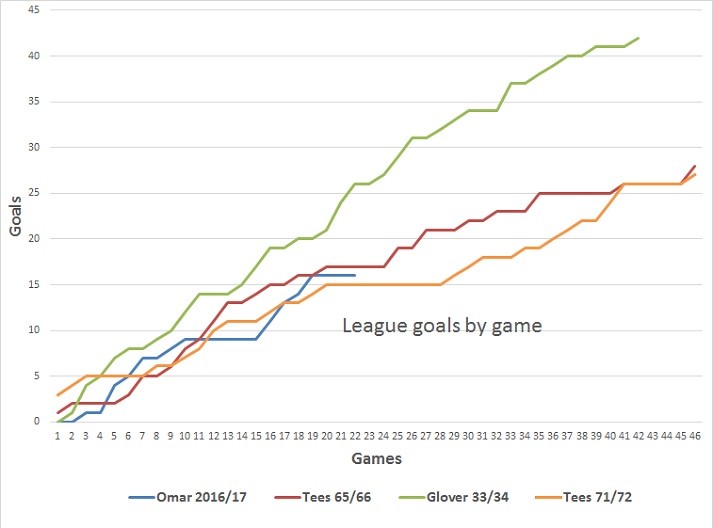 By this point in the season, Glover had racked up 26 goals, including a hat-trick on Christmas day and a brace on boxing day, both games against Manchester United. That season, Division Two was composed of 22 teams, which means Glover had four fewer league games to play in – so his final total, averaging out to exactly a goal per game, is all the more remarkable.

We'll revisit this in another 10 or so games, if of course Bogle is still with us and we haven't cashed in and flogged him to Peterborough.

Drop us a line and let us know if we should compare him with anyone else, past or present, or if you think a pie chart might add anything.