"It didn't have to be perfect": Podge's Braintree penalty

The consequences of him missing his penalty would have been sickening, but Pádraig Amond kept his wits about him

You remember - you will never forget. It's goalless in the play-off semi-final second leg at Braintree, and Grimsby are 1-0 down from the first leg. As things stand with 16 minutes to play, Operation Promotion is a failure. Then the referee awarded a penalty and Pádraig Amond scores.

As Podge started his run-up for the penalty, it was too much for me - I think I nearly blacked out. It wasn't the consequences of him scoring, but missing, that were the problem. Your life would never be quite the same had that happened – and the next hundred years of Grimsby Town's history may have foundered in those two seconds. And a dodgy, scuffed old penalty it was too, but the keeper obliged us by flopping gently the wrong way. Oh… my… God.

But Podge himself, who got in touch after reading Ron Counte's article, has a different memory.

"I've never thought of the penalty that way. I will let you in on a little secret. I don't think many people know this, except I told Danny Cowley [the then-Braintree manager] when I met him at the player of the year awards. I knew I couldn't miss the penalty; there was never a hope of it because of their goalkeeper coach. 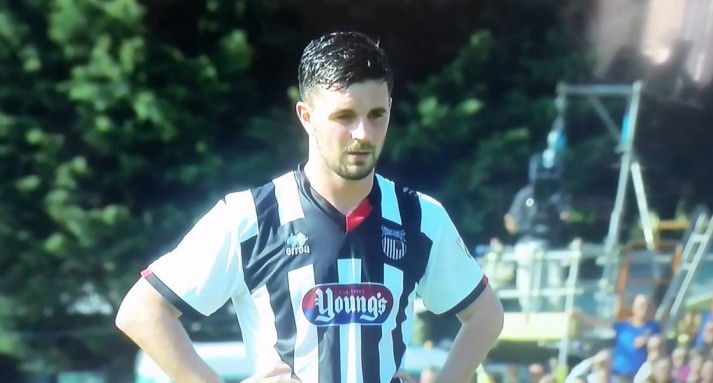 When the penalty was given, he ran around to their goalkeeper as I had the ball in my hands. When all the commotion was happening about 'is it or is it not a penalty?' he had a piece of paper in his hand and was showing the keeper where I put all my previous penalties. They were all the same direction, the opposite of where I went. So because I saw him show the keeper I already knew the goalie was diving that way and only way I'd miss was going over the bar or wide.

While that little drama was being played out, Town fans, feet from the pitch behind the goal into which Podge would take his shot, were in meltdown, pleading with him to score. Even some of his team-mates could not watch: players like Toto, head in hands, and Jamie Mack, poised on his haunches. Amond was fully aware of the importance of the moment.

"Oh, I knew it was a big penalty and my heart was beating very fast. But I was confident because I knew where the keeper was going. I knew anything from the middle of the goal to the left was a goal and I just wanted to keep it away from the keeper's legs and not to close to the post either.

It didn't have to be the perfect penalty. It just had to be on target."

You and me would scarcely have been able to put the ball on the spot, never mind kick it towards goal, still less take note of that scene between the Braintree keeper and his coach.

We want and need the focal points of the emotional storm of a high-pressure game to operate on a different level. Professional athletes see things amid the noise and the tension that we miss. That day, to our everlasting gratitude, Podge was keeping his wits about him.

Our huge thanks to Podge, not only for scoring that goal, but for getting in touch and giving us permission to share his story.