The night the crowd changed ends 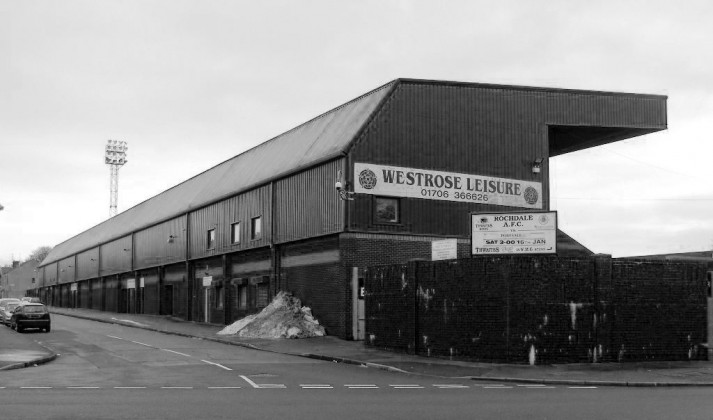 After a lifetime of watching Grimsby Town most of us have become accustomed to viewing gob-smacking absurdities on the pitch. We've witnessed goalkeepers so shaky that every back-pass was a potential own goal. We've seen defenders whose idea of playing the ball out of defence is a 90-yard toe-poke. We've endured strikers whose efforts on goal incur a severe risk of injury to anyone sitting in the top row of the Pontoon. And we've seen midfield players whose long balls were normally a brutal punt which would comfortably clear the stands, to the delight of local urchins patrolling the streets outside the ground in the hope adding new match balls to their collection.

But all of this is pretty standard fare, because in the lower reaches of the football pyramid in which the club has found itself in recent years, many of our signings have been from that peculiar breed of deficient physical specimens occasionally to be found masquerading rather unconvincingly as footballers. Often doing their best to avoid the ball altogether, these pathetic refugees from numerous reserve teams spend their careers trying to close their ears to the torrent of abuse from the stands and the frustrated moans of their befuddled team-mates.

But on occasion we are also exposed to some bizarre events off the pitch. One memorable example occurred on a freezing Tuesday night in March 1979.

I was a student in Bradford and had accepted an invitation to a party in Manchester which happily coincided with a Town match at Rochdale that same evening. Accordingly, I managed to drag a couple of my unsuspecting flatmates to the inglorious footballing hovel known as Spotland for their first taste of GTFC martyrdom.

The game was a curious affair, with Rochdale taking an early lead but the mighty Mariners, fielding arguably the best post-war team we have yet produced, quickly turning things round. Comprising, as it did, such legends as Joe Waters, Tony Ford and Mike Brolly, that side was irresistible going forward. It would go on to achieve double promotion and then comfortably survive for several years in the second division. But on this bitterly cold night on the exposed stone steps of what passed for the away end at Spotland, it was a test of even the most ardent fan to endure conditions which Captain Oates would have balked at.

At half time somebody said it was possible to transfer into the covered stand which ran along the east side of the pitch. When I say 'stand', you will understand that this was basically a repurposed cowshed parked rather unsteadily on yet more rows of empty frozen concrete steps. In order to gain access to this luxurious enclosure one had to pay 10p to a somewhat scruffy gentleman glumly patrolling a tiny gate, in return for which he handed out a cloakroom ticket as evidence of payment. Pretty soon word spread and the couple of hundred or so brave souls who had made the trek to Rochdale quickly surged forth to seek refuge from the elements, overpowering the hapless steward.

In the space of five minutes, the entire crowd had completely changed ends. When the players came out for the second half we could see their rather startled expressions

Of course we wanted to get as near as possible to the end the Mariners would be attacking in the second half. So we ploughed en masse down to the opposite end of the ground. At this point the home supporters, viewing what must have appeared like the charge of the Light Brigade hurtling towards them, decided that discretion was the better part of valour, abandoned the terracing behind the goal, and scrambled into the stand on the west side of the ground.

Finding the home end now totally deserted, our fans continued onwards and populated it. Completing the circuit, the home fans – now displaced from their natural habitat – proceeded to file into the barren wastes of the away end. Thus, in the space of five minutes, the entire crowd had completely changed ends. When the players came out for the second half we could see their rather startled expressions as they realised what had transpired.

The Mariners ran out 5-2 winners of that game but my abiding memory is of the comical crowd movements and the players' bemused reaction. Almost 30 years later, at the We are Town book launch, I had the pleasure of talking to Tony Ford about that game. He of course remembered it, and also told me about another game at Spotland where the club inexplicably changed balls at half time. Having started with a white ball in the first half, the second half was played with an orange ball for some reason.

I guess the truth is that one never knows what to expect at half time at Spotland.

Photo credits: this page cc-by-sa/2.0 © David Dixon geograph.org.uk/p/1669747; home page from a video of Spotland 1979, used here with the kind permission of the Football Ground Guide