As in previous seasons, the Mariners didn't start selling their season tickets until the first week of June. Is the club missing a trick here, or doesn't it matter?

All good things come to those who wait: a decent pint of Guinness, and now Grimsby Town season tickets too. Town arrived late to the ticket selling party but are they out on a limb or hanging out in the kitchen like the cool kid in school?

Yes, we always leave it late but is that a good idea? Why had all of our fourth-flight peers started selling before us, and some – such as Chesterfield, although they were still in the third division then – as early as February?

To the marketing novice, you'd expect that if one has a lot of a thing to sell then the earlier one starts selling it, the more one might shift. It's not as if Blundell Park is over-subscribed, is it? We're not Arsenal, with thousands of fans on a waiting list for season tickets.

So, what's happening? When you compare our season ticket prices with other fourth division clubs (see the appendix below) it turns out our prices are not too expensive; we have nothing to be ashamed of. So why do we wait so long to start selling our season tickets?

Tax efficiency
It's been suggested that this is for tax reasons. This season we have made a substantial profit due to the sale of Omar Bogle and an increase on last season's gates. Because of this, some say, 2017-18 season tickets can't be sold in the 2016-17 financial year – the club's financial year runs from 1 June – or the club would be facing a larger tax on its operating profits.

Does this make sense though? The games take place in 2017-18 and therefore the revenues from 2017-18 tickets can surely be posted in the same financial year, even if sales were started towards the end of the previous year, and that would be perfectly acceptable to HMRC. It's just accounting. It can be done.

Here's something else to think about. If we are worried about having made too much money in one year and might have to pay tax on our profits, then why not offset this profit against some of our debts?

The more one thinks about this, the more one might wonder why we prefer to run at a slight loss each year and to carry a debt. But that's another article.

This is interesting, but surely if one is always going to be buying a season ticket, then when one pays is just an (personal) accounting decision, in some ways like the club's accounting periods and decisions when to post income and outgoings.

Even if all existing season ticket holders decided not to purchase until June or July, after the season ended, wouldn't launching the tickets early with an early bird incentive entice new supporters or occasional fans who might not have previously considered a season ticket? All but five other clubs in our division seem to think so.

It's the way we've always done it
One of the club's employees posted on a popular Facebook group that our season tickets have always gone on sale in June after our year end. This is in line with the notes above on tax in the current year.

It was also stated that having looked at the ten previous years' patterns of sales, last year's £100,000 take in the first week was a one-off (due to the efforts of Paul Savage and the Mariners Trust's #Operation3k). After that, sales dropped off until July because folks don't want to pay early for something they won't need until August.

Now, this argument is one that is really difficult to understand. If folks don't want to pay up front for something they don't need yet, then why do we have season tickets at all? Half the tickets aren't needed until after bloody Christmas!

It was also suggested that next year the club might try putting them on sale in March or April, as fans have asked, but this was tried in 2002 and fans weren't happy to shell out until the shape of the new squad was known.

Why the fuss?
So what's all the fuss about? Why should we be bothered about whether the club sell early or late? We'll still be kicking off in August and we'll still be there, right? 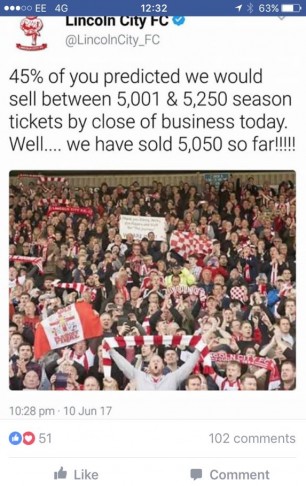 Is there any benefit in selling early, as most of our rivals seem to think? Right now, Russell Slade is assembling his squad for the coming campaign and will be working within a budget, but how is his budget set?

One has to presume it's based on last year's finances and, without the trust's push of last year, a prediction of 2,600 sales. Probably better to err on the side of caution, though, and adjust those sales down, as the 2015-16 figures were likely buoyed by the buzz around #OperationPromotion (another fan-driven exercise).

Take a look at our friends down the A46 (other routes are available). Make sure you're sitting down. Lincoln announced on 10 June, five days after we put ours on sale, that they had sold over 5,000 season tickets.

That, on top of their bumper gates as they raced to promotion, plus money from their FA Cup run, will likely see the Imps with a transfer budget far in excess of Town's. Are we happy with that? Another of our rivals stealing a march on us?

Complacency
So why do we sell late? Why aren't we trying to sell early? And more importantly, why aren't we aiming to increase sales? It looks like complacency, plain and simple. It looks like the club takes it for granted that the folks that bought season tickets last season will be renewing next.

Can we be certain though? A quick glance at gates over the season and average attendances over past seasons show that while there is an upward trend, they can drop and drop hard when things don't go to plan.

That could happen to Lincoln too, you might say, but at least they're trying! And by trying perhaps they are getting themselves to a position where they might be less affected by a slump in form and associated drop in attendances.

But it doesn't make sense, does it? It doesn't make sense that the club is happy with the current level of support. The club is making the case for and progressing a scheme to develop a stadium with twice the capacity of Blundell Park. If we are to avoid the chants of "shit ground, no fans" when we eventually move to a new stadium, don't we need to be building support now? Or are there four to five thousand fans sat at home on a Saturday, shouting for the Mariners but staying away because the floodlights haven't been painted for a while, or there isn't an ice rink within walking distance of the turnstile?

Appendix: How we compare

Let's have look at how Town's tickets compare with the rest of the teams in the league. 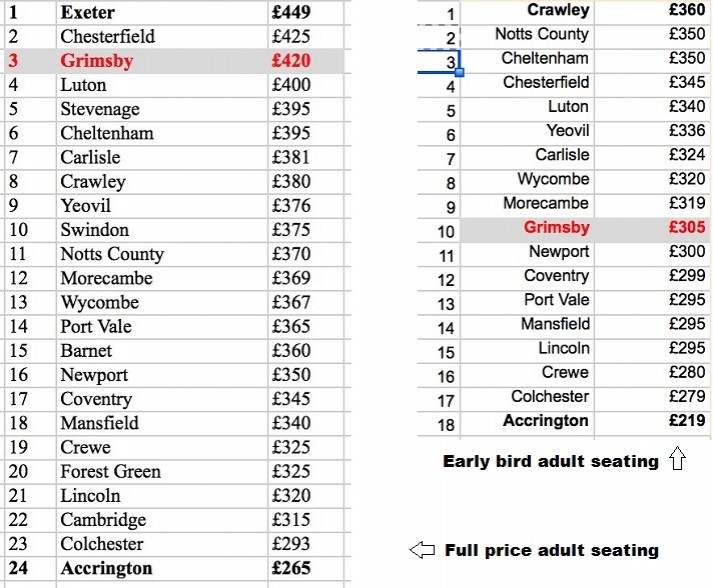 Town have the third most expensive full-price adult season ticket in our division, so it's a good job our early bird scheme is very generous. With the discount Town's top-selling ticket comes in at £6 more than Coventry's, but well below those of Notts County and Chesterfield.

Note that not all clubs offer early bird schemes, and in Exeter's case, due to ground redevelopment, seating will be limited during the season.

It's interesting to note that the worst-supported team in the league – Accrington – have the cheapest standing and seating season tickets. 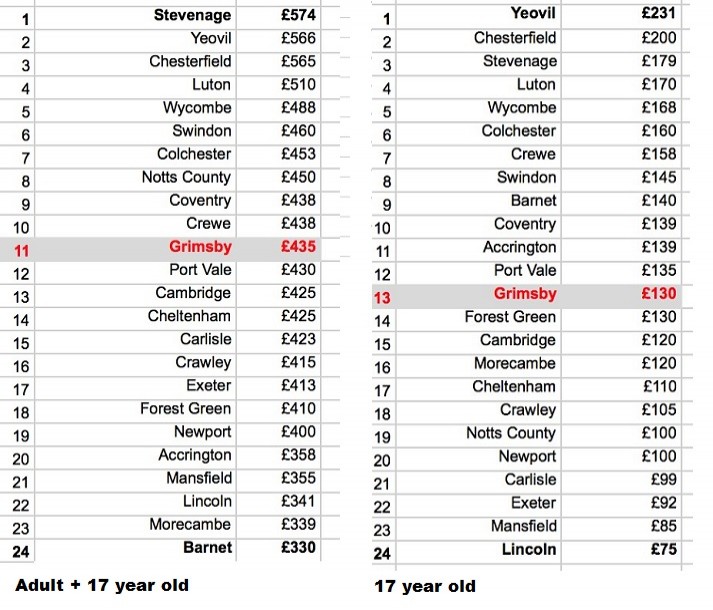 If you're a lad or lass who takes a standard oldie with them to Blundell Park, it still looks pretty decent value but this is where our neighbours down the road win hands-down. A 17-year-old Imps fan can watch each game for £3.23 but Town's is double that. We're not the worst by any means; if you're a Yeovil or Chesterfield yoof, you might be better off finding a new hobby. 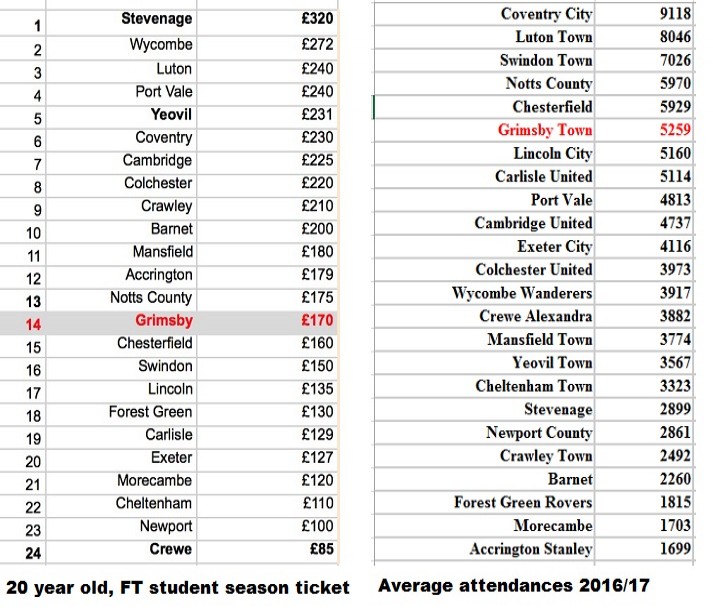 There are massive variations in how fourth division clubs treat students, with Crewe winning easily while Stevenage and Wycombe charge four times as much. Full-time Mariners students won't be too unhappy but it could probably bear reducing further.

The final table is last year's average attendances for this year's fourth-flight clubs.

There's no clear correlation between pricing and attendances. But there's no escaping the fact that there are empty seats at Blundell Park – and there would be a positive impact if they were full, even if prices were reduced to achieve this.