So comrades come rally, for this is the time and place. The football ideal unites the human race.

A slate grey evening in the green, green grass of my old home. The old ground just doesn't look the same as I step over where I know there is a drain. And there to meet me is a woman with a bucket and 161 actual human boycotters. There's something energising about collective action in real time, with real people really doing this thing. We're keeping football real.

Oi, when did they plant those trees? They weren't here in 1979. They've paved a pea field and put up a country club. The hoity-toity Humberston Avenue set know the price of everything and the value of nothing.

This Town lined up in a 4-4-2 formation as follows: Groves, Chamberlain, Pitts, Brett, Cook, Nuttall, Dellow, Hayworth, Young, Harris and Hutson. The substitutes were Grice, Sawyer, Fanthorpe, Frary and Precious. Good lads! Back to basics, back to reality: 4-4-2. Keep it tight, keep us shape and keep it on the floor. Fasten your bootlaces, you're going to be in for a bumpy pitch.

Breathe, breathe in the air, don't be afraid to care about football. This is good ol' football, with good ol' boys, never meaning no harm. 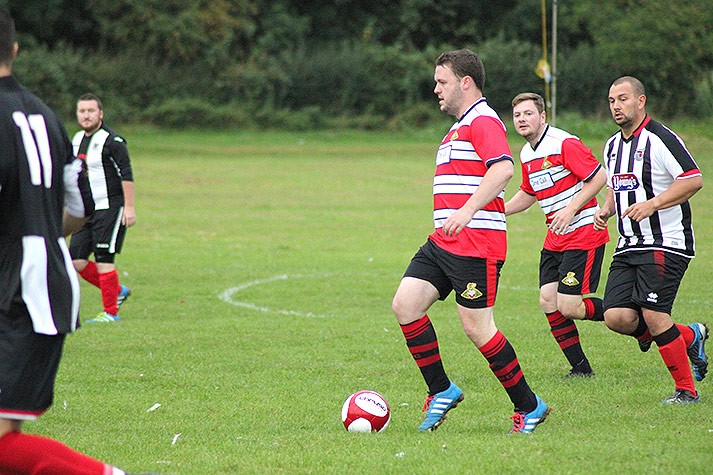 First half: I saw the light

Town kicked off towards our old bungalow.

Passing! Movement! Big blokes in big shorts, short blokes in short shorts. Jinking Josh danced through Donny, but the Donny duvet smothered. Long shots rolled through the newly mown grassland. The monochromers flowed forward, but foundered on the centre-back, a Jones the Stickite with real hair. Or possibly it was the Rob Jones with a toupee. He must have gone to Morrie's Wigs – they don't come off, even under water.

Slowly, slowly the flow ebbed and the Yorkites' subtle plans to hit the big man wore down the slender stripes. Well, mostly slender. Town had a balanced diet on show; Yorkshire had more meat. And here he comes, running down the street, getting the funniest looks from everyone he beats. It's the Pasty Beast, the Yorkshire Akinfenwa, steamrolling, spinning and spooning over the bar.

Passing, movement, it's football just as we once knew it, Jim. On the floor, foot to foot, with dribbling, with shooting, with a dog on the pitch and a fish on the line. 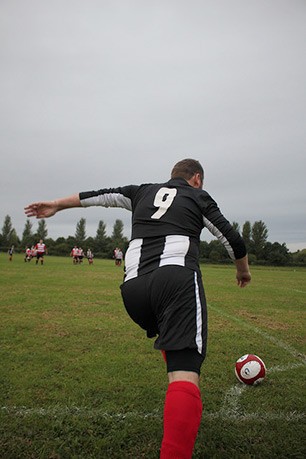 Flying winging, persistent plucking and number 88 screw-cut as the keeper finely flipped aside. Jinking Josh flicked the final corner over the bar. It's time for a change: on came five guys named Joe and the bearded bulldozer side-footed wide after Mariner magnificence, a passing beauty.

Beware the Pasty Beast, hanging on the shoulders of giants, slipping free, lobbing the diminutive Town keeper as balls were cleared off lines via knees and invisible arms. A pokey-lob kissed off the top of the bar. He's free as a bird, flying goalwards. The Pasty Beast was swallowed by the fleet-footed flippers, a save of real excellence. Well done lad, that was cracking.

Have you seen your mother standing in the shadows? Four CSI lights flickered on in the corners. Hey, the crime scene is four miles away.

As the darkness descended Donny launched war rocket Ajax. Over the top and the big man lobbed the advancing keeper. The ball bounced up and down off the underside of the crossbar and Big Dave McDonald volleyed into the empty net from five or six yards.

Time for a break, time for a cat-nap. C'mon, Sort It Biglinssesseesss.

Changes were made at half time, but who, what and where? A substitute replaced a substitute. He looked pretty tall, but maybe his heels were high. Can you see through the gathering gloom? Tackles were crunched, shoulders were barged, bodies collided, but this Town has discipline. Red hooped breaks and black striped slides. Shots sliced, shots scooped. Can we put a bell in the ball?

Hello darkness my old friend, Mum always said you've got to come in when you can't see the ball. Come in lads, our time is up. The good deed is done.

Who cares about the score? The fact that it happened is enough. We stood tall, proud, and together. Though cowards flinch and traitors sneer, we kept the flag of football flying here.

And now for the raffle.

Cod Almighty man of the match

What an extremely sensible chap. He let the game, and the love, flow, playing advantage with aplomb and managing the match through his little chats. Better than most of these professional pillocks in pastel: 8.639. Even the linesmen kept up with play and didn't get anything wrong.

A slightly unbalanced squad, but with positive intent and a strong urge to fly down the wings. And pass the ball to each other. It was like watching a football team. And they played 4-4-2. You can't go wrong with that.

Old heads and talking heads in defence, twinkle-toed tyros in midfield and willing workers upfront. You can't say all of that about the ‘real' Town these days.

Biglin at 25/1 to replace Ropey Russ.

Had just a couple of stronger players more than Town and used their general bulk to good effect. The Pasty Beast was big but not bad, having a certain deftness and twinkle in his toes, while the long and winding centre-back led Town's strikers to the door. Well organised and effective, much like the professional version.

We came, we stood in a field, we made our point.

Hustling and hassling, chipping and chasing, lobbing and dobbing. A lightness of touch and darkness fell.

In a word: honour 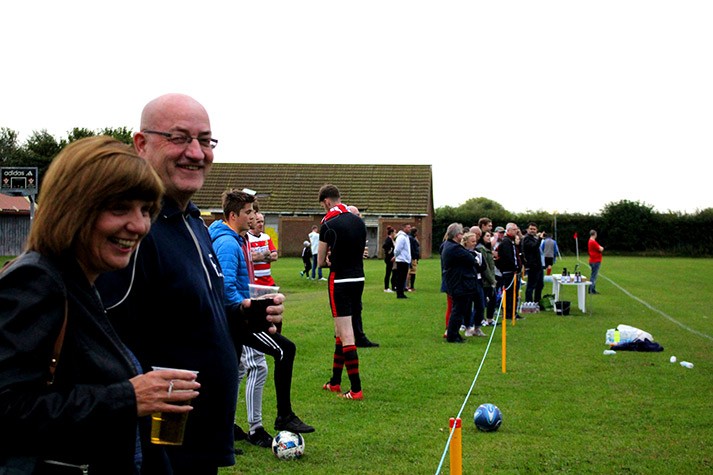