Warning or promise, depending on your perspective: this match report will contain very little of the "on 73 minutes Town won a throw-in on the Exeter right about level with the penalty area" type stuff. I lived through the game once (barely) and you can be thankful I will not attempt to put you through it.

Exeter make you feel welcome before you even cross the Devon border. Through our SLO Kris Green, they had kindly invited Town fans to tour St James Park on the morning of Saturday's game. Rich, Scott and I accepted the invitation with reassurances that the club bars were included and there would be a free badge at the end. A short walk from the town centre, the ground is hemmed in on all sides by residential streets. Faced with having to make improvements, they've chosen to redevelop rather than move. The away end has already been flattened and their glorious old grandstand is out of commission too. The asbestos roof has been safely removed and the structure has a sad skeletal look for its final days. Reduce, reuse, recycle. The new away end will be a stand bought from Barnet; their old North Stand, site of course of the infamous shark attack. Regardless, I wouldn't want to get stuck in traffic behind it when they bring it down. 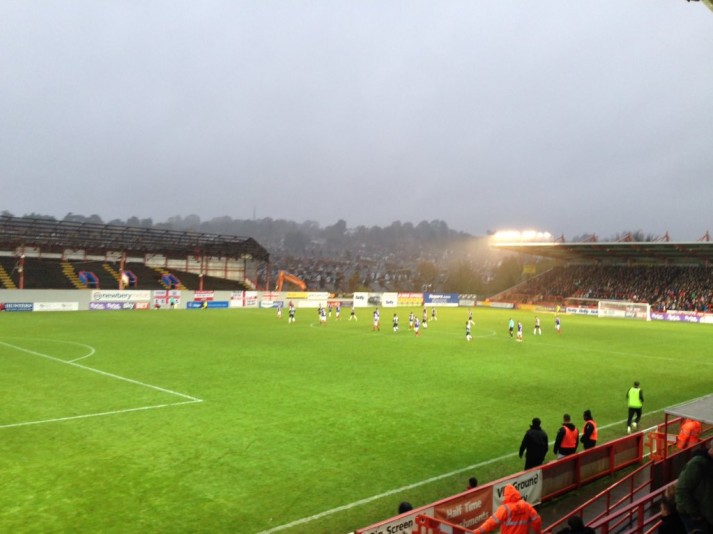 Exeter haven't had much glory down the years, as a trophy case that is even smaller than ours testifies. Padding it out with FA fairplay plaques is nothing to be embarrassed about lads; we've got a stuffed puffin in ours. However they are proud of their history and make the most of it. The tour was really good fun with Dave and Dave from the Exeter trust great hosts. Fan ownership has clearly re-energised a once-dying club. The enthusiasm of the Daves was quite inspiring with lots of good ideas that we could take home, notably a kids area to encourage families to get down to games.

The Town tuck trolley was wheeled into the dressing room as we neared the end of the tour. Green bananas, the horror! Worse still, Tesco brand jaffa cakes. FFS. Indigestion from unripe fruit is one thing but Town taking the cheap option on biscuit-sized cakes is poor form. Maybe Russ is planning on splashing out on a striker that scores with the savings?

The trust bars were ace with great beer and pies. Trains, planes and automobiles brought together old friends and some new. Plus a fresh-faced set from the south west corner of the country. After Plymouth last week, they were feeling like regulars again. The Exeter fans there were a thoroughly lovely lot. By the time we'd got to 3pm, the consensus was that we couldn't lose to a nicer bunch of people.

Ah, three o'clock. Let the record state that 255 fans assembled of their own free will. Not one was surprised to see an unchanged line up of McKeown, Davies, Collins, Clarke (c), Dixon, Berrett, Summerfield, Woolford, Jones, Dembele and Vernon. The subs were Killip, K. Osborne, M. Rose, Jaiyesimi, Mills, Hooper, and Matt. There must be some benefit to an unchanged line up, right? Even if you don't agree with every selection or position. If Slade has a plan, some type of natural evolution means we must be improving. We might only have enough money to assemble a Lada but at least it will be reliable, right?

Oh look, we're playing in our home shirt. FACT: Exeter and FlyBe have the longest club sponsor relationship in the top four divisions. Beating only our relationship with Youngs by a season or two. They obviously get on well because they lined out in their third kit to promote the airline's new purple livery. Just when we were falling in love with fan ownership, eh? They also took the S*n's filthy lucre when they played Manchester United in the FA Cup in 2005 (no points for guessing who they beat in the first round en route to Old Trafford, by the way). Bizarrely a S*n sponsored boot is on display in one of the bars. Do yourselves a favour and stick it in the skip with the builders rubble.

The game kicked off in conditions that in Ireland is called a soft day. That persistent drizzle where it's never actually raining but drenches you all the same. Thankfully, the ground redevelopment meant Town fans were under cover. You want me to get to the football? There was none. Not from Town, and not much from Exeter either. The pitch was in excellent condition and slick with the rain but neither side was good enough to show off their passing on it.

For 40 minutes, Town didn't play football. Before you say it, they didn't hoof it either. It was non-football from some other yet to be discovered dimension. It's not even the one we sent Mick Lyons back to. 11 men stood and kicked the ball when it came near them. Somehow we managed to play almost an entire half without having possession of the ball in the opposition penalty area. I don't think I've ever seen this at any level of football. Short of a couple of goal kicks the ball may not have even been in there at all.

By that 40-minute mark, we were one down. As I said, Exeter didn't look any great shakes either but they did have players who moved off the ball and made space for team mates. This is what happened on 29 minutes. Our defence was static as Exeter took a free quickly. The were still static approxmately four seconds later when the ball was whipped in for Stockley to finish from a few yards out. There goes the 0-0.

Just before half time, Woolford put over a cross that almost got us level. Jones rose and planted a header just too close to the keeper, who made a decent save nonetheless. Apart from that it was the most unacceptable 45 minutes I've ever seen from a Town side. People will point to other games and bigger deficits but the complete lack of ambition or enterprise was utterly, utterly depressing.

Second half - as good as it got

The second half kicked off and, as always, you try to convince yourself that Town were saving the best attacks for the goal in front of their fans. For a minute and a half things were better. We strung seven passes together. Scott counts such things. He would also like to point out that he had a ticket but as he had pre-game Armistice duties, he was not clicked in via a turnstile. This means the actual Town number was 255 not 254 as officially released. Oh yes. The seven passes came to nowt. And that is about as good as it got for the rest of the game. I'm not joking, the Exeter keeper's shirt and shorts were spotless at the end.

On 55 minutes a Town 'attack' broke down well shy of seven passes. Where's Dixon? A quick punt from Exeter into the space where you might find a left-back instead found McAlinden who cut in for a left footed curler into the top corner. Game over and we all knew it. 2-0 down and Town still played like they were holding out for a 0-0. At some point afterwards Dixon clattered someone late. He might just have been arriving to intercept that punt for the second goal, who knows. He received a yellow card and was subbed to avoid further embarrassment and another yellow.

DJ came on for Woolford and did get near the byline a few times. A couple of corners and some good defending from Exeter were all that ensued. Not an 'ooh' or an 'aah' to be had. A hollow "Marinnnerrrrrrs" to greet the corner kicks, not a song sung. Matches trying to figure out whether it was La Bamba or Twist and Shout used for the Bolarinwa, Bogle and Disley song seemed like a long time ago. Not even the Dembele song got an airing. It's no point giving him the ball on halfway and equally pointless him trying his tricks there. He really struggled and made no impact at all until DJ came on when he at least completed some passes.

Towards the end, Scott had taken to counting the houses on the hill overlooking the ground. He'd reached 157 when a dangerous-looking pass from James Berrett brought him back to us. Dangerous in that it pinged into the seats below us. This moment illustrated one of our problems. Berrett had found some space around the halfway line and looked up to play a ball to a runner in the channel or left corner. Except there was no runner and no movement. DJ eventually twigged Berrett's look and made a belated run. Unfortunately half the defence had seen the look too and tracked the run. The other half converged on Berrett who, under pressure, thwacked a rushed ball into the crowd.

The whistle went and the players were quickly over to applaud the travelling Mariners, most of whom replied in kind. It wasn't as if they looked like they weren't trying. Well apart from one comical moment when Matt did a strange half-hearted jump in acres of space but nowhere near the ball. They're either not good enough or playing in a system that makes them look like a bunch of old duffers.

I was left wondering why the team had bothered turning up. Why travel across the country for an overnight stay with your bananas and jaffa cakes just to play like that? We should just have given Exeter a walkover. There's a line from Red Dwarf that rehashes an old proverb: "It's better to live one hour as a tiger than an entire lifetime as a worm." Arnold 'Smeghead' Rimmer replies with a proverb of his own, "Whoever heard of a worm-skin rug?". Don't be a smeghead Russ. I normally cringe when I hear that phrase that 'the fans deserve better'. In this case I make an exception.

This division is useless. It's the only reason we are four points from the play-offs and is the only chance we have of avoiding a return to the Conference. Don't blame Russ and the players. Well maybe a little. Russ assembled this squad and is picking the same eleven each week. We can't cling to the first half performance at Cheltenham forever. However their failings are just the symptoms. Blame the board and ownership. This club on its current course is doomed. Maybe not this season but soon. We've learnt nothing. Worse, Wembley 2016 has upgraded the blinding arrogance within the club. We've had the dead cat bounce of promotion, now we're just going to rot. The only thing we can take from defeats like this is that Exeter were once in a similar bind.

Man of the match? Who made the most effort, who was the most defiant struggler against the strait jacket of formation and tactics? I dunno, Summerfield probably. In fact no, Mitch Rose interrupted his warm-up in a vain wait for a nod from Russ to pose with a couple of young Town fans. The smiles on their faces were the biggest I saw all day. The smiles were for the pic with Mitch of course, it was incidental that they had their back to the pitch and the game at the time.