It is 60 years since one of Grimsby's most skilful players made club history. In part one of the Johnny Scott story, Andy Freeman tells the tale of how a Busby Babe became a Blundell Park hero.

If there's any career in football that shows how fickle the footballing gods can be it's surely that of Northern Ireland's Johnny Scott.

Scott played 265 Football League and FA Cup games for Manchester United, Grimsby Town and York City, scoring 54 goals, and then made 95 appearances for Southern League outfit Margate, scoring 26. He also gained two truly memorable full international caps for Northern Ireland; he remains the only Mariner to have played in the World Cup finals, 60 years ago when the tournament was held in Sweden.

With the approach of Russia 2018 it’s time to remember this former winger, who many consider to have been the most skilful footballer ever to play at Blundell Park.

Born in east Belfast in December 1933, Johnny Scott grew up in a war-ravaged city. The 'Belfast Blitz' of April/May 1941 saw the worst air raids on any city outside London, with over 900 people killed and 1,500 injured. Ominously, very few children had been successfully evacuated, and more than 55,000 houses were damaged.

Playing football must have been a release from some terrible memories for the teenage Johnny Scott. He came to the attention of super-scout Bob Bishop while starring for youth teams Boyland FC and Ormond Star and signed for Matt Busby’s Manchester United in October 1951.

Training with the Busby Babes

The young Northern Irishman was part of a thrilling time at Old Trafford as Busby was creating the first of his legendary United sides who would win Football League titles in seasons 1955-56 and 1956-57. Later Busby would rebuild a new team and take further titles in 1964-65 and 1966-67 as well as the European Cup in 1968.
Johnny Scott must have felt privileged to train, play and socialise with the likes of Duncan Edwards, David Pegg, Bobby Charlton, Eddie Colman, Bill Foulkes and a host of other precociously talented 'Busby Babes'.

But it must also have been incredibly frustrating for a talented player, in the days of no substitutions and no squad rotation, to have to wait patiently for a first-team game behind the likes of England internationals David Pegg and especially Johnny Berry – who made the number 7 right wing spot his own.

Footage of Berry in action suggests that the tricky two-footed winger stands comparison with the likes of other staples of United sides: George Best, Gordon Hill, Willy Morgan and Ryan Giggs. Amazingly, he collected only four international caps, himself being overshadowed by Stanley Matthews and Tom Finney, but played 276 times for United between September 1951 and February 1958.

As a result of Berry’s abilities, Scott eventually only played three times for the Manchester United first team. He played two games in October 1952, against Wolves at Molineux in front of a crowd of 28,000 and against Stoke City at Old Trafford. His last game came three frustrating years later in a 3-1 defeat at Deepdale against Preston North End.

Just look at the team he played with in that game: it included Roger Byrne, Bill Foulkes, Mark Jones, Eddie Colman, Duncan Edwards, Dave Pegg, Dennis Viollet and fellow Northern Irishman, Liam Whelan. To be good enough to play on the same team as these legendary players! What would the average footballer give to be thought that good?

But could someone with a crystal ball that night in Preston have predicted that two years later five of that team would be dead in the infamous Munich air crash of February 1958? Or perhaps just as cruelly, that Johnny Berry would survive the crash but was so badly injured he would never play again?

Later that year, in June 1956, the 22-year-old Johnny Scott and Manchester United parted company and he signed for recently promoted Division Two (second flight) side Grimsby Town. The Town player/manager Allenby Chilton had played in the same United side as Johnny Scott and obviously knew what a talented footballer he was signing. 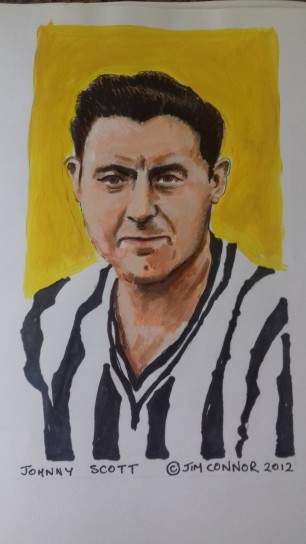 And so on 25 August 1956, in a 2-1 home victory over Notts County, Johnny Scott’s Grimsby Town career began with him scoring the winner. He went on to play 241 times for the Mariners over the next six and a half years and scored 51 goals, becoming a real fans’ favourite and cementing his reputation as one of the best ever players to pull on the black and white stripes.

His Town career began with two mid-table Division Two finishes and then an unfortunate relegation in 1958-59. The team just missed out on promotion from Division Three in 1959-60 and 1960-61 – but then the fabulous 1961-1962 promotion side with a spine of Don Donovan, Keith Jobling, Ron Cockerill, Mike Cullen, Scott himself and Ron Rafferty gained promotion on the last match of the season.

The team photographs of the years 1956 to 1962 show a team and a game in transition from thick cotton shirts with collars, lengthy shorts and industrial-sized shin pads and boots to lightweight shirts, brief shorts and insubstantial boots. The 23-year-old Scott turns into a 29-year-old man but he still has that recognisable shy, modest smile.

Many Mariners’ fans of a certain age still go rather misty-eyed at the mention of a footballer who was fast and two-footed, controlled the ball exquisitely, could cross with pinpoint accuracy, play anywhere in the forward line, and score goals – and was a deadly penalty taker.

Nobody kept a record of 'assists' in those days but 'Blundell's' reports in the Sports Telegraph of the matches Johnny Scott played in are peppered with "Scott crossed...", "Scott beat three men and crossed..." and many times "Scott made no mistake from the spot".

The crowd would hold its breath in anticipation, ready for the feint, the swerve, the dropping of the shoulder, sending the full-back the wrong way before an inch-perfect cross was met by the head of Rafferty for another Town goal

Raymond Glendenning of the BBC called him "the second Matthews". Geoff Ford, in his Pictorial History of Grimsby Town, wrote that "Scott was one of the classiest players to wear a Town shirt... a pure ball player, he would juggle his way along the wing before putting over a perfect cross. He was also the penalty expert."

Charles Ekberg, the journalist and broadcaster who covered every single game the Mariners played from 1955 to 1980, wrote: "On his day he was one of the finest ball-players in the second division and could create havoc with defences".

In the fanzine Sing When We’re Fishing, Clive Wilson called Scott "The greatest player I have ever seen. He wanted the ball at his feet and then the crowd would hold its breath in anticipation, ready for the feint, the swerve, the dropping of the shoulder one way and moving the other, sending the full back the wrong way before an inch-perfect cross was met by the head of centre-forward Ron 'Chips' Rafferty for another Town goal!"

My Favourite Game features a second division 4-4 draw in September 1958 at Sincil Bank; poet and author Anthony Suter picked it mainly thanks to Johnny Scott’s presence. He remembers the aim of the team: "To put the ball at the feet of right winger Johnny Scott, then at the height of his fame and form. The plan succeeded with its ultimate aim, the head of Ron Rafferty in the box. Dad and I were fortunate enough to be standing to the right of the pitch. Three times Scott found Rafferty’s head and from it the back of the net. There were twice as many near misses and occasions when Scott’s swerving centres bisected a baffled, soon befuddled back four."

Something about Suter’s description of that game captures the excitement of football in the 1950s up to the mid-60s, my favourite decade in football. The crowds expected to be entertained and excited. There were two wingers in every side. Every team played 2-3-5, with the two at the back, and a player's first thought was to move the ball forward quickly. There was no emphasis on possession or keeping the ball, and passing sideways was anathema.

A winger and a gentleman

Johnny Scott, a winger in the traditional mould, epitomised that style of football and the atmosphere in those games in the mid-50s must have been tremendous with crowds of 18,000 at Blundell Park versus the likes of Blackburn Rovers, Sunderland and Sheffield Wednesday and crowds of 47,000 in the away game at Liverpool, 31,000 at Fulham and over 25,000 at West Ham United.

And what of the man?

Clive Wilson: "On and off the pitch Johnny was a gentleman who always had time for the youngsters. On more than one occasion I have seen him take an autograph book in to the visiting team's dressing room for some young Town fan. He even joined in boys' kickarounds in the local parks when walking home from training."

Mild-mannered, softly spoken, loyal, modest, a gentleman, married to Margaret, father of Caroline, the off-field pictures show him always smartly dressed in suit and tie, usually on the fringes of a group with a shy, boyish grin and a shock of dark, curly hair. 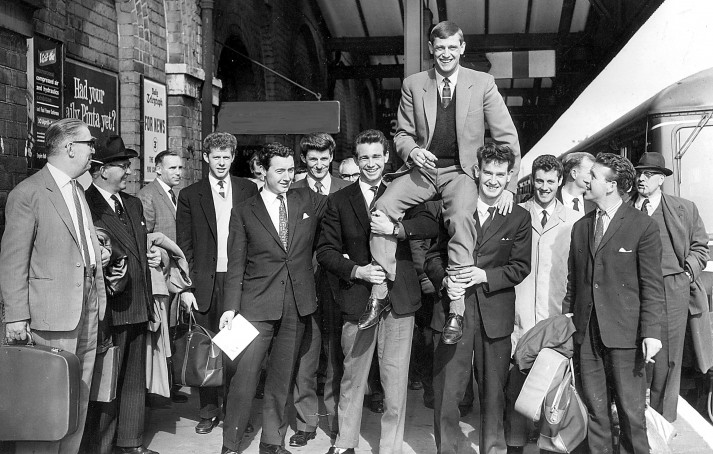 My favourite picture of him was taken in 1962 as the Division Three promotion side arrive back at Grimsby Town station from London after their 2-0 victory at Brentford the day before. He has the look of an amused, reserved, older brother while the younger players with their fashionable hairstyles, broad grins and large cigars seem grateful for Johnny Scott’s contribution. The whole team look genuinely delighted at their remarkable achievement. I wonder how many of Ron Rafferty's 34 league goals that season came from crosses from Johnny Scott?

By then, Scott had been providing crosses at Blundell Park for six years. And in 1958, his prowess had brought him recognition on the world stage.

Part two of this article is available here. Our thanks to Jim Connor and to the Grimsby Telegraph for their kind permission to use their pictures.