Sussex Rec. Home to mechanical death traps and misanthropic parkies. But above all a field of footballing dreams...

In the late 1960s and early 1970s the summers were endless and the sun shone every day. Or so it seemed. In the days before computers, video, DVD, we had Sussex Recreation Ground. My parents' house backed on to it, so every day of the holidays I would throw on some clothes and be straight out, squeezing through a small gap under the fence and out onto the rec.

The park was home to a number of mechanical death traps. A huge slide which children would occasionally fall off, requiring hospitalisation. Roundabouts which we would propel to death-defying speeds and leap on and off, resulting in the loss of several layers of skin from arms, legs or even heads. Swings we would ride to the absolute limit of their massive chain extensions and then leap off, flying through the air at great height before, we hoped, landing without sprained ankles and twisted knees. Looking back, it's amazing anyone ever survived a sixties childhood.

Mainly though, we went to the rec to play football. Lots of it. Every day.

The balls had a short life expectancy. The sight of a sadly deflated orb languishing miserably on a spike was all too familiar

All we needed was a ball and two jumpers which stood in as goalposts. In later years the council planted new trees on the boundary of the park, each one tied to a stake post with a circular metal mesh around it, approximately five feet high and a foot in diameter, a perfect goalpost. After that, only one jumper was required to complete our goal.

The balls were invariably made of plastic, some so cheap and light that they were nothing more than heavy balloons. They had a short life expectancy. Incredible though it may now seem, the park was bounded by an iron railing fence with an entire ring of lethal, pointed rusty metal spikes. As we often had to traverse these railings to recover balls landing in neighbouring gardens, every day brought the danger of impalement or tetanus. No boy was killed, but the sight of a sadly deflated orb languishing miserably on a spike like the head of a rebel at traitors' gate was all too familiar.

Once we somehow obtained an old, brown leather ball complete with lace stitching. It had a gash in the side revealing the rubber bladder, but to us it was like the crown jewels. We really thought we had arrived. Eventually the gash grew and grew, until the ball developed an alarming flap which made it almost unplayable. But we were loath to give it up. It was a blessed relief when it struck the iron railings at just the right angle to puncture the bladder.

Variants of the game

The games we played depended on how many players there were. Two would play 'three and you're in', taking turns being goalie while the opponent rained in a variety of shots. With three or four players, the goalie would boot the ball high up into the air and the outfield players would then compete against each other until one of them had scored three goals. Whoever got the last touch on the ball was credited with the goal, Harry Kane-style, even if it was a fluky deflection.

With five players we'd play a game called, for some reason, 'Workington'. There was a single goal, a goalie, and two teams of two who would alternate between being attackers and defenders. A variation on this was 'points', in which only headed goals were allowed.

Once a year, a set of goals was erected, complete with nets. We experienced the unmitigated thrill of seeing the ball strike the back of the net, soaking up the adulation of a crowd that didn't exist

Only when six players turned up would the game have two goals. From there onwards it could be any number per side. At times there were 15 players or more on each side, but normally the teams were far smaller.

With less than four a side we usually played a 'rush goalie', a tactic I was amused to see later adopted by professional goalkeepers dashing up for last-minute corners. A peculiar variation on the rush goalie rule, leading to endless debates as to whether a handball had occurred, allowed whichever defender happened to be nearest to the goal line to act as goalkeeper.

Once a year a six-a-side tournament was held in the park and a set of full-size goalposts was erected for a couple of weeks, complete with nets. These goals appeared huge to us, and were normally monopolised by bigger boys. But on those rare occasions when we could sneak on and try a few shots we experienced the unmitigated thrill of seeing the ball strike the back of the net. We would turn away, arms aloft, soaking up the adulation of a crowd which, though it didn't exist, was clearly imagined. To make it easier we would mimic the roar of the crowd ourselves, an annual excursion into a kind of football virtual reality.

Even at that age there were obvious differences in ability. Occasionally, Glenn Cockerill would drop by. Glenn was a year younger than us but very clearly a different class of player, slumming it by joining in with us mere mortals. He had this almost supernatural ability to control the ball even before it got to him. Once he had it, there was little point in trying to get it off him. It was as if he had the ball on a string and could do anything that he wanted with it.

It's no surprise that Cockerill was able to play at the highest level professionally for Southampton. I would like to know how on Earth it was that he slipped through Town's net. After all, he was the son of Town legend Ron, and older brother of Buckley-era hero John Cockerill.

Less welcome was an appalling young thug with a reputation for beating people up and stealing their pocket money. I will not name him because he was rather terrifying when he was 10 years old and I hate to think what he would be like these days. He was not a good player, but once when I ran to challenge him he warned: "Tackle me and I'll punch you in the face." Even at that tender age I was wise enough to recognise that discretion is the better part of valour and let him go.

Mr Myles was something of a local legend. A retired bank manager, it was rumoured that he may once have been a professional footballer. He would hint at things he had once said to so-and-so at West Bromwich Albion

Then there was Mr Myles. To kids of our age anyone over 20 looked old, but he must have been in his late 60s. He was a very rotund gentleman with thinning grey hair. He always wore a dark pinstripe suit, complete with shirt and tie and highly polished black shoes.

He would stroll over to any group of lads and stand there until the ball was rolled out to him. Then he would deliver beautifully flighted crosses and the occasional thunderous but well-placed shot at goal, always with the outside of his right foot. Sometimes he would actually run with the ball, which was quite a sight.

Mr Myles was something of a local legend. A retired bank manager, it was rumoured that he may once have been a professional footballer. He would hint at things he had once said to so-and-so at West Bromwich Albion, or tantalisingly drop in the name of some player we had vaguely heard of. He was a thoroughly charming man of whom I have nothing but fond memories.

Perhaps the most memorable interloper to our daily routine was a rather skinny, nervous-looking individual with a broad Irish accent and long greasy hair. He turned up with a photographer in tow and asked to join in. He was hardly dressed for football, wearing what appeared to be bathing trunks, and he had no shoes or socks, but we let him play anyway. He displayed the most sublime ball control. He was Alex 'Hurricane' Higgins, then snooker world champion, no doubt in town to play exhibition matches against Ray Edmonds, Grimsby's own amateur world champion.

I asked him whether he had ever considered being a professional footballer. "No", he said. "I'd have to play for Northern Ireland and they are shit." 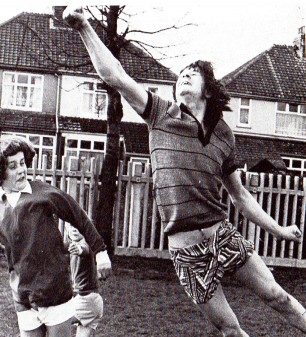 y years later I came across a biography of the Hurricane and there was a photograph, reproduced here, taken that day in 1973. I am not in the shot but it is unmistakably Sussex Recreation Ground with the characteristic concrete fencing which had replaced the iron-spiked railings.

We were totally devoted to playing. We may have stopped for meal breaks but I don't remember any. We made occasional forays to the corner shop ("Khanies", after the proprietor, an aged Swedish lady called Mrs Khan). There, for one old penny you could buy eight sweets: fruit salads, black jacks, candy prawns, or flying saucers.

Flying saucers were a strange round tissue sandwich containing a payload of what must have been pure sugar. As soon as the outer layer melted on your tongue the contents would explode, giving you the necessary sugar boost to go out and play for another four hours, until the park warden called.

The 'parkies' were invariably aged, male misanthropes. One was on a one-man crusade to correct common 'errors' in English language pronunciation. He told us that everybody was mispronouncing Arsenal. "It should be pronounced are-sea-nall. There are lots of words like that," he continued sagely, and went on to mispronounce Leicester, Norwich, and Woolwich. The parkie's main job was to sit in a tiny room in the pavilion all day, smoking hand-rolled cigarettes and reading the Sun. But he would emerge at dusk to eject everyone from the park and lock the gates, finally putting an end to our game.

All of the players were invariably male, and one wonders what the girls were doing while we were busy bruising our shins and grazing our knees. Eventually our hormones kicked in and we decided to find out, at which point visits to the rec became less frequent. Living out our dreams of footballing stardom was a rite of passage to kids of our era, but inevitably the lure of kicking a ball around for 12 hours a day gave way to other interests as we became self-obsessed, self-conscious teenagers.

Before long we became aware of the demands, responsibilities and pitfalls of the grown-up world around us as we ran inexorably towards adulthood. But those innocent days from a bygone era, enjoyed in an endless summer, are forever etched on my memory. How I treasure them.

Send us your own memories of playing in the park.