In Jolley you might trust, but don't forget Fenty is still in the building

It is mid-February, but already the close season is looming. Wim Wenders directed a film about it: The Cod Almighty Diarist's Fear of July.

Mattie Pollock, the official site announces, has signed on a two-and-a-half-year deal. The story is well worth reading. Admittedly, Middle-Aged Diary misses knowing when Mattie (does not even his mother call him Matthew?) first knew Jolley was interested in signing him, and exactly what kind of 17-year-old he is. But there are heartening quotes about Pollock, about the spirit among the first-team players and about the academy. They all say exactly what you'd expect them to say, but they say it with conviction. Neil Woods in particular has the knack of being both positive and honest, measured in his praise so it carries absolute credibility.

The only problem is, it cuts still further the scope for close season transfer speculation. Even if Michael Jolley takes a two-month sabbatical and forgets to put anyone else in charge, we'll still in August have two goalkeepers, four or five defenders, five in midfield and four strikers. Not only enough for a team, but a balanced team at that. What will there be to write about?

Some very good things are going on at Grimsby Town. The sun is shining but we can be sure that the roof has not been fixed. Not when a man who demands to know what exactly the Oystons have ever done wrong, who seemed ready to form a shit owners' trade union with the Oystons and the Allams, is in charge.

Town looking forward to a close season without having to reassemble two thirds or three quarters of our squad is not so strange. Two years ago, after Marcus Bignot had got busy with the club pen, John Fenty was boasting that the multitude of signings we had made would put us ahead of the game come July. Two months later, Bignot's penchant for bringing midfielders into the building was the item on his charge sheet as he was shown the way out.

Who, we were left to wonder, had sanctioned Bignot to sign all these players? While the boardroom is prone to such inconsistent decision making, so patronisingly conveyed, our trust in Michael Jolley will only take us so far.

It's not so long ago that John Fenty was claiming that our last successful manager, Paul Hurst, left because of the heckling he took from Town fans. Now we know different: "With Grimsby in the Conference I understood we had to cut our cloth but we'd come up against so-called lesser clubs with staff in positions we didn't have. When we got into the Football League I expected some things to change but very little did."

But let's not let him ruin our lunches. If anyone cares to spend an evening with John Fenty, you might like to take that cutting along. 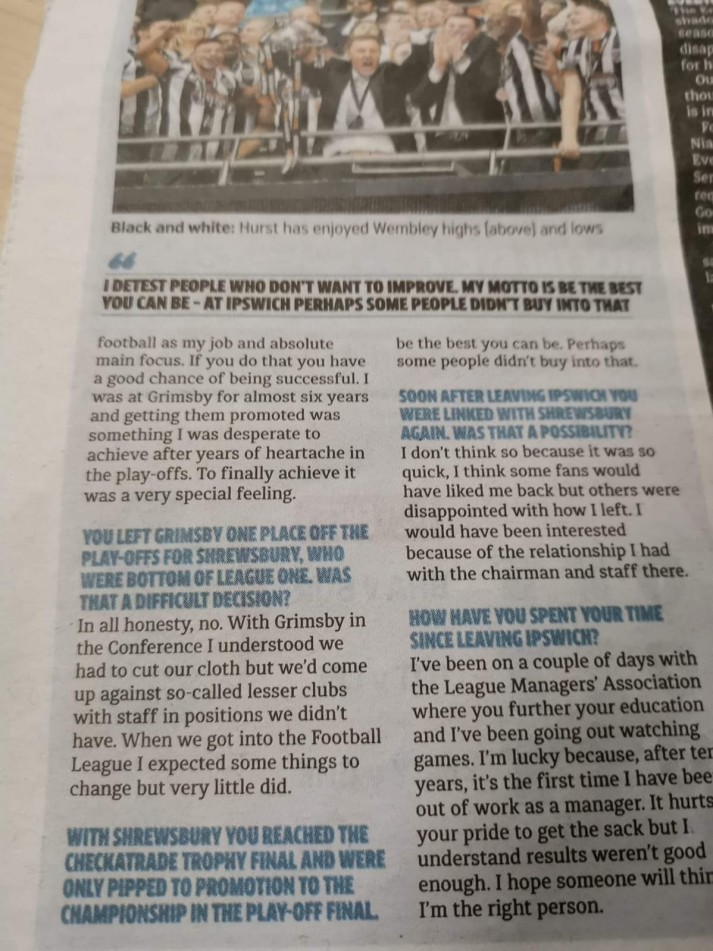