We've seen our last game under BP's historic lights without even knowing it, laments Peter Anderson. How could this happen? 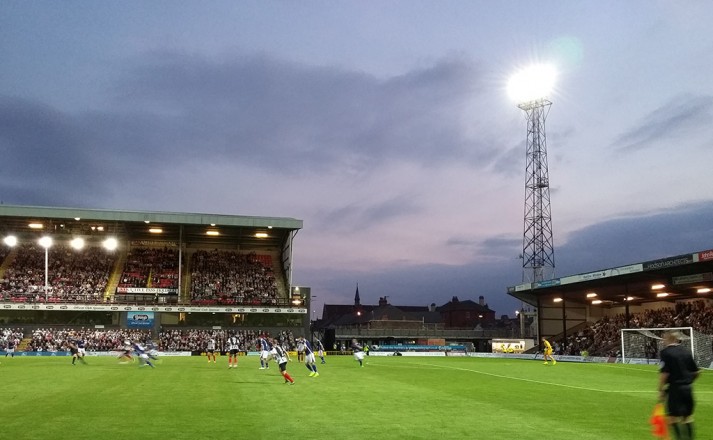 Floodlights dominate many of our earliest football memories. Craning from a motorway seat or railway carriage, straining for a glimpse of four towers at a time when all geographic knowledge came from the ninety-two clubs dotted across England. I'm still not convinced Crawley, Stevenage and Milton Keynes exist.

Old enough to hear the stories but too young to attend a game, the floodlights were once all I knew of Blundell Park. Sunday afternoons spent in the Imperial beer garden, chasing footballs and skinned knees. It was all beer and no garden, but five-year olds don't care, imagining that the floodlights had turned their heads to shine on them.

The trawlers had the Dock Tower and we have four beacons to bring us home. From all approaches, land and sea. Away for a day or a year, no matter. The first sighting always brings that pleasant knot of excitement. Memories of the great games and anticipation of the next.

For night games our floodlights transcend skyline and provide a magical pulsing canvas, integral to the landscape and the atmosphere. From afar they draw us in until they become giants glimpsed behind familiar alleys and gables. Just as the art of the latticed struts goes beyond mere function, so too does a light that at once illuminates and sets the scene.

When visitors from across the world say that Blundell Park is a proper football ground, the floodlights are quite literally framing that view, as a defining part of the stadium

Like timekeepers, they announce winter's approach, switching on before 3pm as the nights close in. The post-match exchanges take place in their court and judgments are set fast in the streets around Blundell Park before the reach of their glow has diminished.

Cynics will dismiss this as idle romance but the floodlight tower is an icon of footballing and architectural history. We have a duty not only to Grimsby Town but to football itself. When visitors from across the world say that Blundell Park is a proper football ground, the floodlights are quite literally framing that view, as a defining part of the stadium itself.

Added to that, our towers have a place in footballing history beyond Blundell Park. They were there at Molineux for the famous floodlit friendlies games of the 1950s, watched on live TV across the nation and inspiring an eight-year-old named George Best in Belfast. When Wolves upgraded their lights, our supporters raised £9,000 to purchase and install the famous towers in 1960.

News of their fate was slipped between other sentences at the recent Mariners Trust Q&A with John Fenty. "Deconstruction". No follow-up questions were asked. Perhaps the audience were too stunned by the information. Maybe they were distracted by a chortling Fenty as his choice of words prompted him to recall the occasion he snapped a Newport kid's flag in half.

Sickening, yet indicative of the attitude and gradual decline – or deconstruction – of GTFC under the current board, self-proclaimed custodians of the club. The floodlights have been allowed to rot since their black-and-white-painted 1990s heyday and it's unforgivable.

It will be a sad and emotional day if we ever leave Blundell Park. Even sadder will be to see her scrapped and dismembered piece by piece. The corners are gone. The floodlights are next. With no remaining evening fixtures, perhaps the hardest pill is that we've seen our last game under them without even knowing. Is it a fait accompli or can we still intervene? After all, they were bought by us sixty years ago – and still belong with us and Blundell Park in every sense.

Share your views on the lights using the Cod Almighty feedback form.