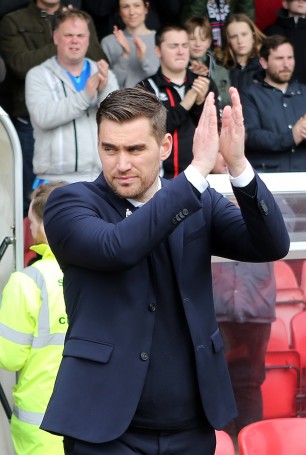 On 10 March 2018, Michael Jolley took charge of the Mariners for the first time, in a 1-1 draw with Port Vale. With Grimsby's defeat by Crawley on Saturday, he completed 46 league games as manager, a virtual full season. The 62 points earned from these games would, in a single season, have us finishing around 14th place.

This is the full record:

It is uncannily close to our record at the end of the last season in which Jolley was not involved, 2016-17:

In case anyone thinks we should be doing better, consider the state of the squad he inherited. In January 2018 under Russell Slade, we had offloaded our top scorer Sam Jones and our most creative midfield player Jamey Osborne. We also loaned out one our most industrious midfielders, Chris Clements, to a relegation rival who caught up with and then pulled away from us. Low on confidence, the remaining players looked as if they regarded the ball as an explosive device best avoided. Distribution was so poor the players might have been blindfolded. It was wretched.

Reading my despairing report on the Cambridge game, during Paul Wilkinson's brief cameo, makes you realise just how awful we were in every department save goalkeeping. Receiving my ticket, I felt like Long John Silver being handed the black spot by Blind Pugh. Something bad was about to happen. Jolley was also there. It was surprising that he sent in his application form after witnessing the shocking ineptitude on show.

He had seen with his own eyes the curious antics of Paul Dixon. He had observed Jamille Matt staggering around the pitch with the poise, balance and mobility of a collapsing building. He no doubt pondered the bizarre non-contributions of the dithering Sam Kelly and his evasive manoeuvres. He watched senior citizens in the heart of our defence huffing and puffing hopelessly in the wake of forwards from a later generation. He had watched James Berrett jogging around the pitch, seemingly intent on avoiding any contact with the ball.

This and more would have passed before his eyes in a seemingly endless parade of mediocrity. He would have been forgiven for retreating to a darkened room like Commander Kurtz in Apocalypse Now, and mumbling sadly to himself: "The horror, the horror." Kurtz, of course, being a dead ringer for the lamentable Russell Slade, the chief architect of the unfolding disaster then confronting us.

These are painful memories, and several of us are still undergoing therapy in an attempt to expunge them entirely. But we need to think back to the state we were in to appreciate the extent of the improvement we have witnessed.

Jolley took over a team with 36 points from 36 games. Given that we had taken just three points from a winless 15-game run, scoring five goals and conceding 27, it would have taken a brave man to bet on us staying up with a squad that had arguably been the worst team in the country for months. He was able to bring in Andrew Fox and Gary McSheffrey, but other than that he had no transfer options.

To somehow keep us from relegation in such circumstances was a great achievement. To have us end the season near the top of the form table would have been totally unthinkable a few weeks earlier.

Of course this did set the bar very high on expectations for this season, and the heroics of the previous run-in were quickly forgotten as we slumped to six straight defeats, with some calling for his head. Happily we came through that crisis, and the improvement in the squad, performances and results is now plain for all to see.

The Jolley project is clearly a work in progress. The squad seems to be improving in stages and we already have a solid base of contracted players on which to build for next season. We have a number of promising young players on the books: Harry Clifton, Ahkeem Rose, Mattie Pollock, Max Wright, and several others coming through the ranks. A few decent signings in the summer will make us very competitive. For once, we don’t have to pin our hopes on replacing the entire playing staff in the summer. It's evolution rather than revolution.

The sinking ship has been saved, rebuilt and upgraded. It won't all be plain sailing, but I believe there are better times ahead. Happy anniversary, MJ.

The picture is from Grimsby Town FC, with thanks for their permission to reuse it.

Send your feedback on this article.