Champions: a short story based on true events

On Saturday 7 April 1934, victory for Grimsby at Hull would win them the Division Two title. It was a heady prospect.

Temporarily ashore while a crew-mate is hospitalised with a broken arm, he has, earlier in the day, taken in a pre-season friendly football match between KR and Valur, the city’s principal teams. Because their black and white striped shirts resemble those of his own Grimsby Town, he has been loud in his support of the victorious KR.

Drunk, now, on strong bootleg-beer in this smokey, underground, speak-easy, his voice is flat and loud as he wanders the room, imposing himself on drinkers in dark corners who either laugh at his slurred chants or try to ignore his insults of Valur and of Iceland in general.

"You have too much drunk, enska strákinn. Go home. Farðu heim" says the man's girlfriend.

"Like you English say, 'Too much sniff the barmaid's apron'" chuckles a red-faced, heavily bearded old man.

As he weaves between tables to the exit, two young men of Reykjavik, Elmar Guðjohnsen and Heidar Sigþórsson follow him. From a corner of the room, Frank Sage, Mate of the S.T. Kingston Warrior of Hull, watches with interest.

Outside, the Icelanders set upon Billy, drag him into an alley, and begin to pummel his stomach and ribs.

They are disturbed, briefly, by the imposing figure of Frank, but they carry on.
"Setja hann niður," Frank growls.

"Piss af enskumaður," answers the shorter man who is holding Billy by the arms.
Frank knows what this means but his Icelandic does not stretch to a reply so he holds out his hands at his sides, unthreateningly, smiling.

"He insult my team. He is rude about our country. He deserve this,” says the taller one, halting the beating to speak.

"Yes. You're right. What he said was wrong. But he doesn't know Iceland like I do. I'm sorry he said those things."

They stand their ground as if daring Frank to intervene further. He too stands firm, unblinking, calm, speaking plainly. "Just let me take him back to his ship. He'll be gone by morning and I'll let him know what an idiot he's been and tell him what he’s done wrong."

Realising Frank has no fear, they accept his apology on behalf of the drunken boy and push Billy towards him.

"Farðu heim, Englishman. Go home" says the taller youth. "Farðu heim." And they watch as Frank guides the boy down the midnight street toward the harbour.

A weak Northern sun wakes young Billy Pratt. Cuts on his face sting. His ribs throb and his mouth and throat are dry. He is stretched out on a coil of rope on the deck of a ship that is not his own.

"You're alive then, young Grimmy,” Frank laughs, offering him a chipped enamel cup with a brew of Camp coffee. "And I think you've me to thank for that."
"Where am I?"

"You're aboard the Kingston Warrior. I'm Frank Sage, her Mate. Get that coffee down you, then you might be sober enough to get back to Pride of Lincs. Tide turns in an hour and she's ready to sail."

"Plenty in Reykjavik will be glad to see the back of you, son. You made a bit of a twat of yourself last night. I might even have saved your life, who knows?"

"You upset our Icelandic hosts. They're good folk, kind and proud. And they're full of hospitality. And you insulted that. They're hard as well, they have to be to put up with all this wind and fire and ice. Considering their warrior history, only an idiot would expect 'em to put up with behaviour like yours last night. And if you are not shamed of yourself, then you should be."

"They’re not much good at football though, these Scrobs, are they?" Billy tries to laugh, wincing at the pain in his sides, memory returning in fragments.

"And you're not much of a fighter. You'd have been in hospital with your ship-mate if I hadn’t persuaded them to leave you alone. Or in jail.

"Either way, you'd have missed your ship."

Billy sits up painfully. "You know that KR side, they're not a patch on Town. They've no-one like Glover or Bestall. No Dyson or Betmead or Buck."

"And Iceland, have they even got a national team? If they have, they won't be good enough to play England will they. It's not as if that'll ever happen."

"Never say, never, young Grimmy. Who knows what's in store for the kids and grandkids of those lads you upset last night?"

"You're from Hull" he says. "The Tigers. They're not very good at football either, though they might beat the teams I watched yesterday, just. Hull City? It's not as if they'll ever make it to the first division is it? They're already punching above their weight as it is. And anyway, they've no tradition. They're just a bunch of Johnny-come-lateleys."

"But WE… THE TOWN, we're going to be in the first division next year. And when we beat you in Hull on Saturday we'll be champions."

"You might. But nothing's certain, lad. Success… failure, nothing lasts for ever. We just have to keep faith and trust in hope; and fill our nets while the weather's fair, cos there's usually a storm somewhere over one horizon or the other.

"Will you be coming to Anlaby Road for the match?" Frank asks.

"Then if you make it, remember it was a Yorkie what kept you out of hospital and jail; and behave yourself in Hull."

"I owe you" Billy mumbles with some humility, putting down his empty cup and reaching out, painfully, to shake Frank's hand.

"Now, off you get. Your Skipper won’t thank you for stopping his ship. And I'll keep an eye out for you on Saturday." 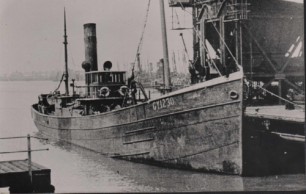 Two trawlers round Spurn, entering the Humber. Billy Pratt, at the bow rail of Pride of Lincs, looks back on the starboard side to see a grinning Frank Sage offer a slack salute from the bridge of the Kingston Warrior. The muddy waters of the estuary are seared scarlet in a cloudless sunset as one ship pulls to port and Grimsby Roads, while the other pushes onward, for Hull.

The P.S. Brocklesby gently kisses the wooden decking of Corporation Pier. A mighty roar drowns out the squawking of seabirds as the army of Mariners' fans on the paddle steamers deck, and in its lounges and bars, cheer and shout. The friendly invasion of the seaport of Kingston upon Hull begins.

It is a joyous Spring morning for the patient supporters of Grimsby Town Football Club. It is a day of celebration - two points for a win in today's match against a mid-table Hull City and the coveted second division championship trophy is theirs - with still four more games to go before the season ends.

A couple of hours earlier, folk had woken with grins on their faces. The first of five packed, two-shilling, special trains had steamed out of Cleethorpes, New Clee, Grimsby Docks and Grimsby Town to cross the flat Lincolnshire fields to New Holland's gaunt wooden pier with its distant views of the Humber's North Bank.

The mighty river has never looked calmer or more sparkling, the sky never bluer as they sail in style to the match; paddles churning, throwing early champagne spray into the air.

The Brocklesby is a mass of black and white, full of excited chatter, bursts of good-natured chanting, singing and high jinks.

It will be like this also, shortly, and throughout the day, when the P.S. Killngholme, joins her sister-ship in the Humber Ferry Football Shuttle.

It is a wedding, a christening, a works' beano, a day out at the seaside all rolled into one.

It is their time.

Others talk of the men, local heroes. 'Ginger' Hall, a joiner for Wilkinson and Houghton during the week, tough-tackling half-back on Saturday. Boston's Charlie 'Swerver' Craven. Fearsome Teddy Buck. Handsome Harry Betmead, East Marsh born, majestic centre-half. And the others, their strength, their speed, their fitness; their qualities as men: modesty, courage, grit.

Voices hush when talking of two men in particular. Ernest Matthew ‘Pat’ Glover, tough Welsh goal machine, hat-tricks against Oldham and Manchester United, 40 goals so far this season and, of course...Jackie Bestall, 'our Jack', their leader. The finest inside-forward in the country bar none, a magician with the ball.

And in one corner of the deck a battered-looking Billy Pratt, sporting a black eye and numerous cuts and bruises, tries to sleep. He's made it. Just.

The gangways are positioned but the Mariners fans hold back politely as the mayors of Grimsby and Cleethorpes, their fashionable wives and assorted club dignitaries are greeted by Hull's equivalent, mayoral chains, bowler hats, elegant fashions. Smiles. Handshakes.

"That's a touch of class from the Hully-gullies, a proper civic welcome."

"A brass band would've been nice!" 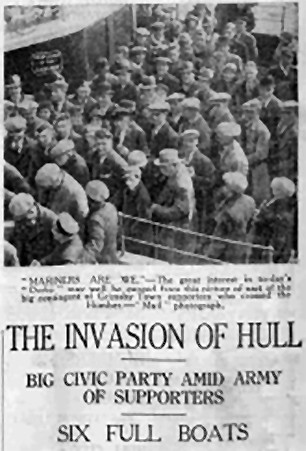 And then the invasion begins. They launch themselves onto dry land. The tidal wave of black and white, rushes, pushes, clambers, then saunters and strolls towards the waiting city.

They fill the pavements, fill the trams with their broad grins, their cheekiness, their larking, their fun and games, their dancing jigs. The buildings here seem finer, more polished, the streets wider; Anlaby Road, Ferensway, Kingston Street, Wellington Street; the pubs larger and shinier with more glass, more brightly painted than the pubs in Freemo, Riby Square and Meggies.

"Three nil to the Tigers!"

"The Welshman's injured. Who's gonna score for you, now?"

The whole of Hull is swamped by a black and white flood. The City belongs to Town today.

In part two: read how the match, and the lives of Billy Pratt and Frank Sage, unfold