In 1925-26 part one, we read how Grimsby made a strong start to the season. A match in October gives them a chance to go top of Division Three (North) 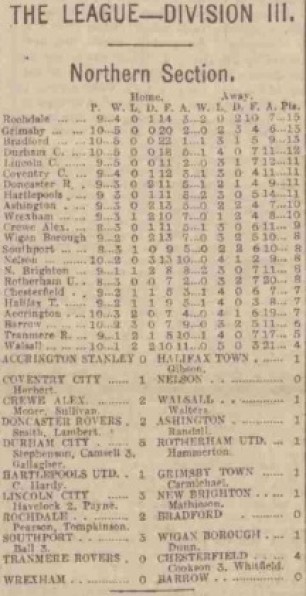 On 3 October Rochdale beat Bradford 2-0, overtaking them at the top of the table. Grimsby, after drawing at Hartlepools United, were second, two points behind. Town's next game was at home to the unbeaten Rochdale. The Mariners were yet to drop a point at Blundell Park: win again and they would go top.

This early in the season, a clash of the top two is a source not of tension but of excitement. It is something to look forward to throughout the week. During lunch breaks, in pubs, over garden fences, Town fans preview their prospects.

They'd read the reports that Rochdale's ex-Grimsby keeper Harry Moody had made several fine saves to deny Bradford last Saturday. Could Carmichael find a way past him? And they'd study the league table showing Rochdale's ten goals from four away games. Could the Grimsby defence keep them at bay? This is not yet a game to draw in the whole community, but no football fan wants to miss the visit of the league leaders.

The day comes round and the gate is 11,602, the highest of the season so far and almost 5,000 more than for the last home game. The new stand, the whole ground, is full, expectant. The Mariners will live up to the occasion.

Full-backs Arch and Jacobson kick and tackle almost faultlessly. The half-backs are sound, with Pugsley "outstanding as a breaker of combination and a supporter of attack". But it is the "thrustful" Grimsby attack and especially the inside forwards – Joe Cooper, Frank McKenna and Jimmy Carmichael – who make the difference between the two teams.

A couple of years before, it had been said of Frank McKenna – still only a teenager at the time – that he was a player in the making, but that his advance was being marred by selfishness. In 1925, he still had an eye for goal and a splendid shot to go with it: he'd score 14 times over the season. But McKenna now also had a "fine judgement in opening out the game with well-conceived passes". Half an hour had gone when he played a forward pass along the ground. It found Carmichael, running between the Rochdale backs. He had only Moody to beat, but the goalkeeper had made a headlong dash from goal to close him down.

Carmichael dominates the team photograph for that season. At 5 foot 10, he was taller than most, but far from the tallest in the team. Broad-shouldered and muscular, he looks strong. But it is not his physique that draws the eye. It is the rolled-up sleeves over folded arms, like a man who means business. It is his direct stare at the camera: neck straight, head erect. The look in his eye is not without humour and intelligence, but it is not without belligerence either.

The picture suggests the qualities Carmichael needed to thrive as a centre-forward. The strength to win a ball with a centre-half pushing at him insistently. The skill to bring it under control, and the footballing nous to use it well. Then he had to be able to finish, with ice or with fire.

Faced now with the onrushing Rochdale keeper, Carmichael kept his cool. With perfect judgement, he lifted the ball over Moody’s head and into the net. 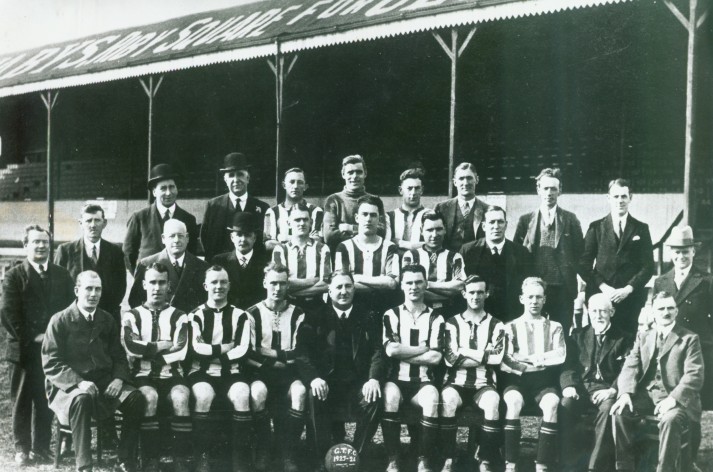 First the cheers. Any goal would have been good enough to cheer as it put the Mariners in front. But then for minutes after the excited buzz, as the fans replay McKenna's pass and Carmichael's chip, compare notes, impressions, superlatives. And then a new note of anticipation. It's been a good game so far: what is going to happen next?

The crowd didn't have to wait long to find out. Ten minutes later, Carmichael scored again, this time with power. He met a cross from the right, swivelling on one leg to slam it past Moody, "a magnificent example of judgment and timing".

The third goal, early in the second half, was even better than the first two. It came from Joe Cooper.

Cooper was a teacher. He had been willing to sign for Town in 1924 in part because, unlike one of his former clubs, they were willing for him to carry on teaching during the week. He was not the only player in the squad with a profession. Goalkeeper John Atter was an analytical chemist at a Derbyshire coal mine. Amateur Harry Kitching could only promise to play when his studies at Leeds University allowed it.

Being a full-time professional footballer in Division Three (North) was no fantasy. The league had been formed during a trade depression and times of industrial unrest, straining the finances of clubs trying to develop their grounds to meet Football League standards. The footballers' maximum wage was above the average for manual workers, but few northern section players were on the maximum, and close-season wages were a rarity.

The variation in budgets across the third division must have made it more like the present-day Conference than the Football League. Grimsby were one of the better-established clubs, but even so, there had been frequent rumours that Carmichael would be sold to clear debts which now totalled £4,938. The youth-only policy was at least in part a matter of finance. That was the environment – cash-strapped and insecure – in which a third division player lived. No wonder that those with another profession were keen to keep it up.

There must have been times when Cooper thought about giving up football. It was no childhood dream. But perhaps many a teacher daydreams about facing his class when on the Saturday he has put his side on top of the league

Then there was the risk of injury. Cooper, like Carmichael, is in the front row of the team photograph. He is taller than Carmichael, but – slightly stooped, reticent in the shadows of his neighbours – you wouldn't know it. A delicate, ball-playing inside-forward in the rough and tumble of the third flight, Cooper inevitably picked up more than his share of knocks.

Rather than wonder why he didn't give up teaching, there must have been bad times when Cooper thought about giving up football. It was no childhood dream that he was living.

But perhaps many a teacher daydreams about being able to face a class on a Monday morning when on the Saturday he had put his side on top of the league with a score like this.

"The third goal showed Cooper as a craftsman, for when Hopkins failed to check Marshall and the wingman centred, Cooper feinted to shoot in one direction but lifted the ball gently into the other corner of the goal, with Moody completely nonplussed."
(Athletic News, 12 October 1925)

Grimsby's 3-0 win took them to the top of the league. That only lasted a week. But goals like that: they stay with you forever. Joe Cooper – a teacher and a football artist – must have relived it now and again, with quiet pride, for the rest of his life.

Thanks to Dave Wherry for providing the team photograph (copyright holder unknown).