In 1925, Grimsby Town had been two decades in decline. The board, the managers and the fans had been at odds ever since World War I and before. But in August 1925 that began to change.

The period between the first and second world wars became the most successful in the history of Grimsby Town. By 1939, they were a well-established top-flight team. They had twice reached the semi-finals of the FA Cup. Three Town players had won England caps and Pat Glover had starred for Wales when they won the British Championships in 1936-37.

1925-26 is the season when that glory began. It is also a season at the very edge of living memory.

The oldest of Town fans – near or past their 100th birthday today – was maybe taken to Blundell Park in the spring of 1926 that they might one day say: "I saw Jimmy Carmichael play." They can describe strikers from Pat Glover through to Pádraig Amond, but Carmichael? No more than the memory that they were there. He and his team mates and all they did together are frozen in the record books.

Our grandparents or our great-grandparents would have adored Carmichael. They would have willed the clock through the week that it was Saturday afternoon again

But our grandparents or our great-grandparents would have adored Carmichael and his goals. Would have argued whether Charlie Wilson – a rare locally born player in a team full of Scottish and north-eastern accents – was better at half-back or at full-back. When the ball was at the feet of Joe Cooper with a defender to beat, they would have held their breath in anticipation. They would have willed the clock through the school or the working week that it was Saturday afternoon again, and another instalment in Town's promotion bid.

The game has changed over the last 95 years, but it was nevertheless sport, and the experience and the emotion of the game were not so different from today. People would have looked to football for a release from difficult times. Everyone would have known men – some of them Town players – killed or disabled during World War I. The 1925-26 season ended amid preparations for the General Strike.

But, then as now, there must have been times when supporting Town felt more like another burden than an escape. In 1903, not much more than 20 years before, the Mariners had been playing in the old Division One. Since then they had spent a season in non-League; and in 1920, only the formation of a new third division had saved the club from dropping out of the Football League once more. Ever since, they had remained rooted in the basement league of Division Three (North), showing no promise that Town could regain – let alone exceed – their former stature.

Blundell Park in 1922 Continual failure provoked recriminations. In June 1920, the club board had reluctantly handed over responsibility for player recruitment and selection to a team manager. Their first appointment, Haydn Price, lasted only four months. His successor, George Fraser, lasted three years but he, like Price before him, resigned, complaining that directors were interfering in team affairs.

To replace Fraser, the board in June 1924 named Wilf Gillow as player-manager. It is easy to imagine that the reaction was sceptical. The club had debts of over £4,000, so perhaps making a player the manager was a neat way to cut costs, especially if some directors remained convinced that there was no need for a manager, that they could pick the team perfectly well themselves. Gillow's first season in charge produced only another mid-table finish.

That was the background in which the 1925-26 season began. No fan starts a season without a tingling of hope and excitement, but Town fans, more than most, had come to learn that the reality does not often live up to the expectation. Would it be different this time?

"Retaining only young players at the close of last season, Grimsby Town have sought to recruit their forces by signing only young men of promise."
(Athletic News, 3 August 1925)

More than 9,000 people are making their way to Blundell Park for the first game of the season against Doncaster Rovers. There is plenty to talk about, plenty to look forward to.

First, the new offside law. Today, for the first time, a forward would need only the goalkeeper and one defender – not two – to play him onside. Clubs had been becoming increasingly adept at playing an offside trap and matches had been getting congested in midfield. Would the new law succeed in opening up play? Or would it simply encourage teams to kick and chase?

The crowds make their way through the turnstiles and can see properly for the first time the work which has been done on Blundell Park over the summer. The stand nearest Grimsby Road – one of two that had been reconstructed when the club moved from Abbey Park in 1899 – had been demolished. The new stand in its place will come to be known by the name of the man who helped fund the improvements: Alderman Frank Barrett. The board had formed a ground improvement committee and the changes they were making will carry on through the season.

Then the teams come out. There are four new faces in the Grimsby side. 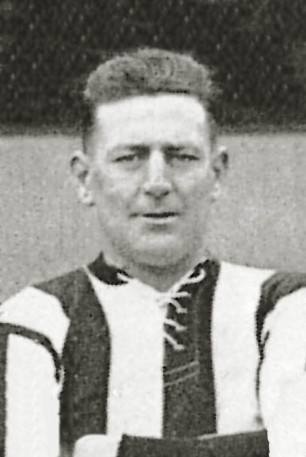 Hugh Jacobson Wilf Gillow had beaten competition from several clubs to sign Hugh Jacobson from Blyth Spartans. The 22-year-old full-back is short but stocky, a tough nut for a forward to crack.

Two new half-backs had come to Grimsby hoping for more first-team football: Jack Pugsley from first division Cardiff, his home city; and the Sunderland-born Jack Hardy from Derby County of Division Two. Hardy is six feet tall and 26, Pugsley an inch shorter, but heavier, and a year younger. Both notably tall for the time, they look like men who will give Town an edge in the midfield battles, whether the ball is in the air or on the ground.

The new outside-right is another north-easterner, John Foster, a slighter figure. He is the only one of the four who will not leave much mark. By the end of September, he will have lost his place to another new signing, Charlie Devan.

After taking stock of the new men, a look, and perhaps a cheer for the familiar figure of Jimmy Carmichael, at 30 an exception – with full-back Harry Arch – to the club's youth-only policy. Originally signed as a centre-half in 1920, the Scot is now the club's longest-serving player, although had it not been for a change of position he might have been forgotten after a single season at Blundell Park. As a centre-forward, he has 99 League goals to his name.

Carmichael would have to wait for his century, but not too long. Perhaps because 1920s grounds were more exposed to the weather, perhaps because of the tactics of the time, match reports often made a point of saying which team had the wind behind it in the first half, the games where it wasn't a factor reported as an exception. Doncaster had first use of the wind.

Nevertheless, Town's new half-back line was splendid and Jacobson and Arch defended finely. Doncaster did not cause too many problems. Nil-nil at half time and rational good sense would have said the game was Grimsby's to win, but the wait for the season's first goal is always a nervous one.

Carmichael scored in every one of Grimsby's first six matches. The last was in an 8-0 win. The same evening Bradford also won 8-0

Ten minutes after half-time, Carmichael was fouled in the penalty area. He took the penalty himself and scored. From then on, Doncaster were overrun as "the Grimsby forwards engineered many smart movements in midfield".

Two late goals gave the scoreline a fair reflection of the Mariners' superiority. The pick of them was scored by inside forward Frank McKenna with a left-foot drive. Before that, Carmichael's second had come when he headed the ball out of the goalkeeper’s hands.

With two goals, Carmichael had started the season as he meant to go on. He'd score in every one of Grimsby's first six matches. The last of those six was in an 8-0 win over Tranmere. The same evening, league leaders Bradford (Park Avenue) also won 8-0.

It was going to be that kind of season: plenty of goals under the new offside law, and keen competition for the title. The intrigue and the excitement that had drawn supporters to the first game would run all the way through until May.

In 1925-26 part two: the Mariners play host to the league leaders