Christmas and boxing day games against league leaders Bradford offered Grimsby a chance to get back into the promotion race.

"The importance of the Christmas holiday fixtures in the Football League is not underestimated by the clubs. Spectators may look upon the games in the nature of holiday entertainment, as indeed they are for the people, but to players and officials they are matches to be regarded in a different light. The players have to forgo the majority of the customary festivities, as the strenuous games on Christmas Day and Boxing Day will not allow those who take part to indulge themselves in luxuries. To the clubs the games may have a vital bearing on the future and the need for points is paramount."
(Sheffield Daily Telegraph, 24 December 1925)

Grimsby's holiday fixtures provided a double-header against Bradford Park Avenue. The two clubs had been level on points at the top of the table in late October. Now Bradford were still top, but with a lead of eight points over Grimsby and six over second-placed Rochdale. Rochdale and Grimsby each had a game in hand – but with just two points for a win, Bradford's advantage was formidable.

Grimsby's defensive problems had now been resolved. To replace Harry Arch, Fred McLachlan was signed from Coventry and joined Jack Hardy and Jack Pugsley in the half-back line. Charlie Wilson moved to full-back and proved sound in partnership with Hugh Jacobson, or Ernie Jackson when Jacobson was unavailable. The full-backs and half-backs would remain consistent to the end of the season. 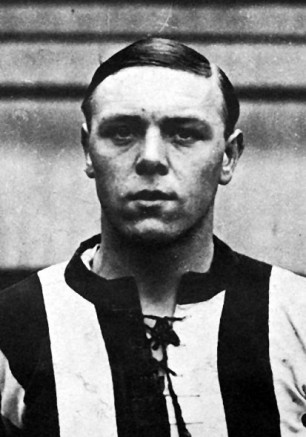 Joe Robson There was, though, a significant change in the forward line for the festive period: Jimmy Carmichael, the scorer of 17 goals already this season, was absent.

His last appearance had been in an FA Cup replay on a snow-covered, icy pitch against a "sturdy" Kettering defence, but there is no report of him being injured. For whatever reason, manager Wilf Gillow decided to give Joe Robson a chance at centre-forward.

The 22-year-old Robson had made just nine first-team appearances for Town. The threat he posed was of a different kind to Carmichael's. He was short, but strong, quick and tenacious, continually harassing defences. But, like Carmichael, and despite his inexperience, he could open up the play for the rest of the forward line, and he was a fine "goal-getter".

The week before Christmas Robson led the line against New Brighton, completing a hat-trick within a few minutes as Town came from a goal down to win 4-1.

It was some encouragement to take into the Christmas fixtures against Bradford. On Christmas Day Town would be at home to a team that had taken nine points out of a possible ten from their last five away games. On boxing day they'd travel to Park Avenue, where Bradford had dropped just one point all season.

We can only imagine the scene at Blundell Park. Most Christmas Day games kicked off at 11 in the morning. The gate of 13,230 was the highest of the season so far, with a proud show of new hats, scarves and rattles, and a more furtive use of the hip flask, the scent of rum and cigars mingling with cigarette smoke. Perhaps a band played carols before the game began. Once it did, Robson was once more in fine form. His second consecutive hat-trick, in a 3-0 win, sent the Town fans home happy to their Christmas dinners.

But to make an impression on Bradford's lead, Grimsby also needed to take something from the boxing day game. Park Avenue was ankle-deep in mud, patches of it under water. Yet somehow the two teams contrived a thrilling "ding dong" struggle. Grimsby had the better of the first half, but at the start of the second, Bradford pounded the Town goal. 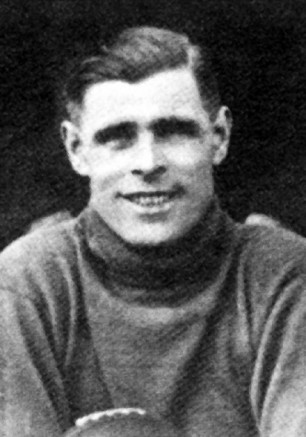 Jock Archibald Jock Archibald was in tremendous form. Other than a missing thumb – the result of an accident some time before he joined Grimsby – he was "a man possessed of all the attributes which go towards making a successful goalkeeper. He has pluck allied to splendid powers of anticipation and resource." Twice in quick succession Archibald denied Bradford with magnificent saves at point blank range.

The Bradford forward Ken McDonald twice missed open goals. Then a moment players on both sides must have dwelt on many times in the coming months.

Archibald had come off his line in a goalmouth melée and McDonald got his foot to the ball to roll it past him and towards the goal. He was engulfed in the congratulations of his team-mates, but the referee indicated that the ball had stuck in the mud without crossing the line, and was still in play. A Town defender reacted first to hack it to safety. Had it not been for the premature celebrations, McDonald would have had time to take a second kick and put Bradford ahead.

The match remained goalless. The pitch churned up, constructive football becoming more and more difficult, and a stalemate seemed inevitable. The match was being played in front of a crowd of 18,599. As play was bogged down, their minds must have drifted to the consolations of a draw.

Perhaps the Bradford right-back lost concentration. With six minutes to play, Robson received the ball and played it to Billy Marshall, who had some space to work in. The left winger had been having a fine game and now he dribbled and crossed into the Bradford penalty area. The outside right, Charlie Devan, running in, met the ball to head home the only goal of the game.

"A Bradford Bomb" was the headline in the Leeds Mercury. You can imagine the home support falling silent, their leaden mood only accentuated by the thin cheers of the few elated Town fans in the ground. Most Grimsby supporters would only read the news in their evening paper.

Excellent news to end the holiday with. The players and officials of Grimsby Town had contributed royally to the seasonal festivities in Grimsby and Cleethorpes by completing a double over the league leaders. The Mariners were back in the race for promotion.

Thanks to Dave Wherry for the pictures of Joe Robson and Jock Archibald (copyright holder unknown).