Their Christmas wins over Bradford put Grimsby back into contention for the Division Three (North) title. But they still had ground to make up across the winter mud

"The Grimsby v Chesterfield match provided the best game I have yet seen in the Northern Section – Mr G.N. Watson, the famous referee, who had charge of the Cup final last season"
Sheffield Daily Independent, 3 April 1926

Good Friday, with the fishing fleets in dock, was always a big game in Grimsby. In 1926, it was a huge game. Quite apart from the usual allure of Blundell Park to trawlermen back home and with money to spend, the Mariners were within touching distance of the league leaders.

To get there had taken a huge physical effort. In January, after their Christmas double over Bradford, one Town game had been abandoned to fog, then they had been involved in an FA Cup tie at Birmingham. Once more they were eight points behind Bradford, only now with three games in hand. But those three games would have to be played and won to give Town a fair chance of promotion.

Just when pitches would have been at their heaviest, the team hit outstanding form. The forwards always were neater, more polished and methodical than the opposition. Jimmy Carmichael was restored to the attack and scored nine more goals. Against Accrington on 30 January, according to one account, he was "always working and he led the line with skill and dash". He was rewarded with a hat-trick. 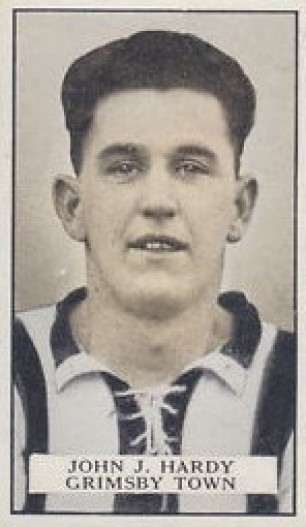 Grimsby's defensive record was even more impressive, with 11 clean sheets from 15 games beginning with Town's two wins over Bradford. Jock Archibald continued to make stunning saves. The full-backs tackled and kicked accurately and reliably. The half-back line, it seemed, was key to Town's success, always forceful and resourceful.

Captain and centre-half 'Jack' Hardy was in the thick of it, a commanding figure and a powerful pivot. On 23 January Town had travelled to Halifax, also in good form and hopeful of competing for promotion. The match remained goalless until midway through the second half when Hardy beat the goalkeeper with a shot from 40 yards. It was the kind of goal that breaks resolve. Charlie Devan scored a second two minutes later and the Mariners took both points off a potential rival.

Hardy's importance was readily apparent from the effects of his absence. Grimsby lost just once between Christmas and Easter, at Rochdale when Hardy was injured. At Coventry he was described as "the mainspring of many attacks and resourceful in defence". Grimsby looked on course for an easy win until he was forced to withdraw with a fractured jaw and two lost teeth, and Town dropped a point.

Hardy was back in the side next week, but perhaps still feeling the effects: he was not quite himself and "Wrexham… held Grimsby Town at bay in the fishing centre for 82 minutes, the elusive Carmichael then relieving the feelings of the home crowd by squeezing the ball inside the post with his head" (Liverpool Echo, 27 March 1926).

Wrexham had done Town favours with wins over both Bradford and Rochdale as the Mariners hauled in the leaders. At the end of February, Town had played one of their games in hand and reduced the gap behind Bradford to five points. By Good Friday, the gap was just two points and Grimsby still had a game in hand.

Where once the Athletic News had written of Bradford's triumphant progress to the title, now they took note of Grimsby's bold bid. "The Town's fight is arousing tremendous interest"

Where once the Athletic News had introduced its Division Three (North) reports with accounts of Bradford's triumphant progress to the title, now they were taking note of Grimsby’s bold bid for promotion. When the Mariners won one of their games in hand on an early Thursday evening, a crowd of 8,355 demonstrated that "the Town's fight is arousing tremendous interest in Grimsby".

The scene was set for the visit of Chesterfield; in fourth place, they were still in the title race themselves. The weather was fine and the crowds flowed in, a gate of 16,086 setting a club record for a league game. The ground improvement committee had carried on its work. New wooden terracing had been built on the corners either side of the Hazelgrove Stand, at the Cleethorpes end of the ground. Every seat, every vantage point, was taken. The tale has been passed down that fans sometimes fainted at the Good Friday game: easy to imagine in 1926, with the press of bodies in the heat. It was gala day.

Grimsby, and outside-left Billy Marshall in particular, were in no mood to disappoint the holiday crowd. Up against his old club, in the very first minute, Marshall slipped the ball through to inside-left Frank McKenna, who shot over the bar. The early miss just heightened the expectation.

Town continued to press. They won a free kick wide on the right, taken by Devan. The right winger had taken time to find his feet at Blundell Park but now his cunning and his well-judged centring were making their mark. His free kick came back to him after Joe Cooper misdirected a header. Devan picked out Marshall closing in from the left to smash a rising shot into the net. 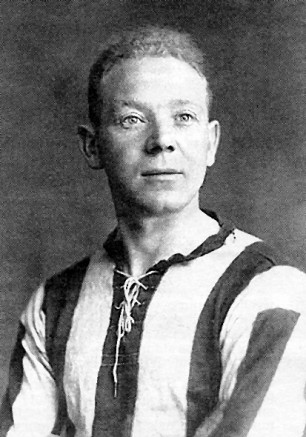 t was Marshall's day. Consistent selection undoubtedly helped Town through the season. Ten players each made at least 28 appearances, but Marshall was the only one who played in every one of Town's 42 league games. "Fast and tricky", his shock of red hair is somehow vivid even in a black and white photograph. That day, it must have been blazing in the sun.

Marshall was 27, he had fought and been gassed in the war, but his face is perennially boyish. You imagine him always on the move, a terror to full-backs.

His crossing was more erratic than Devan's but against Chesterfield he "played absolutely the finest game against his old comrades that he has played for Grimsby. He could do nothing wrong".

Through the first half, only fine goalkeeping, last-ditch defending and the crossbar stopped Grimsby from increasing their lead. Marshall and McKenna combined time and again to engineer fine chances. The Chesterfield right-back Alf Saxby had only just recovered from influenza. He had a torrid afternoon, ended 20 minutes early after a collision.

By then Town too were playing with 10 men after McKenna was forced to retire. It made the second half easier for the Chesterfield defence but their forwards could make no impression on full-backs Charlie Wilson and Hugh Jacobson. Jock Archibald did not have a serious save to make, and Grimsby ran out 1-0 winners, the game settled by that early Marshall goal.

The season had reached the point when the results of rivals mean just as much as your team's. Delighted at the win, the crowds would have streamed out of Blundell Park and then formed boisterous lines to read the scores as the first evening papers hit the stands. And then an exultant cry: Bradford had lost at Southport. Grimsby's "prospect of promotion [was] indeed rosy". They were top of the league.

In the final part of 1925-26: the last day of the season, and Town need to win for the title and promotion

Thanks to Dave Wherry for the photographs of Jack Hardy and Billy Marshall (copyright holders unknown).