It was nearly 40 years ago that Liverpool taught Grimsby Town to play. But if on the field Liverpool were the greatest in Europe, their treatment of away fans was far from great. 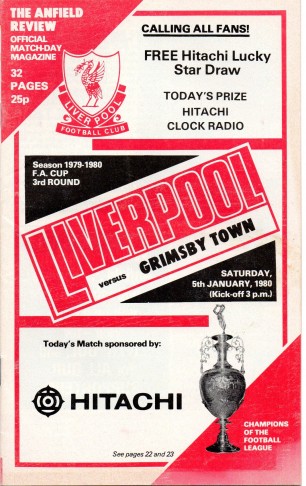 Can you believe that we are rapidly approaching 40 years since Town last won a championship? Under George Kerr's management, Town had an amazing season, including a third-round FA Cup tie against Liverpool on 5 January 1980.

It was a game that many will remember, though not for the 5-0 thumping given to us by probably the best team in Europe. That Liverpool gave Town a football lesson that day is beyond doubt. But for those who were there, the game is probably best remembered for the way the Town fans were treated by both Liverpool FC and the Merseyside police.

K James, an exiled Town supporter living in London, had driven to the game with some friends. Such were his experiences that he was moved to write to Liverpool FC, Grimsby Town FC, and the Football Association. The Liverpool Echo printed his letter under the headline "Grimsby grumbles over cup chaos". It expressed the sentiments of many Town fans who attended the game.

"As a Grimsby Town supporter, I feel I must express my disgust at the way visiting supporters were treated by Liverpool FC at the FA Cup third round tie last week. I arrived in Liverpool at 12.30 pm [and] joined a well-ordered queue of Grimsby supporters at 1 pm. At that time the queue, five abreast, extended for approximately 200 yards from the turnstiles at the Anfield Road end. During the next two hours, the queue moved forward by little more than 100 yards.

"Numerous requests for information tendered to police officers supervising the crowd were met with total disinterest. We were told that only two turnstiles had been opened for our use, and they had no idea whether we would get in or not. At 2.50 pm, the Anfield Road turnstiles closed and the queue of people (now extending for almost half a mile) rushed forward as the police officers broke ranks. Children who had been waiting patiently for a considerable time were crushed and trampled as people rushed to find out what was happening.

"We were then herded like cattle, by mounted police officers, towards the Kemlyn Road end where eight turnstiles were still open. The police told us that we were going into the Kop where 'there was still room for 10,000 people'. I got into the ground at 3.30 pm, having lost contact with my friends, and made the most of the view of one goal, a brick wall, and the side of the stand.

"At half-time, when the Kemlyn Road turnstiles were closed, there were, I believe, about 5,000 Grimsby fans still outside. The famous 'Koppites' were not very pleased about the invasion of opposing supporters and I witnessed some nasty scenes. In the toilets and behind the stand, anyone wearing a black and white scarf, including women and kids, were punched and kicked by gangs of yobs... Many families had been separated and children were crying.

"I hid my scarf inside the lining of my coat, and the Town supporters had, long ago, given up shouting for their team for fear of inciting violence. I stuck it out until the final whistle, and then made my way back to the car. On the way I had to run, on several occasions, to escape pitched battles which were taking place between crowds of Liverpool and Everton fans and the police. On reaching my car, I found my friends had left the ground at half-time, and had been listening to the match on the radio." 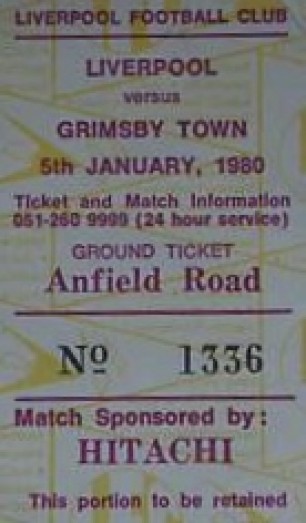 The letter writer went on to ask four interesting questions.

"(1) The police claim that they were not expecting such a crowd of visiting supporters. Why not? It had been widely reported, both in the local and national press, that Grimsby had sold 8,000 tickets, and that between 10,000 to 15,000 non-ticket holders were expected to attend.

"(2) Eight turnstiles had been allocated to ticket holders and two for non-ticket holders. One policeman stated that the police had tried to persuade the [Liverpool] club to reallocate the turnstiles when the number of travelling fans became apparent. The club refused. Why?

"(3) Many thousands of Grimsby supporters were herded into the Kop without police protection. Why?

"(4) Although many more thousands of Grimsby supporters were locked out of the ground, the attendance – at 49,706 – was substantially below ground capacity [the game against Everton earlier in the season drew a crowd of over 52,000, for example]. Why?"

As early as 17 December 1979, the Liverpool general secretary, Peter Robinson, had announced that the cup tie would not be all-ticket. Three days later, that was confirmed in the local Liverpool press, along with prices for admission and a statement that tickets would be available in advance.

Two days before the game, the Liverpool Echo reported that around 8,000 Town fans were expected to be at the game, the Grimsby allocation having been sold, and that extra space in the Anfield Road north terrace was being made available to the visiting supporters. Additionally, the paper reported that there were a "limited number" of stand tickets (priced at £2.50) which would be available to the public on Thursday 3 January 1980.

Robinson responded to the Grimsby letter writer in the same edition of the Liverpool Echo. He claimed that "the problems were mainly caused by so many Grimsby fans travelling without having a ticket in advance". Well, it was Liverpool who decided the game wasn't to be an all-ticket affair and, as the letter writer pointed out, both local and national newspapers had reported that "between 10,000 to 15,000 non-ticket holders were expected to attend". It seems somewhat disingenuous for Robinson to blame Town fans without a ticket for going to a game for which a ticket was not required.

Robinson went on to claim that "we were told at the time of the draw that there would be a large travelling support, so we allocated the whole of the Anfield Road south terrace exclusively for visiting fans". Here, either Robinson (south terrace) or the Liverpool Echo (north terrace) has it wrong.

Apparently 5,500 special tickets were printed and sent to Grimsby, "whom we advised to urge their fans to buy tickets in advance". Like horses and water, you can advise a football fan to buy a ticket, but that doesn't guarantee that they will. Indeed, sales figures bear this out. Of the extra special tickets sent to Blundell Park, only 2,545 had been sold the day before the match, leading Liverpool to conclude, in Robinson's words, "that Grimsby fans would be far fewer than originally estimated."

The Liverpool secretary gave no indication of what 'different arrangements' would have been, but it seems likely they wouldn't have been giving Town fans the option of standing on the Kop or, as one policeman put it, 'fucking off back to where you came from'

Carefully – or otherwise – avoiding a direct answer to the letter writer's second, third, and fourth questions, Robinson simply repeated what seems to be an invalid point about Liverpool's expectations: "Neither we nor the police, who are responsible for crowd control at Anfield, had any knowledge that so many supporters would travel without tickets, so admission arrangements were made accordingly. If all the tickets we sent to Grimsby had been sold in advance, different arrangements would have been made."

Robinson gave no indication of what those "different arrangements" would have been, but it seems likely they wouldn't have been giving Town fans the option of standing on the Kop or, as one mounted policeman put it, "fucking off back to where you came from."

Robinson had the audacity to end his reply with what is surely the weakest claim offered by any football administrator: "It is significant that no complaints have been received from any supporter who bought a ticket in advance." Presumably that was because they hadn't been scared out of their wits standing on the Kop, weren't still queueing to get in while the game was underway, and weren't cowering in their cars listening to the game on the radio.

For many Town fans, their visit to Anfield was memorable, but not in the way that it should have been. Let's leave the final word to the original letter writer. "In contrast to [Liverpool] supporters, the Grimsby fans were impeccably behaved at all times. Many people may regard Liverpool as being the best football club in the world. To myself and 130,000 other people of Grimsby and Cleethorpes, you have a long way to go before that boast can be justified."

Rob is preparing a book to commemorate the 40th anniversary of Grimsby's last title-winning side. It is a season that evokes many glorious memories...

If you remember that or anything else from 1979-80, Rob wants to hear from you. Write to us using our feedback page and we'll put you in touch with Rob.