No advantage: the English FA and the Berkessy affair

Tom Sargent told the story of how in 1954, Grimsby were refused permission to employ Hungarian coach Elemer Berkessy. Here Neville describes what a lost opportunity this was, after decades of insularity had weakened English football.

In the 1940s and 1950s, the state of both the Mariners and of English football more generally sank to unimaginably low levels. I took my football seriously in those days, but I was watching as standards fell and zombies took over all the divisions.

Players like Tom Finney, Stanley Matthews and Billy Wright were the exceptions. In the first two or three seasons after the war, England, Scotland and Ireland still had players of quality such as keeper Frank Swift, centre-forward Tommy Lawton, inside forward Billy Steel and midfielders Raich Carter, Wilf Mannion and Irish international Peter Doherty. But practically an entire generation of players had been lost to the game: as wartime casualties or severe injuries, or simply through the interruption of normal life.

Few remembered how the sophisticated pre-war players performed, and the game became stereotyped. It was played to order, robotic and safety first with individuality and an adventurist spirit discouraged. Attitudes should have changed but the FA and their cohorts figured that all our spectators needed was excitement and one-dimensional football, played at the fastest pace possible with the ball crossed high into the box or over the top of a defence for a centre-forward to run on to.

England reluctantly entered the World Cup for the first time in 1950. They expected to run away with the Jules Rimet Trophy, but the FA had not been doing its homework. Countries like Brazil, Hungary, Germany, Italy and Spain employed the best coaches available, regardless of nationality. With the Grimsby Town director Arthur Drewry in charge of team selection, England were beaten by a United States side of part-timers and three non-US nationals passing through immigration control at Ellis Island.

The defeat should have acted as a wake-up call to our FA chiefs, but nothing changed. It was reasonable to expect a tirade from the national press. But on the same day as the World Cup defeat, in cricket England lost at home for the first time to the West Indies with the famous 'three Ws' – Clyde Walcott, Everton Weeks and Frank Worrell – and the moment was lost, the bad news buried.

Before 1950, as far as the FA was concerned, international football meant the Home Nations tournament. In the 1930s, Grimsby had three England internationals: Jackie Bestall, George Tweedy and Harry Betmead. Town fans used to consider the cap awarded to Jackie Bestall against Northern Ireland in the Home Nations as the most prestigious, but perhaps in retrospect those of George Tweedy and Harry Betmead, against Hungary and Finland respectively, were the hardest won.

As the national game drifted on, a home defeat to 'continental' opposition became an inevitability. In October 1953, England played an exciting contest with a scratch FIFA Rest of the World XI. The result was a 4-4 draw but FIFA should have won 4-2, England helped by the replacement of the FIFA goalkeeper at half time. The match showed up the weakness of England's defensive systems. It should also have helped to prove that football should not be played at a sprinter's pace: that the speed of the ball, directed by a player of intelligence, will beat the fastest footballer any time.

On 25 November 1953, England were to play Hungary at Wembley. The newspapers were full of banner headlines: "Tear in England and Win"; "Hard tackling the way to beat Hungary"; "Hungary's fancy stuff won't beat England." Those views proved outdated. On a grey sports afternoon at Wintringham Grammar School, history teacher Tom Gallon left the staff room and sidled up behind the goal with the not unexpected news that England were losing to Hungary.

The scale of the defeat – 6-3 – proved beyond all doubt that England were no longer the 'football masters'. They were left perpelexed that the opponent wearing number 9 was not necessarily a burly centre-forward, or that the number 3 might play as a central defender, not a left-back.

Dr Willy Meisl, an Austrian and an international authority on football, stated that British followers were never told enough about the development of the game. Sports editors sought personality stories and left the readers to think all was well. Our game still slumbered on with neither coaches nor tacticians appointed from abroad. Yet good coaches who failed to make the grade in the UK worked wonders with teams overseas. The bricks for Hungary's progress were laid by English-born coach James Hogan.

Tthe team stumbled from one disaster to the next. A good question to ask at school: "If team A loses at home to team B by 3-6, what will be the result when the two teams meet six months later on B's home ground?" The answer was 7-1, when England played the Magyars away. One player said of the Hungarians: "They played like men from another planet."

In the 1954 World Cup, England managed a 4-4 draw with Belgium and overcame
Switzerland 2-0. But there was no joy whatsoever with Uruguay; we were a side with little skill and lost 2-0. The English World Cup campaign ended there.

The tone of the newspapers began to change. "These are the lessons. We are the soccer pupils now". "This Missionary Talk is just humbug". "Face facts – we're ten years behind." 'Continental' kits were introduced, together with modern football shoes, rather than the Manfield Hotspur hard toe-cap or knee crusher. (Not all of this reached attentive ears: in 1957, for a game on the south coast, a Yorkshire side literally sharpened its studs before going into battle.)

There were decades of isolation and insularity to overcome: obstinate resistance to any reforms, and refusal to break with outdated methods, from training to tactics to team selection. Sweden had learned about new training and tactics in England before World War I. Now they sent a representative back to bring their ideas and techniques up to date, hoping to find some innovations. He was bitterly disappointed, flabbergasted to find that training in the UK hadn't changed in 40 years.

Players described hours of lapping around the track. Could players be allowed sight of the ball to develop skills on the ball? Some managements believed that too much ball practice made a player stale.

Players described hours of lapping around the track as slow torture. Could this be broken up with players allowed sight of the ball before Saturday, using this freedom to develop skills on the ball? Some managements believed that too much ball practice made a player stale. The outmoded methods of running football were summed up in Len Shackleton's autobiography when he devoted chapter nine to "The average director's knowledge of football" and left the page blank.

There were exceptions to this picture. Wolverhampton Wanderers had initiated their series of floodlit friendlies against leading clubs from around the world, manager Stan Cullis declaring that the "whole future of football in Britain depends on our ability to face the challenge from abroad". Later in the decade, Matt Busby began his revolution and his 'Babes' won Division One in 1955-56 and 1956-57, using players with athletic ability like Duncan Edwards, allied to an instinctive grasp of what the game was about. In his side gifted players like Tommy Taylor, Eddie Colman and Town's future wing-half Jeff Whitefoot brought craft and football nous and skill.

But the idea of employing coaches from outside the UK remained unthinkable, a sign of national weakness.

Now this is where Grimsby Town, and Elemer Berkessy, come in. We had seen the decline and the insularity of English football in miniature at Blundell Park. During the Festival of Britain in 1951, Grimsby hosted the German side Saarbrucken. The myths that foreign teams would kick you to death, were unable to take the simplest chances, and had goalkeepers who would never catch the ball were exposed as Town lost 2-1.

Bill Shankly, one of the few shining lights among British coaches, assembled at Grimsby what he later claimed was, pound for pound, the best team he managed. The football they played was mesmerising. The players had the basic talents such as ball control but they also had imagination and an innate ability to surprise opponents. However, it was a team that relied heavily on those who had learnt the game before the war. The team of 1951-52 broke up, and players of the classical ability of Jimmy Hernon, Bill Cairns, Stan Lloyd et al were not replaced. 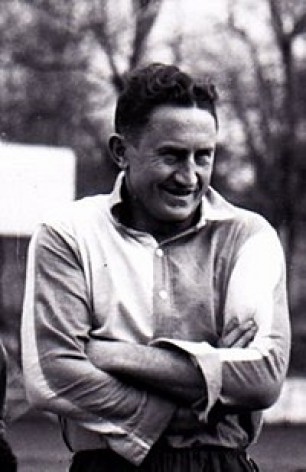 By November 1954, with gates on the slide and Grimsby engaged in a struggle to retain their Football League status, they put themselves at the centre of a minor sensation. They appointed the Hungarian Elemer Berkessy as coach.

Through no fault of his own, it proved to be something of a nine-day wonder, but even in his short stay he managed to convert a very tall 'Bambi on ice', Ray DeGruchy, from a left winger to a left-back. Ray would play 45 games in his new position in the promotion season that followed under Allenby Chilton.

Perhaps Berkessy helped lay the foundations for that success. Was it a coincidence that our amiable trainer Tom Dawson and second team trainer Hughie Jacobson were sacked in 1955 (Tom no doubt taking his training bike with him)? Berkessy was credited with bringing a new approach to training and coaching which might have done well for the Mariners – had it been given the chance.

An exile from Hungary, Berkessy thought he had left a police state. But after only two days working at Blundell Park, the local police informed the club that, as Berkessy had no work permit, he had to cease coaching. Town applied for the permit and we can only assume that Berkessy continued working for nothing, expecting back pay when it arrived.

But the work permit was refused, even on appeal. The FA and the PFA were concerned about British jobs for British people (where have I heard that before?). Elemer had to return to Spain. Thus the privilege of being the first English club to employ a continental coach was denied Town, a loss not only to us but surely to British football as a whole.

The reason quoted by the Minister of Labour, Harold Watkinson, for refusing the work permit was pathetic, as he passed the buck to the FA. The answer they gave, in the very year that Hungary had beaten England 7-1, was that they could not see what advantage an Hungarian coach would have over an English coach.