The life of a Mariner

Bill Dorricott and John England met in 1977, Mariners in the same Derbyshire village. Following Town, home and away, brought them great times. 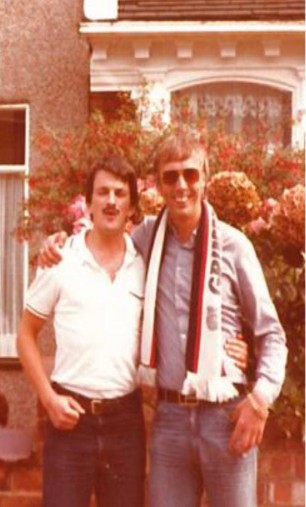 Here we are again, Bill and I, exiles both, having driven the couple of hours from our respective homes in the Derbyshire hills. Three more pints quickly followed and then the second part of our ritual, haddock and chips on the seafront before the third and least predictable part, the match at Blundell Park. Win and we're in heaven. Lose? Well, two out of three ain't bad, so we would joke.

That's how it was for us in the 1970s and 1980s particularly. Resisting the temptation to watch teams more local to us in Manchester, Sheffield or Derby. No, once a Mariner, as they say. It's in your blood, isn't it? Something you can't nor want to get rid of.

Bill was schooled in the 1950s, the 1955-56 championship winning side, captained by Allenby Chilton (ex-Manchester United, of course), alongside the exotically named Raymond de Gruchy and goalscorer Bob Crosby. I was 13 years younger than Bill and my grounding was in the late 1960s, with Matt Tees, Stuart Brace, Dave Boylen and Harry Wainman, who went on to win the fourth division under Lawrie McMenemy in 1971-72.

We met in 1977, as Town were once more in transition, each astonished to find another Mariner living in our small Derbyshire village. We then began our Saturday ritual, home and away – although home meant away too, for us, of course.

Together we witnessed the great era of John Newman and George Kerr and the class of 1979-80, that wonderful team made up of predominantly local boys (the Moore brothers, Tony Ford, Kevin Drinkell et al) who achieved two successive promotions and nearly made it three to the promised land of the top division, narrowly falling short in 1981. What a side they were – my favourite ever Town side – and in my lifetime at least, rivalled only by Alan Buckley's two sides of the late 1980s and 1990s.

We had some great times, blagging our way into the Chesterfield boardroom after a game at their old Saltergate ground in February 1980. We pretended we were with the Grimsby Town directors and nobody rumbled us as we availed ourselves of the fine wine, prawn sandwiches and vol-au-vents following Town's victory. It helped, I suppose, that we'd come straight from work, were wearing suits and that I remembered the name of one of the Town directors to get us past the doorman.

Yes, we had some wonderful times following our beloved team. Great wins and, of course, plenty of defeats. But it's funny how you forget those

Then, in October 1983, when Town were on a terrible away run, not having tasted victory on their travels for over 12 months, Bill and I decided (late one inebriated Friday night) that the run was going to end the following day at Derby County. We decided to mark the occasion by wearing dinner suits and bow-ties to the match.

So it was that we sat with the Derby County fans behind the goal exchanging good-humoured banter throughout. No, we were not on our way to a wedding and, no, we were not part of an orchestra, we were actually there to celebrate a Grimsby Town victory.

That, of course, brought the biggest laugh of all. We only went and won 2-1! We were laughing then alright.

Yes, we had some wonderful times following our beloved team. Great victories like Everton at home in the League Cup, 1979. Taking our seats at Rochdale as we witnessed the home side take a 2-0 lead within five minutes, and we won 5-2. Sheffield United at home to clinch the third division title in May 1980. Everton away, also in the League Cup, a few years later. Newcastle United away in the FA Cup around the same time. Thrashing Manchester City 4-1 in the old second division at Blundell Park. Much later, the two wonderful Wembley victories within six weeks of one another in 1998.

There were plenty of other great wins too and, of course, plenty of defeats. But it's funny how you forget those and your mind takes you back only to the good times.

Bill Dorricott died last month, a true and passionate Mariner for nearly all of his 77 years. I'll be sure to raise a glass or two of Tetley's to his memory next time I'm in the Notts for our time-honoured pre-match ritual.

Send your thoughts on John's article.