A visit to Walsall might not stand out in the fixture list. Except the Saddlers and the Mariners have a hero in common. 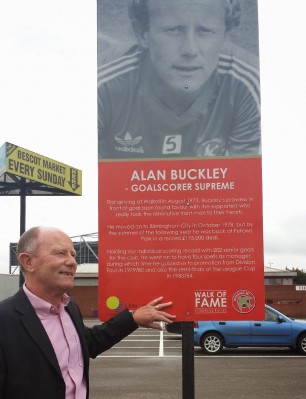 This weekend's fixture at Walsall is hardly one to set the pulses racing. Sure, it's a chance for Town to build on a promising start but we've hardly played them recently: five seasons in the past 32 years. We've no geographic ties with Walsall.

My visits on Saturday will not be my first to the Bescot Stadium. That came in 2013 for a third division fixture against everyone's favourite voyeurs, Stevenage.

We were there to promote Alan Buckley's book and Alan received a rapturous reception at half time. You see, Bucko is a downright hero in that part of the Black Country. Doing the research with Alan, it wasn't difficult to see why.

Buckley is Walsall's greatest goal scorer, notching 202 times in a career that saw him score over 20 goals for five seasons in a row in the mid 1970s. A year was spent in the first division for Birmingham before Alan returned to Walsall as player-manager when he was just 28 years old.

The run included a defeat of Arsenal at Highbury before drawing 2-2 in the first leg of the semi-final at Anfield against a full-strength Liverpool side. Walsall's team including Richard O'Kelly, Gary Childs and Craig Shakespeare. A second-leg defeat followed, but it remains one of Walsall's greatest ever achievements.

Alan's memories of his time at the Saddlers is pin sharp, from his dealings with the eccentric chairman Ken Weldon, to being unceremoniously dumped by a new board in 1986. Sound familiar?

Their loss was ultimately Town's gain.

On that visit to Walsall in 2013 Alan was literally mobbed by fans who had worshipped him from the Fellows Park terraces. One by one they stood starry-eyed, some bringing their son named Alan to finally see their namesake, some with Buckley tattoos and all with unfettered adulation. And all of them called Dave.

A subsequent Evening With event cemented the hero status. It really meant a lot to Alan, as did the reception he received at Blundell Park. It still does today. To have had such an impact on two different football clubs is special and it was a real honour to see Alan so rightly lauded.

Saturday's game would just be another in a season that could be very special. But it's actually a fixture between two teams that share a special football in bond.

Do you remember Alan Buckley as a player? What is your favourite personal memory of him? Tell us