How would Town players fare in fantasy football? Rich does the adding up 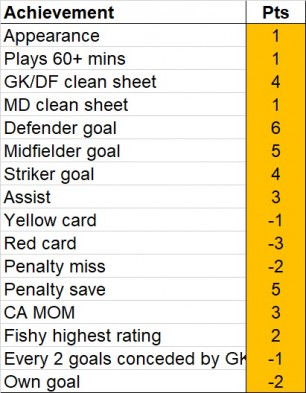 How would Grimsby Town’s players score if their performances were given points based on the Fantasy Football system? Good question. It’s one that we at Cod Almighty aim to answer for the 2019-20 season with the Grim Reality — a monthly feature that uses a totally unscientific methodology to measure the reality of our players’ on-field contributions. For shits and giggles.

The table opposite shows how points are awarded. So what is the grim reality in August?

The first month of the season drew to a close after Town’s victory at Walsall and the Mariners can feel good about the start they’ve made.

After six league games they’re the division’s top scorers with 13 goals and sit in fourth place. Our most glaringly obvious deficiency from last season has been addressed with some smart summer business. New signings have settled in quickly and begun contributing immediately — supported by a core squad that’s been together for a little while now.

Add to that a League Cup win over Donny and a third round tie at Chelsea in the offing if we can get past Macclesfield and all is well at Blundell Park as we begin September — so how have the players scored? 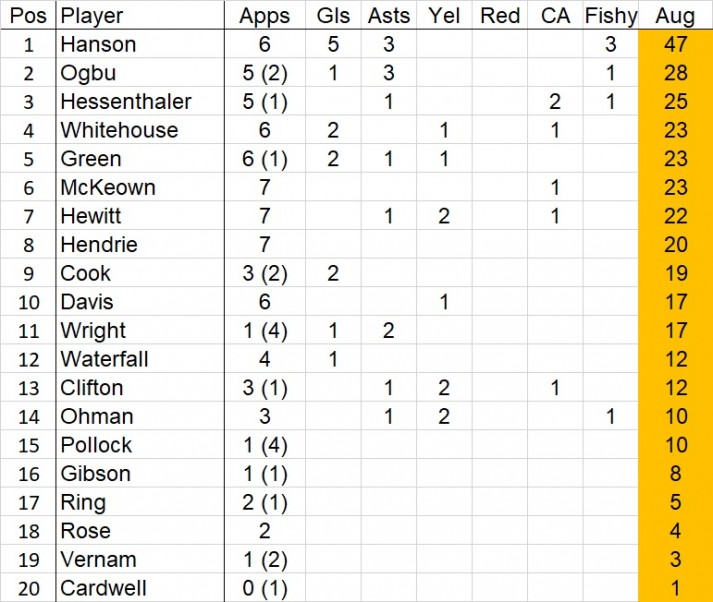 It comes as no surprise to see James Hanson topping the early season table. Five goals and two assists in his first six starts in a black and white shirt is impressive form by anyone’s standards and if he stays fit it’s difficult to imagine how the ex-Bradford striker won’t remain there.

He may have started the season on the bench, but with one goal and three assists Moses Ogbu has made the most of his chance since coming off the bench against the Bantams. Proving that it’s not all about goals and assists, Jake Hessenthaler’s terrific start to the season has accrued him 25 points — including two Man of the Match awards from Cod Almighty.

Two goals from Elliott Whitehouse put him joint fourth in the early running with summer signing Matt Green and club captain James McKeown. Whitehouse became the first player to score minus points in a game this season when he put through his own net against Colchester.

Special mentions for Jordan Cook, who’s amassed 19 points from just three starts, and Max Wright, whose 17 points have come from just one start and four sub appearances. Two assists in his last two games, in addition to his strike at Morecambe, suggests he’ll be involved in plenty more — if he’s given the opportunity.

The highest individual score on any game week came from Hanson, whose goal and two assists against Port Vale earned him 14 points. Whitehouse scored 11 in the opening day win at Morecambe.

Town have another seven matches in September — at the end of which we’ll stare the Grim Reality straight in the face once again.