On the doorstep of the club

Kerry William Purcell grew up literally in the shadow of Blundell Park. Here he shares his memories of how he discovered Town as a young boy in the seventies and what place the club held in family life.

From the moment my family moved to Blundell Avenue in 1969, we were immersed in the life of the Mariners. I grew up in a street where the routines and patterns of daily life ran parallel to the those of the club.

Living in the shadow of the floodlights, the football calendar merged with the natural seasons, creating an almost instinctive ebb and flow between the two. Life's milestones became synonymous with the ups and downs of the club. Everything from Christmas, birthday celebrations, royal wedding street parties, playing with friends, getting a girlfriend, breaking up with a girlfriend, getting drunk, all became indistinguishable from cup matches, relegation battles, reserve games, the changing of managers and the arrival of new players.

I never went inside Blundell Park for the first five years of my life, but everything around the life of the ground held a kind of enigmatic wonder for me. One of my first memories, at possibly three or four years old, is of waking up thinking it was morning, but upon opening the curtains I saw a very bright light shining into my garden from a floodlit night match and then heard the noise of a crowd. How could such an experience not impress itself on a young boy? It was from such moments that the football ground took on an aura of specialness and attraction.

Before I even stepped inside, I had become quite adept on match days at reading the build-up to the game. How many away fans (with their strange accents and shirts) were walking down the street? How many police horses were there? How many away coaches were parked along Harrington Street? Had the police put out the 'no parking' cones? Could I hear the fans singing from my back garden? All indicated how big the game would be and also how well – or poorly – Town were playing. This was also the case post-match. Were fans leaving early, running down the street to catch the bus? Could I hear boos on the full-time whistle?

In the darker days of recurring outbreaks of violence, I saw fans being chased down the avenue by police on horses and, on one occasion, a Leeds United fan actually ran through our house to evade capture (much to my mom’s alarm). At the end of the day, if Town had won, I would sit on our front garden wall sarcastically waving at the players as the away team coach thrummed down the street. I would often bump into their striker or manager buying chips from the chippy on Grimsby Road (now the Gr8 White Fish) before getting back onto their coach. Everything about matchdays had a rhythm and expectancy that filled me with excitement. 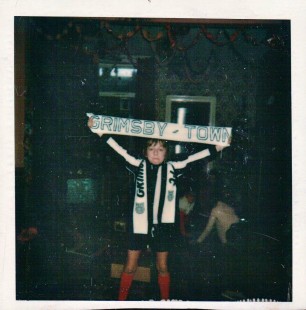 ed to my pestering and took me to my first game, possibly Town against Blackpool. I say possibly because my only memory of the game is of orange shirts contrasting sharply with the banks of snow along the edge of the pitch (Since this article was first published, we've looked into this with Kerry and can now confirm that the opponents were actually Mansfield on 12 February 1977 - Ed.). My dad had probably helped to clear the snow off the pitch too: something locals around the ground would regularly do in exchange for a free ticket. I stood on an upturned bottle crate so I could see over the wooden fence (God, this is turning into jumpers for goalposts).

The Harrington Street corner was always our preferred spot, down by the corner flag. This offered a perfect vantage point to see the goal but also, more importantly, to see the Pontoon. I loved to watch the swaying of the crowd and to hear the songs, all of which filled me with just as much excitement as the action on the pitch.

I loved being lifted off my feet by the sway of the crowd; the rush forward when we scored. It was exhilarating and I was slightly in awe of the guy with the deep gravelly voice who started the "give us a G" chant

It would be a few years before I ventured into that melée. As a small boy the spectacle filled me with a kind of sublime fear. In time, the attraction was too much and when old enough I gravitated to the back of the 'Ponny': the left-hand corner, to be precise, from where most of the singing still originates.

Although it's now seen as potentially dangerous, I loved being lifted off my feet by the sway of the crowd; the rush forward when we scored. It was exhilarating and I was slightly in awe of the guy (I’m sure some of you will know his name) with the deep gravelly voice who in the 1980s who would start the "give us a G" chant.

This nostalgic reverie does not allow me to forget the piss trickling down the steps from the guys at the back of the stand who couldn't be bothered to queue for a half-time wee.

Living so close to the ground, one would often see the players throughout the week. In fact, before the 4x4s and detached houses in the suburbs, quite a few of the players would lodge in the streets around the ground, and for the kids of Blundell Avenue they were fair game for free tickets. In their short walk to the ground on a Saturday, we would scurry alongside asking, "Got any spares?" and every so often we would be in luck (with Nigel Batch often being the most generous).

But it was on non-match days that living next to the ground came into its own. With the Main Stand gates open, we would often sneak in to watch the occasional training session. Sometimes we would be kicked out, but every so often we were allowed to stay. On one memorable day, we were cocky enough to ask if we could join in and I think it was Batch again who said yes and that they were going to the training ground and we could jump in the minibus! When we got there me and my friend were given a ball to kick around while the players got on with training drills.

Afterwards we travelled back to Blundell Park, where we got to have a bath in the home dressing room! I just sat there in the grey, tepid water thinking to myself, "I’ve never been in such a big bath," and "I’m sat next to Kevin Drinkell!" Everything, from the rough towels we used to dry ourselves, to the "what are you doing here?" looks we got from backroom staff before finally running back home to tell my parents, has never left me.

Getting on the pitch

Getting on the pitch as a player was always a dream, but never a reality, and the closest I got was being a mascot. Before clubs began to charge for "matchday experiences", Town would draw names from a hat. At 10 years old, I was picked to be the mascot for the home game vs Cambridge (29 November 1980 - Ed.). Running out onto the pitch in front of a 7,500 crowd was an unforgettable day. As some of you will remember, the players would line up in the middle of the park and wave to the crowd before Joe Waters would kick the ball towards the Pontoon, where the mascot would kick it into the goal. 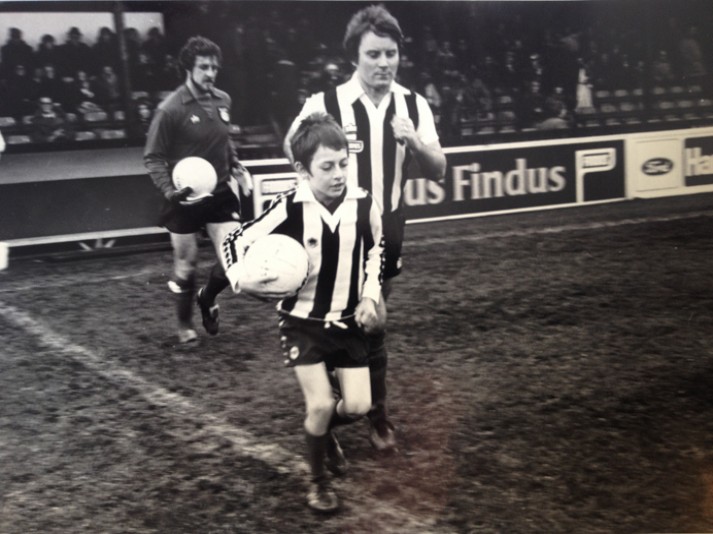 On this particular day, I ran after the ball, totally focused on blasting it into the back of the net but much to my embarrassment my pathetic kick meant the ball got stuck on the muddy goal line! The Pontoon roared "Ooooh!" but I then got a sympathetic cheer when I kicked it off the line into the goal.

My parents still live on Blundell Avenue, in the same house they bought fifty years ago. When home on match days, I still leave at 2:45pm with my dad. These days the Main Stand is our preferred residence, being a stand that seems like a natural resting place for fans who have grown with the club. As with my move there from the Harrington Street corner, via the Pontoon, each stage in the life of a Town fan seems to be marked by different parts of the ground (although the guy who shouts "bloody useless, Town" seems to have been in the Main Stand since the 1970s).

After the full-time whistle, we walk back home (a bit more slowly these days), where my mom has usually prepared us some tea, which is eaten on laps watching Final Score. The glow of the floodlights still shines through the curtains as it did when I was a child, and the team buses still thrum along the avenue (although I guess the dietary consultants no longer allow a quick stop at the chippy).

While many elements of the modern game have changed, Grimsby Town remains a club at the heart of the town. While our eventual relocation is inevitable, the streets surrounding Blundell Park continue to be part of the club, with many away fans expressing pleasure at the club’s traditional location. For me growing up in Blundell Avenue, my childhood and my life as a Town fan were indistinguishable and for the future of the club, that’s surely something we want for all young Mariners.

This article was originally published in Town's matchday programme The Mariner. Many thanks to Kerry and The Mariner editor Jack Johnson for generously allowing us to share this with anyone who might have missed it first time around.