A good day out at the football is often preceded by a good night out, a warm-up. Wicklow had touched down early Friday afternoon and Scott arrived early evening amid a swarm of impersonators. Seriously, about twenty fellow arrivals looked like him. Distinctly Scott-ish, if you will.

We limbered up for the big event with a quiet night out in Newton Abbot which ended with some local characters imparting wit, wisdom and marriage counselling and also showing us their trainers. We politely made our escape as things appeared to be heading downhill rapidly.

Match day arrived and a short hop on the bus to the town centre. The first football shirt of the day was an Exeter away. Day-glo. Ugh. The second sighting was what we thought was Town's third kit but it turned out to be QPR's from last season. Weird, right?

This fixture usually draws about 250 Mariners travelling from all points and by all modes. After some excellent bagels we saw our first Town shirt of the day on the short walk to the ground. Had they come far? No, from Paignton! You know the type of chat that ensued: schools, friends in common, are we going to win today but more importantly, where can we get a nice glass of Prosecco at this end of town (answer: you can't)? Brief, yet a nice little part of following Town to an away fixture. 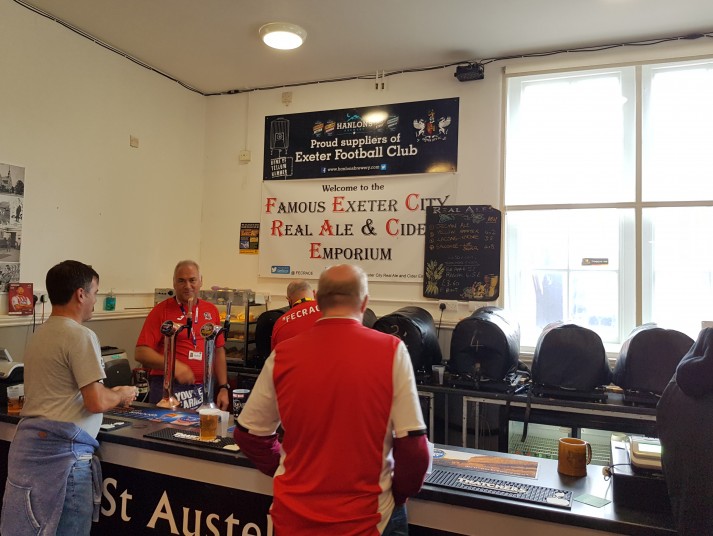 Exeter City are a nice club, aren't they? Everything about them is geared up to welcome visiting fans. It would be rude not to spend an hour or two in the FECRACE, seeing as they've put so much into it and so we did, as Barnstaple Mariner Adrian Budd regaled us with stories of idiot stewards at Chelsea, pulling cars out of ditches at midnight, upsetting the local hunt and scrapping with marines. We all earned entries in Histon Mariner's notebook and received a detailed explanation of the in-situ skittle alley from the head barman. 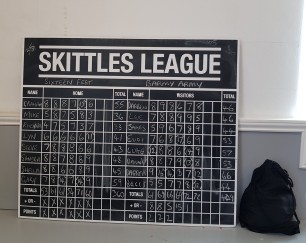 But City aren't just about good ales and skittles: they've completed their ground redevelopments too. St James Park is now a very respectable ground. The Big Bank stand looks ace for starters. Four thousand capacity too. It's one of four fine individual stands, all cantilevered and without a pillar in sight.

Good views – but that's not all. Modern stadium builds often overlook important design principles. You should always be able to see trees and rooftop chimneys from inside the ground. Points of ingress should be available for animals such as a fox or a bored dog looking for a pitch to invade on a Saturday afternoon. Stands should be large enough to accommodate fans and facilities but not so large that you can't thwack a clearance over it or send a failed goal of the month contender soaring into a neighbouring garden.

St James Park meets all these criteria, all a short walk from the town, sandwiched between the tree-lined railway line and terraced houses. It's basically a set of floodlight towers short of all you could want from a football ground.

The away accomodation is a compact terrace with seating in the side stand. For the record, 261 of us were in attendance. The proportions of the ground and stand made it look and sound like more. This is how it should be, not like Colchester for instance, where large stands have the opposite effect.

Those of you not at St James Park will have followed the game on Twitter or listened in on Radio Humberside (FM, no less!). You'll have seen the goals on Quest and nodded knowingly as messrs Murray, McSheffrey and Appleton enthused about Town's performance, particularly Ethan Robson's goals and workrate. So what can we tell you that you haven't already picked up already?

The minor controversy of the EFL appointing a Devon referee was offset by the Grecians' belief that Brett Huxtable had cost them the points at a visit to Cheltenham with a dubious penalty call. So any raised eyebrows from Town were more that Builder Brett was carrying some extra timber. A right unit, in common parlance.

We can also confirm that despite the official Exeter City tweet, Mitch Rose remains a Notts County player and did not turn out for the Mariners on Saturday. We are not Liverpool. This confusion on City's part was in no way down to guest team sheet announcer Craig Bryan who had clearly read out Ahkeem.

Town lined up all 4-3-3-ish with McKeown; Hendrie, Waterfall, Pollock, Gibson; Cook, Hessenthaler, Robson; Rose, Ogbu, Wright starting and Davis, Green, Hanson, Whitehouse, Vernam, Hewitt and Russell on the bench. Enforced changes after Wednesday's exertions or a change of tactics to counter the unbeaten Grecians? The hosts had 11 normal-sized blokes with no hair worthy of remark. What a sensible lot, no wonder they are top of the table. Top of the fashion stakes too, with Dave Smith sure to have noted their smart black and white hooped socks for a future Town kit.

From the terrace behind a goal, one gets a different view of proceedings than from a side stand or watching on the telly. It's hard to tell if the team is playing 4-3-3, say, or more like a 4-5-1. What we do see from behind Macca's goal is how well organised this team is, and especially what a good partnership Waterfall and birthday boy Mattie Pollock make. Pollock is a hell of a player. There's no way we'll hang on to him. A little like Exeter a couple of seasons ago with young Ethan Ampadu, who headed off to Chelsea, we're not a big enough club to retain talent like that and so we should enjoy it while we can. He'll go far. Further than Doncaster or Rotherham.

Town defended our end in the first half. We'd expected Exeter, as league leaders and seeking a club record unbeaten run, to be on the front foot. This wasn't the case and there was little goalmouth action of note before we went ahead after 23 minutes. Max Wright caused Exeter bother all afternoon and earned a corner on the left. The big boys came up but Hess played the ball to the left edge of the area where the lurking Robson de-cloaked to swing his left boot, not his head, and hit an absolute peach into the top right corner.

Would Robson's opening goal stir Exeter from their slumbers? Not really. They huffed and puffed but Town were really solid

Would this stir Exeter from their slumbers? Not really. They huffed and puffed but Town were really solid. We weren't tearing them apart and creating chances, but there were moments of nice passing, and the speed of Wright and Rose meant Exeter had to be on their guard. More than anything, everyone knew their position and was doing their job.

Exeter did have a couple of moments: a ball was fizzed across the six-yard box which startled the horses and San Marino's Potential Number One palmed away a long-range curler. And that was the first half. The half-time cuppa reflected on a good Town showing but also prepared us for what was coming. The Exeter players were probably going to get a half-time rocket up their arses and the game would hinge on the five to ten minutes after the break. If we could withstand the inevitable bombardment, we had a chance of winning.

That's how it played out. Waves of Grecian attacks floundered on the mighty noggins of Waterfall and Pollock or were gathered by McKeown. Pollock had a great game on his birthday and was even good enough to lay on a party trick for the assembled guests. At the height of the Exeter surge, McKeown clawed at an awkward looping cross which looked like it was going to drop on or just under his crossbar. There was a bit of a scramble and a Grecian boot poked the ball along the goal-line. Enter Pollock to save the day by somehow smashing the ball to safety via the crossbar, just as it looked like it was bobbling in.

Eighteen, eh? If Pollock lined up against your kin at a schools match, you'd be demanding to see a birth cert. He's a beast and was fantastic again. He lost maybe one header all afternoon. Their striker Bowman took off like he had jet boots to win a flick-on, catching Mattie in the face in the process. Hard but fair. Play continued as Mattie lay on the turf, looking around to exchange insurance details. Bowman had already left the scene. Mattie got up and quickly tracked him down in time for the next aerial ball. Boom, and this time it was Bowman who ended up on the ground. Harder, still fair. Some kid.

So we withstood their pressure and then had a party of our own. A break from defence and Rose got his wedge out and chipped a lovely ball for Wright to run on to. Into the area and about to pull the trigger, Max was bundled over by the last defender. Clear penalty, with the culprit receiving a yellow card. Ogbu looked a bit uncertain as he took the ball but, with with a short, slow walk-up, swept the ball low and hard past Ward and into the corner of the net. We might just do this, you know.

His role in the penno was Rose's last action of the day and he made way for Hanson on the hour.

The third goal was special. If you haven't see it by now, go seek it out. Once again Wright was the tormentor, breaking away on the right as Exeter pushed forward, looking to get back in the game. He showed vision and skill to float a perfect cross to Ogbu. Two beautiful touches laid the ball in to the arriving Robson. Our hearts were already soaring but it got better. A feint to shoot with his left sent the covering defender sprawling and rooted the goalkeeper, leaving Robson to clip the ball in with his right. A beautiful ballet which sparked much rawer dancing behind the goal.

Gibson then stepped aside for Davis; minutes later, Ogbu left the field to cheers and Whitehouse entered the fray. City hurled everything at it and things got scrappy. Boots flew and cards were dealt out quicker than a croupier could manage, including one for Grecians manager Matty Taylor with five minutes to go. To be fair to Taylor and the protesting players and fans, they had just had an excellent penalty shout ignored by panto villain referee Huxtable. Quite similar to the one he had awarded at the other end 25 minutes earlier.

Cook made a play for goal of the season on 90 minutes before a barrage of attempts at the other end eventually produced a consolation goal but it didn't matter. Town had more than matched the high-flying Grecians and taken the points against the odds. Didn't see that coming? Baz Whittleton did. 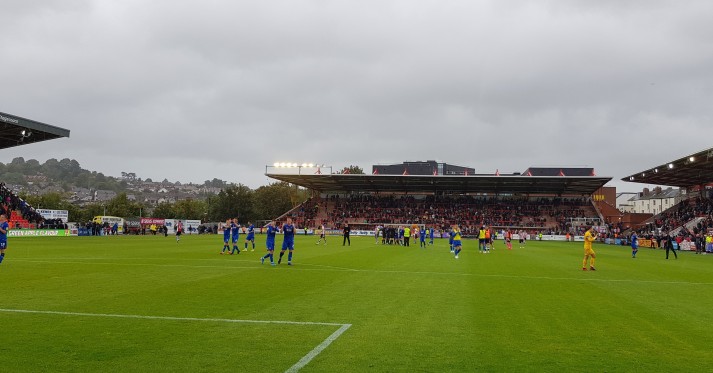 We said our goodbyes as the assembled Mariners headed off and headed round the corner to meet a West Ham-supporting mate who has been at the last three of these fixtures. A veritable blur of beers led to us dancing to a local band and singing "Luke Waterfall" as they gave the Stone Roses classic a run through (yes, there is a video of one of our number performing this, but we are of course far too discreet to share it) before we headed back to Chez Mills for pies and gravy and the last few minutes of Match of the Day.